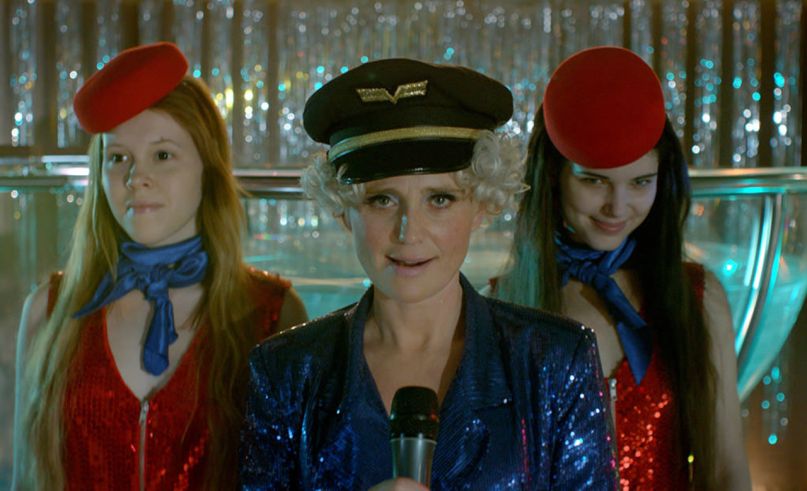 Bookmark and follow our exclusive coverage of the Sundance Film Festival 2016.

The Lure is a disco-tinged punk/new wave rock opera about a pair of young mermaids ashore in Poland, hired to use their unique body-shifting talents to perform in a seedy burlesque club. At the risk of lapsing into hyperbole so early in an assessment of its many merits, director Agnieszka Smoczyńska’s feature-length debut lapses into the sublime early and often, starting with a brief prologue that introduces said mermaids and immediately smash cuts to a fevered disco performance, all of which culminates in a seedy nightclub owner lustily caressing one of their fish tails and the vaginal opening atop it. If by now you are not sold on the film’s appeal, it’s likely you never will be.

And that’d be a shame. The Lure somehow manages to seamlessly assemble a film equal parts hilarious, affecting, and grisly while trading and warping aesthetics and tones by the scene. Once the assured Golden (Michalina Olszańska) and the more naive Silver (Marta Mazurek) find their way to land, they’re quickly inundated with the many opportunities and consequences of being attractive young women in the modern world. And when they reveal their unique talents before long, which they can apparently toggle based on how wet or dry they are (the pun is likely not accidental), that world greets them with lust and revulsion alike.

Soon they’ve been pulled into the orbit of the club’s relatively popular house band and, in a most troublesome development, the hunky blonde bassist Mietek (Jakub Gierszal). As Silver starts to fall for Mietek and Golden realizes the danger of her companion truly giving over her heart to a mortal and what that love could potentially make her do (think The Little Mermaid), they also become the club’s star attraction, making their names on the titular rock group. And to reiterate, all of this plays out as a psychedelic goth musical, with Zuzanna and Barbara Wrońska’s infectious music leading the charge. The increasingly outrageous numbers run the gamut from snotty punk to dreamy, aching pop to an early number that uses the heavily choreographed, brightly colored aesthetics of a Disney performance to delve into a bit of frank irony about their shiny, new urban lives; together, the young women wax enthusiastic about how “the city will tell us what we lack.”

And that it does. On the surface, The Lure is all style and madness, a wild overture into a rather common tragedy of relationships made and lost between lovers and siblings alike. But what Smoczyńska understands, like the best filmmakers dabbling in the musical genre, is that the greatest strength of spontaneous performance is the emotional catharsis it offers. There’s a stark contrast between the industrial black-and-blues of the city and its surrounding bodies of water and the ecstasies of the hedonistic lifestyle they so quickly adopt that Smoczyńska turns into a lens through which she can explore all manner of dialogues about gender, from reclamation to abuse to transition, all while Golden and Silver rip their way through blast-beating ballads encouraging the lecherous denizens of the club to “put your hand deep inside me/ drag me out into dry land.”

That overarching sense of lusting sexuality hums through The Lure, from the many ribald and erotic setpieces throughout between Golden and Silver and the many people who become enraptured by their particular condition for various reasons, but essential to the film’s success is Smoczyńska’s unwillingness to treat Golden and Silver’s respective awakenings as anything more than autonomous choices made by young women becoming aware of how powerful their constantly changing bodies make them. It’s a blunt metaphor, to be sure, but it’s nevertheless effective in no small part because of Olszańska and Mazurek’s starring turns, which fuse burgeoning sexuality with a potent undercurrent of deep longing and angst. They don’t belong in this world, and they know it. But they like it just the same, and that’s the trouble.

On a less heady level, The Lure is also just a hell of a lot of fun from the first moments to the moving finale. The film’s periodic fits of grisly body violence are doled out judiciously enough to hit hard on both the camp and genuine horror levels, and Smoczyńska wisely and carefully metes out the film’s effective, organic CGI only when needed. Sometimes the horrors are left to a carefully placed bit of colloquial sound design or a silhouette of a possibly still-beating heart carried around with teeth. This is a wildly assured debut and a primal jolt of honest-to-God originality that demands to be witnessed.