The Best Celebrity Film Cameos from A to Z

The ABCs of cool celebrity guest spots, from Armstrong to Zane 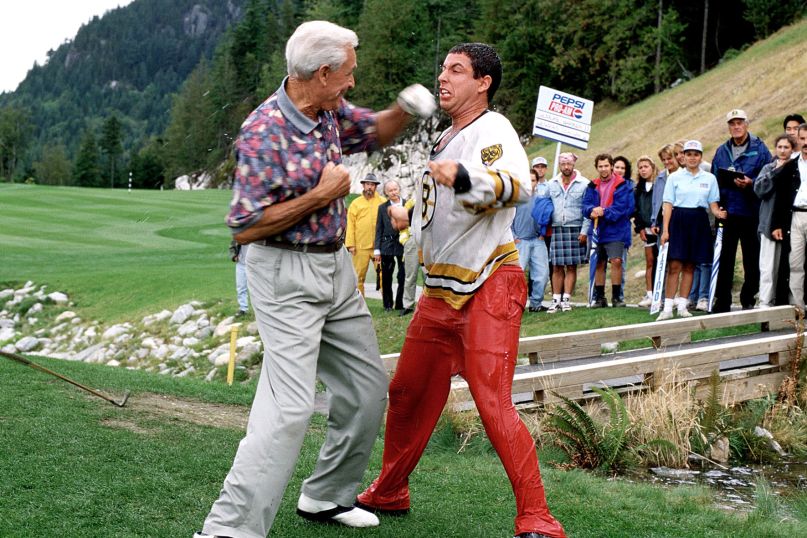 Bob Barker wasn’t the first actor to play himself in a movie. He’s not even the first person to punch Adam Sandler repeatedly in the face (just a guess). So what is it, exactly, that makes his “bitch” so unforgettable? Is it the super-white hair? The perfectly-pitched anger? The swagger? Or is it, just plain and simple, the fact that he’s doing it under his own name?

Whatever the cause, Barker’s cameo in Happy Gilmore — now marking its 20th anniversary, in case you were looking for a new reason to feel old — was instantly iconic, something it has in common with many a celebrity cameo on film. But whether their appearance is unforgettable or under-the-radar, watching a famous person take the piss out of themselves remains a pretty surefire way to squeeze one more joke into a movie. Some celebrities are funnier than others. Some can act, and others can’t (looking at you, Brett Favre). Some play against type, and others lean into their existing reputations. But every single one of them said yes, and that’s pretty cool.

Here now, a children’s treasury of celebrity cameos, from Armstrong to Zane. Share it with the D-lister in your life.

A IS FOR LANCE ARMSTRONG

One of the forgotten shames of Armstrong’s doping revelation is that it neuters what was, to date, one of cinema’s all-time greatest guilt trips. Armstrong’s cameo in 2004’s Dodgeball, in which he blithely mentions his personal successes and determination in front of a dispirited Vince Vaughn, was so much better when we still thought of him as a hero: “I guess if a person never quit when the going got tough, they wouldn’t have anything to regret for the rest of their life. But good luck to you, Peter. I’m sure this decision won’t haunt you forever.” –Clint Worthington

B IS FOR BOB BARKER

The man, the myth, the legend. The reason for this list. The celebrity cameo to end all celebrity cameos. The one and only Bob Barker. Bitch. —Allison Shoemaker

C IS FOR CHANNING TATUM

In a movie that’s nothing but celebrities playing themselves, it’s hard to pinpoint who most steals the show. This pick could easily have been Michael Cera (the coke fiend), Emma Watson (the water-stealing warrior), or the heavenly chorus that is the Backstreet Boys. Still, the winner’s gotta be Channing Tatum, who leapfrogs out of a malevolent Danny McBride’s trailer of horrors, willingly chained to the man who made him his sex slave. “I love him,” he murmurs and then goes back to humping McBride’s leg. God bless you, sir. —Allison Shoemaker

D IS FOR DAVID BOWIE

“I believe, I might be of service.” Cue the title card for David Bowie! And throw in his track “Let’s Dance!” Ben Stiller’s manic lampooning of the modeling industry features a cavalcade of fashionistas, but when Bowie shows up for a glorified referee job, few cameos scream with such authoritative cool. Because who knows more about fashion than Mr. “Fashion” himself? –Blake Goble

E IS FOR EMINEM

Funny People is a fine movie where Judd Apatow has Adam Sandler play someone a lot like Adam Sandler and then gives him cancer. It’s dour, self-indulgent, and occasionally wonderful. One of those moments, hand to god, comes down to Marshall Mathers. Eminem, it seems, would rather die than be famous, and he absolutely does not love Raymond. —Allison Shoemaker

F IS FOR BRETT FAVRE