"I remember thinking, 'Wow. I'm witnessing firsthand the fearlessness that I've read about" 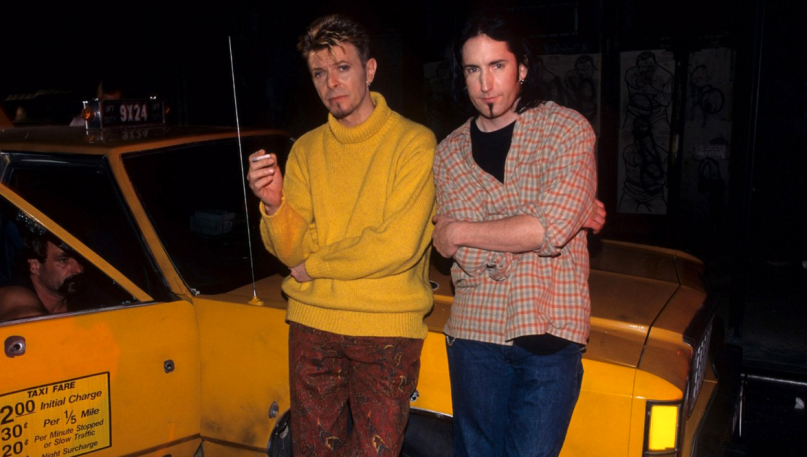 The latest issue of Rolling Stone is dedicated to David Bowie and includes a number of tributes penned by his longtime collaborators. Among them is a heartfelt essay from Nine Inch Nails frontman Trent Reznor, who famously toured with Bowie in 1995.

Reznor began his essay by discussing his early memories of Bowie and the influence he had on his own career.

“For me, every Bowie album has its own set of memories. Back in the heyday of records, I’d go over to my friends house and listen to his collection of records in his basement. Scary Monsters was the first one I related to. Then I went backwards and discovered the Berlin trilogy, which was full-impact. By the early Nineties, as I found myself onstage with an audience, I was in full-obsession mode with Bowie. I read into all the breadcrumbs he’d put out — the clues in his lyrics that reveal themselves over time, the cryptic photographs, the magazine articles — and I projected and created what he was to me. His music really helped me relate to myself and figure out who I was. He was a tremendous inspiration in terms of what was possible, what the role of an entertainer could be, that there are no rules.”

The two would later join forces for The Outside Tour in 1995. Reznor recounted his unwillingness to have Bowie serve as the tour’s opening act, and also remembered Bowie’s disinterest in playing the hits.

“At one of our first meetings, in rehearsals, we were talking about how the tour was going to go. I was faced with a strange predicament: At that moment in time, we’d sold more tickets than he did in North America. And there’s no way on earth David Bowie is going to open for me. And on top of that, he said, ‘You know, I’m not going to play what anybody wants me to play. I just finished a strange new album. And we’re going to play some select cuts from a lot of Berlin trilogy–type things, and the new album. That’s not what people are going to want to see, but that’s what I need to do. And you guys are going to blow us away every night.’ I remember thinking, ‘Wow. I’m witnessing firsthand the fearlessness that I’ve read about.’

“We found out a way to do the show that made sense, where it all felt like one experience. We’d play stripped down, then David would come out and he’d do ‘Subterraneans’ with us, and then his band would come out and we’d play together, then my band would leave. One of the greatest moments of my life was standing onstage next to David Bowie while he sang ‘Hurt’ with me. I was outside of myself, thinking, ‘I’m standing onstage next to the most important influence I’ve ever had, and he’s singing a song I wrote in my bedroom.’ It was just an awesome moment.”

Reznor also discussed how Bowie helped him overcome his battles with drug and alcohol addiction.

“There were a number of times where the two of us were alone, and he said some things that weren’t scolding, but pieces of wisdom that stuck with me: ‘You know, there is a better way here, and it doesn’t have to end in despair or in death, in the bottom.’

“A full year later, I hit bottom. Once I got clean, I felt a tremendous amount of shame, of my actions and missed opportunities and the damage that I’ve caused in the past. And I thought back to the time when we were together a lot, and I wonder what that could have been like if I was at 100 percent. The ‘I’m Afraid of Americans’ falls into that category of me at my worst — out of my mind and ashamed of who I was at that time. So when I see that, I have mixed feelings — grateful to be involved, and flattered to be a part of it, but disgusted at myself, at who I was at that time, and wishing I had been 100 percent me. And it nagged me.

“A few years later, Bowie came through L.A. I’d been sober for a fair amount of time. I wanted to thank him in the way that he helped me. And I reluctantly went backstage, feeling weird and ashamed, like, ‘Hey, I’m the guy that puked on the rug.’ And again, I was met with warmth, and grace, and love. And I started to say, ‘Hey listen, I’ve been clean for …’ I don’t even think I finished the sentence; I got a big hug. And he said, ‘I knew. I knew you’d do that. I knew you’d come out of that.’ I have goosebumps right now just thinking about it. It was another very important moment in my life.”

Read Reznor’s full essay at Rolling Stone, and revisit their collaborative performance of “Subterraneans” from The Outside Tour below.