Where in the World Is the Wayans Family?

With Don't Be a Menace turning 20, Blake Goble wonders where the Wayans are now 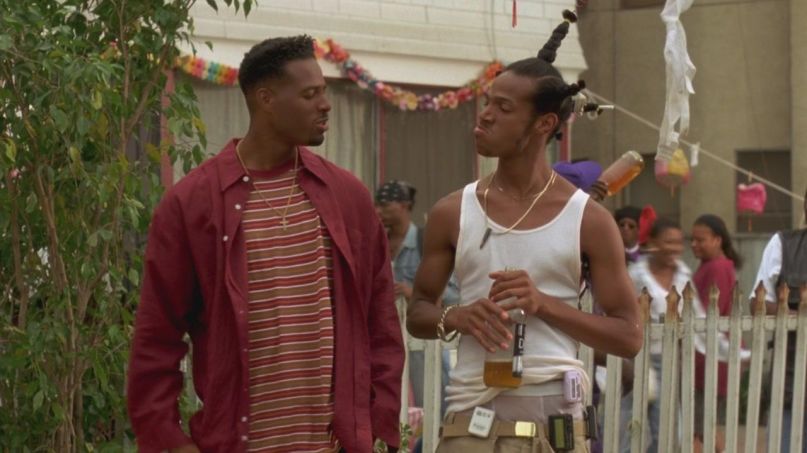 While recently revisiting the Wayans family’s 1996 cult comedy Don’t Be a Menace to South Central While Drinking Your Juice in the Hood (to be abbreviated as Don’t Be a Menace from here on out, thank goodness), a handful of thoughts crossed my mind.

The movie has aged fairly. More to the point, it’s aged both well and badly. The film feels like the rushed product of genre crapshoot policies at Dimension, fulfilling a very small order for spoofs on hood films of the day. It looks cheap, the jokes don’t always hold up, and it admittedly takes a minute or two to recall films like Dead Presidents and Menace II Society. Then again, sometimes the funnies are just that. Take a running gag about “The Man,” for example. The leads are repeatedly sabotaged by plain white men who slink in and out of situations, capitalizing on outrage and suspicions of foul play surrounding big events in the ‘90s like the O.J. trial and the death of Tupac Shakur.

But really, the biggest takeaway from Don’t Be a Menace, watched years later, is the question of just where the Wayans family has gone. Or rather, why haven’t they made anything of this kind of zany quality in years? Where’s Keenan? And Shawn? And Marlon? And Damon? And Kim? And all their kids? And why have the ones who have stuck it out been sketchy at best? (Looking at you and your Haunted House spoofs, Marlon.) Just what exactly has become of the Wayans family? Why don’t they produce more? Sure, some are around, but with mixed outputs, and others have just seemingly vanished. In looking back at Don’t Be a Menace, one can’t help but think of the film in terms of “Where are they now?” and “Why not more of the good stuff like back in the day?”

It seems like forever ago that the Wayanses came on the scene like a modern comic dynasty, ready to spread the gospel of their spastic, often-offensive, frequently tear-inducing comedy. For a period, the family became their own best running gag, capitalizing on nepotism by creating a Jacksons-like workflow of constant comic mania. The Wayans were social satirists, lampoon artists, and provocative funny-people. They knew no limits, and works like Don’t Be a Menace and Scary Movie gave grotesque goofballs like Sandler, Farley, Mel Brooks, and the Farrelly brothers a run for their funny. Looking back at the now 20-year-old Don’t Be a Menace, one has to wonder about the Wayans family. Were they no longer valuable? Were there no good roles left? Were some of them sick of the industry? Is Marlon Wayans all that’s left holding the hambone torch for the family? Let’s retrace their steps. Bring that beat back!

In the ‘80s, a young Keenan Ivory Wayans was working his way up in the entertainment world with small roles and side projects. He played a stand-up comedian in Bob Fosse’s Star 80. He was on CHiPs, Cheers, Benson, and 12 presumably fabulous episodes of For Love and Honor. Wayans busted out something fierce, though, with his 1988 directorial debut, I’m Gonna Git You Sucka. It was a decade-late riff on the blaxsploitation films of the ’70s, but the film was a modest hit for MGM and has endured with a cult status. The movie showed Keenan Ivory’s promise as a third Zucker brother, or a fifth Marx brother, what with his knack for parody and absurdist dialogue. Look at how Wayans was able to take Jim Brown and Isaac Hayes (Slammer and Hammer, respectively) and put them into a bit on ribs with Chris Rock that gives “Who’s on First?” a linguistic love letter of sorts:

The humor wasn’t a total revelation but gained notice. Additionally, the family fun was evident. Literally every known Wayans (Kim, Damon, Shawn, Marlon, Nadia) had parts in the film. Sucka became a quickly definitive calling card, and it landed Keenan Ivory a deal at the then-new Fox network. The Wayans family broke onto the scene with their feisty, funny, and often #problematic sketch show In Living Color (Oh “Handi-man”…). In the Married… With Children era of Fox, the Wayans were a smash hit. Homie the Clown (awesome), Fire Marshal Bill (gross, but what’s up, Jim Carrey?), Men on Film (oof), and a host of other buzz-worthy skits made the Wayans family a staple in the early ‘90s. The show was socially relevant, madly ribald, and often just straight-up offensive, but most importantly it was funny as hell. And here’s the part of this article where we have to link to the catchy theme song.

Now here’s where the Wayans family grew in popularity, but in different ways. In 1994, Keenan Ivory took an unsuccessful stab at directing and starring in an action comedy, A Low Down Dirty Shame (it has one great scene where Keenan Ivory sings James Brown to Rottweilers). Damon Wayans had a nice solo acting career with the hit comedy Mo’ Money. Damon’s Blankman, while amusing as superhero satire and pitched as a comic adventure of sorts, failed to land with audiences in 1994. Still, the Wayans were in demand as a brand in outrageous comedy. It was expected of them, which sucks, because they were clearly hoping that comic attention could lend itself to more advanced, even serious roles. Such is the struggle for humorists trying to cross over. The same blowback happened to Eddie Murphy. Jim Carrey was met with all kinds of fascination when he went serious, then back to comedy, then serious again.

Hello, Don’t Be a Menace. Shawn and Marlon, with their cachet from In Living Color, wrote the script. Paris Barclay, a TV helmer with a ton of credits, directed. Keenan Ivory cameoed. Kim too. The film opened to less than sweet reviews, but the thing made a hearty profit, and Shawn and Marlon became stars. The humor swings from desperate to divine. It comes from a place of love for the hood films of the ‘90s and a simultaneous heightened awareness of their clichés. It was crass and unpolished but often funny. The jokes about racist shop owners, graphic sight gags, and blunt-force vulgarity still make for something wild 20 years later.

When Marlon, as a bafflingly accented hood, brandishes semi-automatic weapons while sporting pink bunny rabbit slippers, the comedy of contrast is so simple but nicely executed. When he pulls a gun on a woman and demands she give him her number, wincing occurs, at least until she pulls a gun on his nuts in return. The humor’s there, committed, extreme, even a little shocking. Such is parody. At a clean $39 million in returns, Don’t Be a Menace kind of sealed the deal for the Wayans family as spoof artists. They got pigeonholed. And, to sling the old adage, you’re only as good as your last movie.

So what happened next to all the Wayans? There was Keenan Ivory’s action movie career with The Glimmer Man and Most Wanted: flops. He also had a failed talk show in the late ‘90s that’s vanished from the popular consciousness. And Damon had fair hits with the family comedy Major Payne and the ABC sitcom My Wife and Kids.

But it was Shawn and Marlon’s work on the Scary Movies in 2000 and 2001 that brought the family untold fortunes. It was like Airplane for the hard-R set. Penises getting shoved through ears. The ghost face killer drinking 40s while re-enacting the “Wazzup” commercials. Nadia from American Pie getting her head sliced off and still being able to whine and scream. And that’s just the 2000 movie, which was a top-10 box office super smash. Scary Movie, co-written by Shawn and Marlon with several other writers and directed by Keenan Ivory, was the Wayans in their public wheelhouse: dirty jokes and nasty jokes and WTF jokes.

What happened next was a damn shame. Marlon, Shawn, and Keenan cooperated on the maligned but still appealing White Chicks. The movie was a modest hit and had such an insane gag comedy idea; black men disguised as white women infiltrating the Hamptons is a preposterous, arguably great idea for a movie. Then came 2006’s Littleman, also a Keenan-Marlon-Shawn joint. It was a weird idea about a robber who happened to be a midget disguising himself as a baby. The breast-feeding jokes, the big-dick baby jokes … it wasn’t great, and audiences weren’t down with the Wayans’ seeming homage to Looney Tunes for teens. In 2009, Dance Movie barely made a dent and saw the Wayans merely writing with small roles. Damien Dante Wayans, son of Nadia and nephew of Keenan, directed.

And then the Wayans were somewhat disbanded. This is why family reunions must be so hard: tracking down where the hell everyone is.

Damon Wayans Jr. became the face of the family as a regular on popular shows like New Girl and Happy Endings, along with movies like Let’s Be Cops. Damien Dante hasn’t really directed much, but appeared on VH1’s Single Ladies. Marlon’s still visible in his own low-budget spoof movies (A Haunted House 1 and 2, the upcoming Fifty Shades of Black). He’s also been a bit player in movies like The Heat and Requiem for a Dream. Shawn … well, IMDB has credits for him in a few things, but he’s been off screens for some time. Kim’s had a very quiet career showing up in indie films and TV shows. Damon Sr. hasn’t written or acted since 2011. Keenan Ivory pitched a reboot of In Living Color for FOX in 2012, but allegedly he and the head of Fox at the time didn’t feel the episodes were good enough to air, and the project was scrapped.

The Wayans family is still out there, just in a multitude of capacities and popularities, and in looking back at Don’t Be a Menace for its 20th anniversary, one realizes that while one Wayans may vanish from the spotlight, another will likely pick up the torch, or a newer, younger Wayans will be in something that demands attention. The film holds up as a piece of the then-burgeoning Wayans family pie, tickling the funny bone in wild ways, but it’s even more compelling as a brief history of this circus of brothers and sisters in a peak moment of popularity. Who didn’t want to hear something silly from Marlon, Shawn, or Keenan? Whether it’s their offbeat humor or sheer pervasiveness, the Wayans are an arguably great American family of comedians with a knack for reflecting on the times, or just telling a good joke. You just have to wait and see whose turn it is to tell the next one.