Overly slick production and vague lyrics leave uncertainty: "What was so wonderful?" 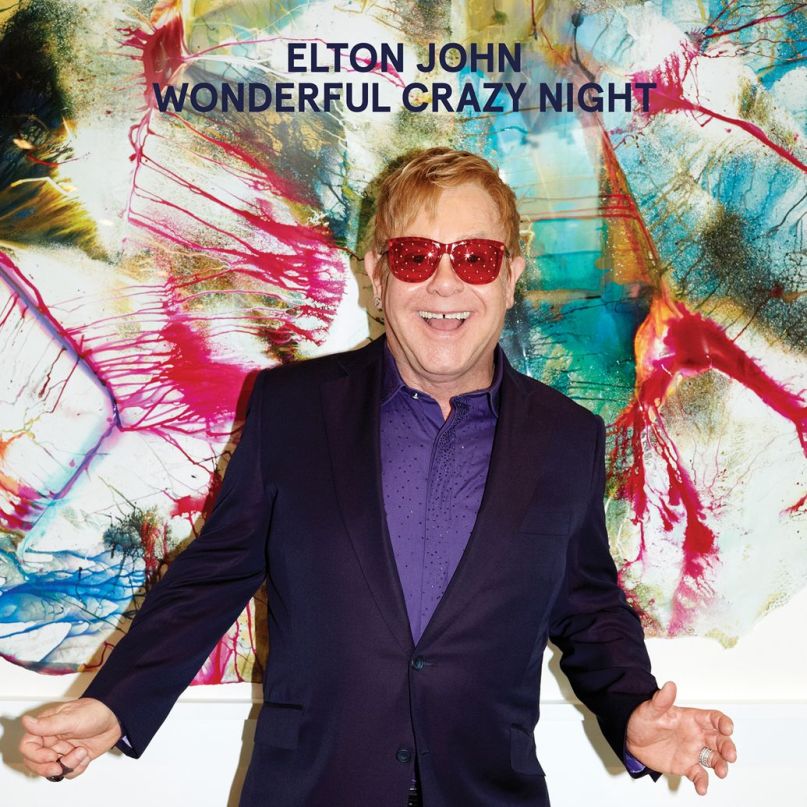 If used correctly, positivity can allow a song to get by solely on vibe. Nothing off Andrew W.K.’s I Get Wet is lyrically profound or even lyrically that good, but because the guitars are so metallic, because the drums are so committed to their boneheaded momentum, and because the gang vocals have so much conviction, you actually root for Andrew Wilkes-Krier when he repeats something as stupid as “Party hard” or “She is beautiful” over and over. When the arrangement and delivery are so invigorating, it doesn’t matter what the lyrics are, as long as they’re optimistic.

Elton John is a much more lyrical artist than Andrew W.K., but his 32nd album, Wonderful Crazy Night, could and should adopt a similar musical charge, as, unlike 2013’s The Diving Board, it’s a work focused almost exclusively on optimism. That doesn’t mean guitarist Davey Johnstone needs to crank up his distortion or John should bloody his face with a brick for the album cover — it’s more about the energy conveyed by the music, a jolt to make the listener believe that the night mentioned in the title track was indeed as wonderful and crazy as John says it was. But under the production of John and T-Bone Burnett (back again after The Diving Board), the instrumentation on Wonderful Crazy Night is glossy yet separate, as if each part was recorded in its own high-end echo chamber. As a result, none of it sounds unified — more high-fidelity karaoke mix than a band that’s playing together. That renders the pleasant and catchy chord progressions on “Good Heart” just that: pleasant and catchy. Not powerful.

The sonic blandness wouldn’t matter as much if John’s eternal lyricist, Bernie Taupin, was more specific in the songs’ appreciation of life. John keeps repeating how he’ll “never forget what a wonderful, crazy night it was” on the opener, but what was so wonderful and crazy about it? The only details we get are some mentions of a calypso moon, a cool drink, loose clothes, and ice cubes on the neck. Okay, so the narrator is in the Caribbean. But what’s he doing in the Caribbean? What happened in the Caribbean? And why is he so happy about it?

The same goes for the doe-eyed ballad “Blue Wonderful”, which hinges entirely on a color metaphor that doesn’t make much sense. “Addicted like I am to the blues,” John (and, indirectly, Taupin) sings about his lover. “The kind of blue like all the blues I need.” Besides being clunkier than electric boots, the line doesn’t tell us much about the couple’s relationship, beyond the fact that they love each other. And true love is so much more interesting than that, as Taupin should know. But that doesn’t stop him from turning to the device of vague romantic comparison once again on the final two tracks, this time in more musical terms. On “Tambourine”, John, in his chestiest tenor-turned-baritone, likens himself to a tambourine, and guess what he compares his partner to on “Open Chord”?

He and Taupin are forgiven for being maudlin. That’s always been part of their shtick and, if we’re being fair, who they genuinely are as people. But “Levon”, “Rocketman”, and even more recent songs like “Oscar Wilde Gets Out” all blend sentimentality with detailed character studies, thus giving the listener insight into the larger-than-life emotions John likes to sing about and Taupin likes to write about. They do that exactly once on Wonderful Crazy Night: “I’ve Got 2 Wings”, a mini biography of holy bluesman Reverend Utah Smith, whose paper wings that he wore onstage transform into real ones when he ascends to Heaven. Since Taupin actually provides some details about his historical subject, it’s easy to invest in Smith’s journey and take solace in his celestial reward, regardless of your religious beliefs. The bubbled-over bass and table-side accordion still have the same overly slick quality as the rest of the album, but there’s enough there lyrically to keep things interesting.

Lead single “Looking Up” has the opposite strength. Nothing more than a celebration of life, the song’s self-confident platitudes become the real deal when backed by John’s barrelhouse piano — the one time his signature instrument manages to break through the production’s detaching sheen. If Wonderful Crazy Night did this more often, or if Taupin delved further into the lyrical specifics of a life well-lived, it would be a lot easier to buy into their enthusiasm. Otherwise, it feels like you’re just being told about it.