Mothers – When You Walk a Long Distance You Are Tired 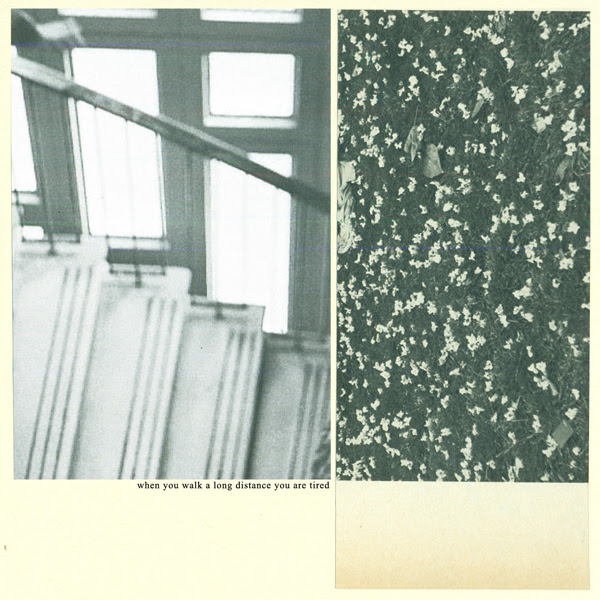 Music has clear therapeutic qualities. Any music junkie will be happy to tell you about the comforts their favorite album gives them, how it heals their wounds, how it articulates their emotions. It’s the only spoonful of medicine worth downing repeatedly. The debut full-length from Athens, GA’s Mothers fits in this category. The album’s title, When You Walk a Long Distance You Are Tired, comes from a book frontwoman Kristine Leschper found several years ago in a French village. Filled with banal sentences, the book aimed to teach young boys English, its pages stacked with lines so simple that they force the reader to apply their own context. And so an educational matter became rich with personal applications. Mothers’ album does the same.

Leschper writes lyrics fit for pickpocketing. They’re mantras to repeat in the morning. They’re late-night thoughts that challenge the past. They’re slips of hope worth cradling when despondent. Opener “Too Small For Eyes” sees her croon over mandolin, her voice thin and shaky like Angel Olsen, trying to strike up bravery. “We lived unloved in unmade beds/ You wore me like a necklace/ You closed me like a locket,” she sings, tapering off each note as if tears are forming in the corners of her eyes. “I think I’m at my best when nothing’s needing me.” Then there’s “Blood Letting”, a song that reaches out to the listener through the sympathies of a fractured relationship the way Sharon Van Etten would. “I’ve been finding new knives to kiss with,” she sings, somehow keeping it light. Loneliness plagues her, and, by the end, she’s aware of its widespread reach: “God is stuck singing himself to sleep/ I am not the only one.” Her words are both what break you and what heal you.

Like all impactful records, When You Walk a Long Distance You Are Tired elevates its words with sharp, aware, and plush instrumentation. Drummer Matthew Anderegg and bassist Patrick Morales bring the energy of math rock to “Copper Mines”. Through alternating tempos, the song sneakily builds towards a mountainous end, full of crashing cymbals and twangy guitars that stir up your emotions. “Lockjaw” brings a similar post-rock cacophony. As Leschper’s voice nosedives after each musical pause in the song, the rest of the band gears up for dramatic rousing, throwing themselves into the mess with unwavering commitment. Even “It Hurts Until It Doesn’t”, the pop tune of the bunch, uses crisscrossing guitars and hushed shakers to keep ears actively engaged. Coy playfulness and modest creativity are essential to these songs.

When You Walk a Long Distance You Are Tired began taking shape when Leschper was still a solo act, hashing out songs in 2014 while still enrolled in art school. That intimacy can’t be faked. Taking those personal songs and expanding them to a full band highlights the inherent vulnerability, tenderness, and honesty. Would-have-been acoustic songs like “Paradise At Last” now haunt when horns and vibraphone (played by Deerhunter’s Josh McKay) pool into noise distortion.

When Leschper created Mothers, the very thought of playing with other people left her feeling inadequate. That’s key. She constantly forces herself to deal with ego and self-doubt in the creative and personal world. Over the course of the album, she confronts these things with a cadence (and varied musical style) akin to Waxahatchee or Lady Lamb. And by the time closing number “Hold Your Own Hand” appears, she’s withered and worn in the most beautiful way. Wonder fills its cautious pacing. She fingerpicks the guitar like a lullaby, beside a muted bass drum, before guitarist Drew Kirby joins her, their instruments dancing with a profound glow. In human form, it’s the moment someone looks up at the stars, their back pressed to the grass, and imagines the presence of a loved one next to them. “Keep those little hands/ Right there in your pockets,” she sings. “I can’t say I believe them.” Why should she? Leschper, like most everyone, has been burned, but there’s resolution in the song’s tone, even if the lyrics harp on betrayal. She is healing. Mothers is the force that allows her to do so. Luckily, listeners can discover that same solace, and it’s hard to imagine anyone passing over a record that gifts its medicine in such a heartfelt package.

Essential Tracks: “Copper Mines”, “Hold Your Own Hand”, and “Lockjaw”