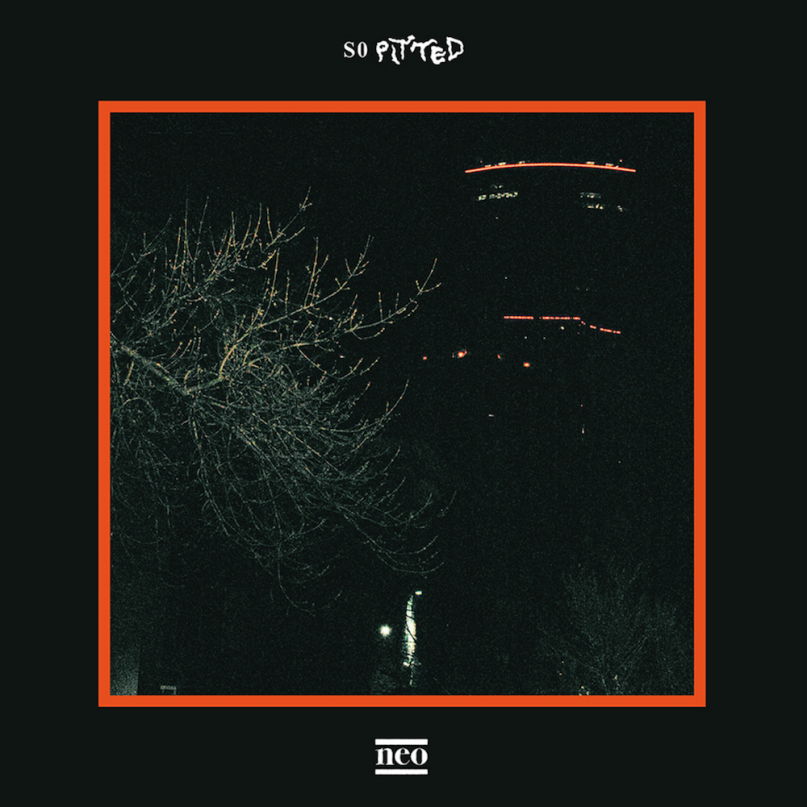 The term “negative” gets a bad rep. Often it’s associated with the most common definition: “not desirable.” Yet, it also means the absence of something, which is a powerful concept. The theory of wormholes is totally dependent on the idea of negative mass keeping them from imploding. It’s the balance against the positive that keeps many aspects of our universe in check.

So Pitted exists in that necessary negative space. In an interview with Seattle Weekly in 2014, the band’s vocalist and guitarist, Nathan Rodriguez, explained that most of his writing comes from “feeling doomed,” adding that “everything sometimes can be a downer.” This mindset makes them entirely capable of exploring existential dread, but instead of taking on the sins of the galaxy, they focus their terror on their own slackerdom. And that’s exactly where So Pitted excel most on their Sub Pop debut, neo.

Within the first few seconds of opener “cat scratch”, the pent-up fear and terror ooze out of their amps like a vile sludge. Liam Downey’s drums crackle in the mix, pushing just how far the speakers can go without blowing out, while Jeannine Koewler’s guitar lines rumble menacingly in the background through her bass amp. Rodriguez completes the trifecta with his sharp and murky guitar lines. “I’ve got no shame,” he screams, like an alien from hell. The band doesn’t let the listener ease into the experience of neo; instead, they just throw them right into the sonic riot to fend for themselves.

This feeling never lets up. So Pitted forces listeners into the band’s lows, soaking them in the negative matter of riffs and pounding drums until they understand neo’s fear and loathing. Each song exposes more and more of the band’s anxieties, manifesting them into a spreading disease on the track “woe”. “Am I gonna die?/ I am not alive,” Downey chants, switching duties with Rodriguez—something they do throughout the record. Later, Downey declares there’s a vortex in his brain and a portal in his body. His physical form is ripping apart in metaphysical ways, and the tattering music underscores this. Each instrument pulls away from the others until there’s nothing left.

So, all this said, why would any listener want to experience this? Is this “fun” at all? In a weird way, it is. It comes down to the initial appeal of punk. Catharsis and candor are embedded in these explosive tracks. So Pitted tap into the void that the likes of Black Flag and Nirvana looked into and saw themselves in. Some people call this void your 20s. Rodriguez captures this best at the beginning of “the sickness”, where he slowly bellows, “Every single day I take a look at my dreams, and they’re all soaked in piss.” That’s a surprisingly relatable feeling. It’s self-deprecating, gross, and honest.

Rodriguez returns to this idea on “no nuke country”, where he laments “feeling tired all the time.” And it cannot be understated just how much Downey and Koewler bolster this. Downey’s kick drum on “no nuke country” sounds like Beelzebub pounding against the front door, demanding entry. It stands pronounced among the clamor with its deep, round sound. Koewler drops out for a bit before coming back in on the chorus with a fuzzed-out blitzkrieg. Rodriguez may have the mic, but each member finds their own way to channel their inner torment. Single any element out, and it’s going to be devastating on its own, but together they become enough force to create that hypothetical wormhole.

It’s uncanny how they can use something sounding so big to pinpoint the smaller aspects of life. On the thrilling “rot in hell”, Rodriguez shreds his voice screaming about sleeping in until noon as if he’s announcing the apocalypse. Every part of life carries this weight in his shaky hands. Downey’s kick drum thunders again, underlining the doom that comes with feeling you don’t have your life together — the pulsing heartbeat felt in your throat as your vision starts to blur from fright.

Koewler’s low guitar line on “get out of my room” is one of the steadiest things on the record, but it doesn’t put anything at ease. It’s the perfect coloring to accent Downey as he warbles in his best monotone: “Everybody wants to hurt you/ Trust no one/ Somebody wants to kill you/ Trust nobody.” Koewler heightens the paranoia by giving some footing to the listener, making it so they can hang on and endure every little bit of mania without falling over.

Nowhere is this done better on the record than “feed me”. Koewler’s bass stings in a looping progression during the intro, while Downey uncharacteristically holds back in a simple pattern. Downey throws in a smattering of atonal notes on his guitar, building up the tension before slowly chugging along with the rest. His nebulous vocals come through in static, pleading twistedly, “Need you. Want to. Love to. Feed you.” He sounds like an extraterrestrial trying to mimic human behavior and speech. And, really, that’s the epitome of So Pitted. They live among us, but they inhabit a part of our world that feels foreign to most, or that at least most people try to avoid. They’re trying to find normalcy in their lives but still devolve into hyper hysteria.

Bands like So Pitted need to exist to balance out the positive matter in our world. neo bathes in worries, stresses, breakdowns, and doubts. It’s not always pleasant, but necessary for identifying the worst of ourselves before it’s too late and everything implodes.