For better or worse, John is the face of the "Based on the Hit..." era of musical theater 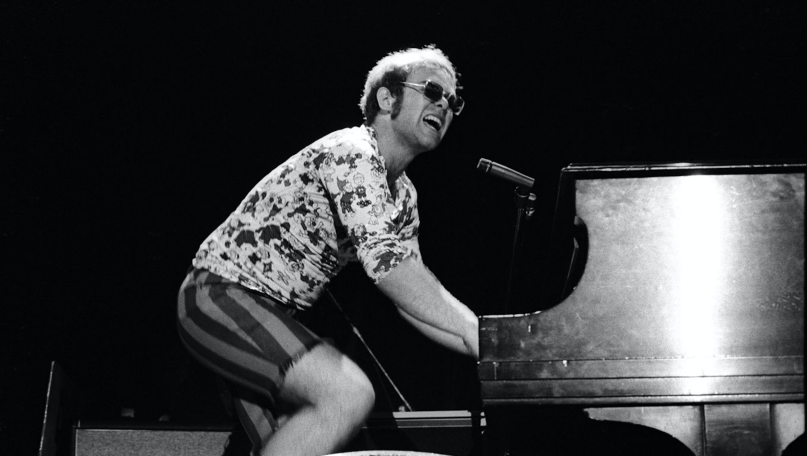 Sir Elton Hercules John. Commander of the Order of the British Empire, six-time grammy winner, seller of 100 million singles and 200 million albums, fashion icon, LGBTQ groundbreaker and role model, tireless activist, charity founder, and member of both the Songwriter’s and Rock and Roll Halls of Fame. As if that weren’t enough, he’s one of the most successful composers of musical theater in that medium’s distinguished history.

John wrote the music for the 3rd, 36th, and 68th longest-running Broadway shows, and, lest we be accused of trans-Atlantic prejudice, the 10th and 15th longest-running shows in the more lengthy history of London’s West End. Musicals, of course, are collaborative affairs, and yet it is noteworthy that he’s accomplished all of this with three different directors, two different lyricists, and a different book-writing team for each new project. (In the parlance of musical theater, the “book” refers to the narrative structure and all the spoken dialogue.)

All of that success began on the silver screen.

The shift to the world of musical theater was one of many changes in John’s life at the time. Publicly bisexual since the ’70s, he announced he was gay in 1988 and entered rehab for substance abuse in 1990. Disney’s decision to hire him in 1991 might seem a curious choice for a company so obsessed with family appeal, but he was hardly the first gay man on the payroll. One notable example is Howard Ashman, the witty, literate lyricist for The Little Mermaid and Beauty and the Beast, who had died of AIDS just after the latter film opened and who by all accounts was a beloved and deeply mourned member of the Disney community. While Walt Disney was a famously intolerant anti-semite, and his animation studio had developed Sleeping Beauty and other glaring examples of helpless femininity, his company had by the mid-’90s quietly become a force for feminism and progressivism.

John’s place as a pop superstar also created opportunities that are as near and dear to the Disney brand as any peppy princess. I’m referring, of course, to cross-platform marketing. “Can You Feel the Love Tonight” was not only the eventual winner of the Academy Award for Best New Song; it was also ubiquitous on radio airwaves, peaking at #4 on the Billboard Hot 100, while “Circle of Life” got all the way to #18. This happy cycle of a hit movie advertising a hit song advertising the movie again is one of the reasons The Lion King was the highest-grossing Walt Disney Animation Studios property until Frozen.

In terms of artistic quality, the stage musical The Lion King might have improved on the original, and in terms of commercial success, it blew the film away. The stage musical has now made over six billion dollars – more than the top six highest-grossing Harry Potter films combined. Credit Julie Taymor’s inspiring puppetry. Now nearly 20 years old and still running strong in theaters all over the world, The Lion King remains as fresh and vivid as it was on opening night.

It is a curious truth of the arts that while some successes seem to follow campground rules, leaving their environment better off than they found it, other works of art, despite their many positive qualities, somehow make everything worse. Many observers have noted how Jaws and Star Wars — great films in their own right — helped create the summer blockbuster, which has come to dominate the movie industry to the point that serious films aimed at adult audiences are now something of a niche, kept in multiplexes only by that relentless publicity machine called the Oscars.

Musical theater experienced a similar tipping point in 1997 when The Lion King debuted on Broadway. From the 1940s until then, musicals had been undergoing a half-decade renaissance. The innovations of Rodgers and Hammerstein — that every song and dance number should further the plot, rather than serve as a diversion — gave way to the realism of West Side Story and the avante-garde successes of Steven Sondheim and Cabaret. The rock operas of the ’70s became even more like opera in the ’80s, both in singing style and narrative scope. When the Walt Disney corporation released a string of movie musicals whose quality rivaled any stretch by Sondheim or the Gershwins, there was every reason to believe in the creative health of the American musical theater; it had been steadily evolving since the ’40s, and it would continue to do so.

Not that there weren’t signs of change. If The Lion King was The Big One, the seismic shift that forever changed the landscape, then London megamusicals like The Phantom of the Opera and Les Miserables were the first few tremors. Producer Cameron Mackintosh concocted tourist catnip out of lavish spectacles and gorgeous melodies — the first to perfect the business model that can be summed up as, “Find a nice theater in a large city, and never ever leave.”

The difference was that The Phantom of the Opera and Les Miserables were based on older novels. Both were blockbusters when they were released, but by the time the musicals were developed, audiences had mostly never heard of Gaston Leroux or Victor Hugo. This isn’t to imply that The Lion King was the first Broadway show based on a recent movie, or even the first based on a recent Disney movie (that credit goes to Beauty and the Beast, which was tepidly received by New York critics, but still managed to make quite a bit of money). The success of The Lion King, however, was of a different order of magnitude, and Hollywood studios took note. Just about everyone who had ever produced a movie looked at their back catalog and wondered which of their properties could be stretched into billions.

While this was happening, Disney was trying to get The Lion King band back together, but John and lyricist Tim Rice weren’t interested in another animated project, and so the decision was made to develop a musical directly for the stage. A few years prior, Disney had purchased the rights to a children’s story written by the famous soprano Leontyne Price, based on the opera Aida by Guiseppe Verdi. With a book by the trio made up of the great American playwright David Henry Hwang, Linda Woolverton (Disney’s best-kept secret and the screenwriter most responsible for Disney’s amazing run of ’90s animated movies), and Chicago stage director Robert Falls, they got to work.

In the meantime, the landscape of Broadway had changed. Rudy Giuliani’s administration had been successful in its attempts to overhaul Times Square, and harsh new zoning laws meant that the pornographic movie theaters of the ’80s were gone. Rent was going up across the city, and as that included the leases for Broadway’s 40 playhouses, producers were more risk-averse than ever. London transfers became increasingly common. Non-musicals hired movie actors and plastered their faces on every poster. The phrase “Based on the Hit…” became as much a part of New York culture as oversized, foldable pizza. In this environment, it’s not surprising that the original musical that premiered at the Palace Theatre on March 23rd, 2000, had the cumbersome title Elton John and Tim Rice’s Aida.

Like The Lion King, the music for Aida is a pastiche of different styles, eras, and cultures, all strained through the colander of John’s particular pop sensibilities. Standouts include the reggae-inspired “Another Pyramid”, the glorious gospel sounds of “The Gods Love Nubia”, and the wry fashion satire “My Strongest Suit”. But it wouldn’t be an Elton John musical without a crossover power ballad. John teamed up with country singer LeAnn Rimes for another radio hit, “Written in the Stars”. This song is a hell of an earworm, although I doubt it was very well served by its music video, which features John and Rimes serenading snow globes filled with nude, apparently nipple-less mermaids.

The successful second act of John’s career had perhaps left him feeling bulletproof, and he quickly embarked on two more musicals, both opening in 2005, which together show the best and worst of the new “Based on the Hit” musical world. Lestat, an adaptation of Anne Rice’s The Vampire Chronicles, has sexy vampires and some nice tunes, but closed less than a month after opening. The novel’s large cast of characters and numerous locales felt, in the three-hour stage production, more like CliffsNotes than a proper story. The lyrics were by John’s longtime collaborator Bernie Taupin, who had worked with him throughout his solo career, and the words are a bit too on-the-head; characters explaining that they are angry or sad or lonely so plainly that it hardly bears a first listen, let alone a second.

In contrast, Billy Elliot: The Musical is nearly perfect: a playful, political, foulmouthed tale of a young boy in a mining town who trades in boxing gloves for ballet shoes. John saw the movie premier at the Cannes Film Festival, and by his own account was left in tears. “The story of young Billy, a gifted working-class boy with artistic ambitions seemingly beyond his reach, had so many parallels to my own childhood.”

Working Title Films approached John to write the music for the planned stage adaptation, and he agreed on the condition that the screenwriter, Lee Hall, also write the lyrics. Whether it’s Hall’s influence, the fact that John was alive and writing during the mining strikes of the 1980s, or his growing maturity as a composer, Billy Elliot sounds more period appropriate (and less like John) than any of his other musicals. Songs like “Deep into the Ground” and “Expressing Yourself” mine the English pastoral sound that was popularized in America by The Kinks and David Bowie’s very earliest albums. Depression-era protest songs influenced opening number “The Stars Look Down” and the great, glorious fugue “Solidarity”, which has a dance class and striking miners going through their different paces.

If there’s one standout single, though, it’s “Electricity”. John covered his own song — his 63rd and, to date, final entry on the UK Top 40 — but his voice isn’t quite right for his melody. The song is best served by a young boy’s tenor.

After Billy Elliot transferred to Broadway in 2008, it was nominated for 15 Tony Awards — that’s every category for which it was eligible — and it took home 10 trophies. It also marked the end of John’s decade as a composer for musical theater. The Lion King is still running and looks poised to continue to do so for at least another 10 years. Aida and Billy Elliot have both closed on Broadway, and Billy Elliot will shutter its West End production this April after 4,600 performances.

This period in musical theater history, the “Based on the Hit…” era, would certainly have come about without the help of Elton John. It might even have come about without The Lion King, although my guess is that it would have been slower to arrive. But from the period of 1994 until 2005, John was the most successful composer working in musical theater. Even if the corporate takeover of Broadway and the West End is a net negative for the creative health of the industry, that doesn’t diminish John’s remarkable decade-long run, and even if some musical theater fans wouldn’t consider him an all-time great, most would admit that he at least belongs in the conversation.