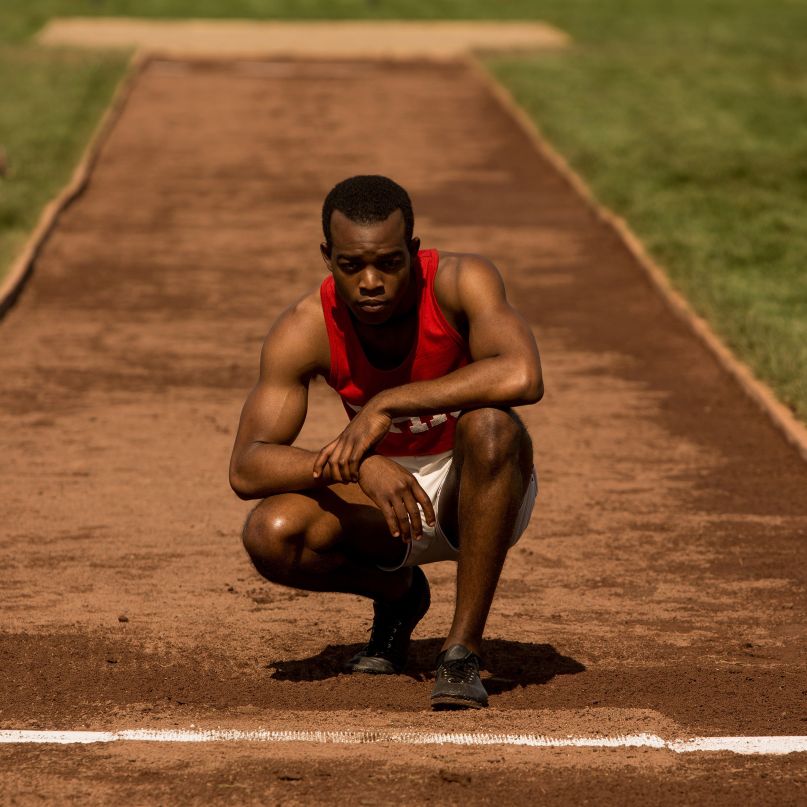 Jesse Owens deserves a terrific film. Just look at the story: unprecedented athleticism meets hellish history, the makings of a biographical epic. A film about Owens could have the hard-fought social kinetics of Straight Outta Compton, or the polemic fire of a Spike Lee film. Or hey, how about the heated athleticism of Ron Howard in Rush mode? Owens could even work the splendor and smiling glint of Spielberg. All would be fitting for the legend with four gold medals.

For now, however, we’ll accept a decent biopic. Race is a film best enjoyed for its mild ambitions and accomplishments, which easily beat out its missteps. Stephan James (Selma) is the famed runner Owens, as Race renders the intense pressure placed upon the man as he gained momentum building to his legendary runs at the 1936 Olympics. Owens is a man burdened mostly by his own glory.

We meet the runner in 1933, luxuriously lensed with the grit and honeydew framing of a twitchy Nike ad set in the Depression era. He runs and runs and is destined to go places. Verbally and dramatically, Owens is a soft-spoken figure. Lean and stoic. The drama of the man is under his toes. As Owens runs, his story is quickly juxtaposed with his entering his first term as a student athlete at Ohio State. Ah, the NCAA in simpler, less profiteering times. Owens represents the purity and earnestness of flying on one’s feet. It’s heartening.

At OSU, Owens meets up with his tough-talking, “runnin’s runnin’” coach Larry Snyder (Jason Sudeikis, trying to get at something true in an odd casting). Larry wants Owens to commit and to work, or at least that’s what his mouth keeps saying. Sudeikis plays Snyder with his eyes, driven equally by guilt and dollar signs. It’s an oddly antithetical performance, but Sudeikis tries to stand out from any number of stock coach personae with his gray ideologies and boozy, curt tone.

Owens just wants to run. And his running is the stuff of legend. While there may be bumps in selling the story of a guy who won constantly, Race wisely opts to frame his story within the tumult that Owens endured on his uphill sprint to triumph. The film deals in his academic ambitions, his love and mistakes, and most curiously his incidental status as a cypher for international, racial, and athletic stances. Owens has the weight of the world on him; people assign politics and identities to a man who’s simply happy to run. He just happens to be the best in the world, and at the forefront of millions of conflicts.

Race trips up when saddled with its oxymoronic “true story” clichés. James plays Owens a little too perfect in the end, even if he was indeed an amazing all-star; he’s less a man and more a story. Sudeikis’ Coach Snyder plays like an Archie Bunker type, and it works even if at times it veers suspiciously into white savior territory. Goebbels (Barnaby Metschurat) preens as much as he ever has on film, and Leni Riefenstahl (Carice Van Houten) is portrayed as an artist’s artist, with frizzy hair and pluck and an admiration for the total art of sport. But Stephen Hopkins’ film is less about the facts and nuances of the era, and more about the greatness of an all-time athlete. It’s all noise to Jesse that he must learn to mute in order to sustain the purity of his work.

Race looks snazzy on a shoestring budget (an alleged $5 million), and makes shrewd use of digital devices to recreate the period in clean, long take-driven postcard styles. Costuming and set design works less for authenticity and more for a general feel, as Nazis glower in a rigid white Berlin, and ‘30s football jocks brood in old wooden locker rooms. It’s all a roar surrounding Owens, and he aims to blow past all of it.

Sure, the film is a little too heavy on the rapid editing; ideas present themselves and sometimes seem unfinished or short-handed. But Race is best appreciated as an allegorical shake-up with the focus on Jesse’s big moments and competitions. And they feel quite big. Not even debatable filmmaking choices can stop Jesse in the end. His story, his wins, they elevate the whole work.

This may not come as a shock, but the third act is the strongest. Hopkins, a B-movie vet (Nightmare on Elm Street 5, Lost in Space, Predator 2), directs with inexpensive grace. When Owens enters the 1936 arena in Berlin, he’s presented in a continuously circling tracking shot for several minutes that emphasizes all the disbelief, anxiety, and raw narrative power of Owens’ experience. Race is the best kind of sports cinema in those moments, and holds fast to them. Owens is captured in scale exactly when it counts, and Race is winning in that way.