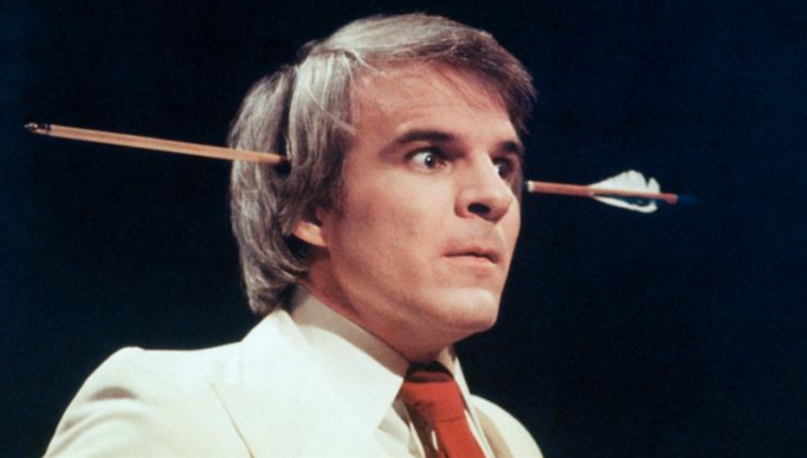 Throughout the 1960s and 70s, Steve Martin was the undisputed champion of stand-up comedy. But once his acting career took off, Martin retired from stand-up, and remained so for the next 35 years. “My act was conceptual. Once the concept was stated, and everybody understood it, it was done,” Martin explained of his decision to stop performing stand-up. “There was no way to live on in that persona. I had to take that fabulous luck of not being remembered as that, exclusively. You know, I didn’t announce that I was stopping. I just stopped.”

All that makes last night’s events at New York’s Beacon Theater especially historic. As Vulture reports, Martin was the surprise guest opening act for Jerry Seinfeld, and while his set only lasted 10 minutes and featured a bit of banjo playing, he also did a bit of stand-up comedy. For the first time in 35 years.

Vulture has a transcription of three of his jokes:

“Thank you. Jerry couldn’t make it tonight … Have a safe ride home! Actually, I’m here tonight because of that old showbiz saying: Never lose a bet to Jerry.”

“I’ll be honest with you, right off the top, because I’m a little upset with the Beacon Theatre. I was backstage and I used the restroom. And there was a sign that read, ‘Employees Must Wash hands. [Pause] “And I could not find [pause] one employee [pause] to wash my hands.”

“By the way, I apologize for the ticket prices. [Pause.] I know it seems expensive, because there is like one guy, two guys, and a couple of mics, but it’s not that way. There are like four sound people, and two lighting people, and [pause] drivers, and wardrobe people, and catering, and someone to walk Jerry’s Fitbit around. [Pause.] A celebrity look-alike, in case Steve doesn’t feel like going on. Steve says hi, by the way.”

During his own set, Seinfeld told the audience that sharing a stage with Martin was “really the thrill of my career.”