3 Doors Down – Us and the Night 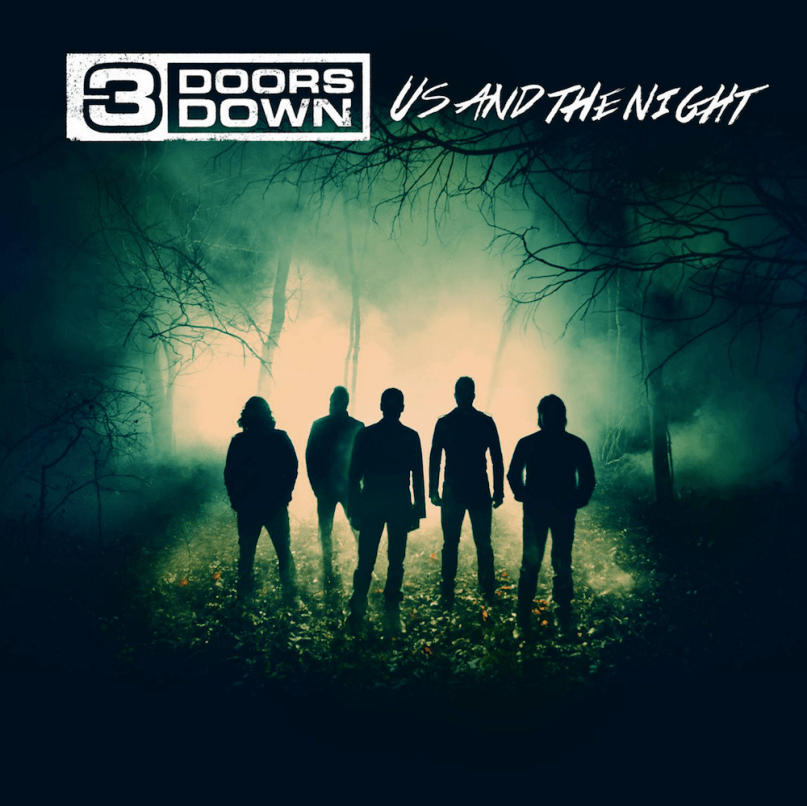 We all have favorite bands from our tween years — many of us before the word tween even existed — that we never kept up with. We all have even more bands that we have vaguely warm memories of from that era, bands that we remember enjoying on the radio or on TRL. 3 Doors Down falls more in the latter category; I remember hearing “Kryptonite” a few dozen times on Q101, buying The Better Life at Best Buy, spinning it obsessively, and then looking around hungrily for the next early ’00s post-grunge jam.

It took three years for the follow-up to that album, and by the time Away from the Sun dropped in 2002, I and many like me had already moved on from that type of music consumption. That said, the record still spawned a double-platinum single and two golds. But the gap between records surely cost the Mississippi outfit some anticipation and attention. Though I’d been a fan of their debut, I was surprised to learn they’d released four albums since — and the most recent even dropped in this decade. Listening to Us and the Night, though, its clear that not a lot has changed in the intervening years and subsequent albums.

Though, of course, knowing that necessitated reacquainting myself with who 3 Doors Down really were. Perhaps unsurprisingly, “Kryptonite” made all of the lasting impression — in a sense, “Kryptonite” was their kryptonite. There was more depth to the album than that, a blend of sensitive, yet brash ballads and passable grunge bluntness. If anything has changed since those days, though, its that they too have realized that the grunge era is over.

Rather than daub on Pearl Jam grandeur or Metallica jagged edges, Brad Arnold and co. let the pop hooks that sat at The Better Life‘s core ring cleanly, for better and worse. Opener “The Broken” rides on distorted guitar chug, but paired with glitzy pop synths and exuberant, fist-pumping group chants. The piano-driven “Inside of Me” would work as a pop star ballad, rising and falling in dramatic fashion. “Living in Your Hell” is basically a pop punk track, much more Smoking Popes or even Foo Fighters than the moody material you might expect from 3 Doors Down.

Us and the Night offers some bland, platitude-driven positivity, but only once shadowed by equally vague problems. There’s a thin line between building out themes for an album and getting stuck in a rut, and this one unfortunately sounds like it falls towards the latter. “Sometimes you gotta do your own thing, and I think that I should,” he offers vaguely on “Believe It”. The gentle, acoustic “Pieces of Me” looks into how “life got in the way,” but reassures that “tomorrow will be another day.” Heck, the album features a song called “Love is a Lie” that doesn’t contain much to latch onto. In trying to find songs that can work in the pop they’re tapped into, Arnold’s lyrics latch onto tired tropes and cliched rhymes, rather than offering any sort of narrative or emotional specificity. None of the songs are terrible, but none of them make much of an impression.

Maybe they haven’t changed that much. Maybe its just that enough time has passed that we don’t have to knee-jerk react to anything vaguely grunge-like, comparing anything with a distorted guitar to the genuine article. Lead single “In the Dark” will tell you everything you need to know about 3 Doors Down, then or now. “She likes to do it in the dark,” he slithers on the chorus, after delivering a verse straight out of a rhyming dictionary: name, same, night, light, scene, clean. It’s cute and going for sexy, a disconcerting combination. That said, that guitar riff will swagger its way into the back of your brain if you let it. 3 Doors Down never touted subtlety, and that’s definitely still the case.

Essential Tracks: “The Broken”, “Living in Your Hell”

Previous Story
Why SXSW Will Never Be the Same After Obama
Next Story
Beetlejuice 2 is a go, with Tim Burton, Michael Keaton, and Winona Ryder
Popular
More Stories
[fu-upload-form form_layout="media" title="Submit Your Photo"][input type="hidden" name="ugc" value="1"][/fu-upload-form]