Unique comic voice will have you saying "I do" 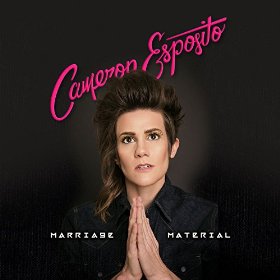 Marriage Material is Cameron Esposito’s third full-length release, following the comical high-tide of 2014’s Same Sex Symbol. Here, the Los Angeles-based comedian reconnects with her Chicago roots, filming the special at the bohemian Thalia Hall. And she couldn’t have picked a better spot for the celebration. “Technically, you’re at my bachelor party. And it’s just the kind of party I like: You paid to listen to me talk,” Esposito shares with a wickedly knowing smile.

Bobcat Goldthwait (Call Me Lucky, World’s Greatest Dad) directed the special for its visual format on Seeso, and while Esposito’s sharply tailored tuxedo makes her the center of attention on the screen, her radiant glee about her pending nuptials more than does the trick in the audio-only version. After-all, the 34-year-old Esposito officially came home to finally tie the knot with fellow comedian Rhea Butcher, whom you can tell Esposito absolutely adores, despite her future wife’s tendencies toward mysterious sleepwalking. “I sleep with a knife.”

Esposito admits that her exchange of marital vows is an achievement she never thought she’d get to experience while growing up in a Catholic high school, where sex ed held very little sway in the curriculum — beyond the occasional pro-life propaganda video, that is. Childhood is an utterly confusing time for everyone, but Esposito’s burden and insecurities about her sexuality during adolescence were especially tricky. At least when you’re you’re a queer little boy, she jokes, bullies will make a point of getting right up in your face to scream that you’re a gay little boy. But when you’re a queer little girl, you don’t always receive these hateful signposts pointing you along the way. Instead, Esposito laments, people just assume you really like overalls.

Marriage Material brims with these wry deprecations that speak to the larger struggle of becoming a proud member of the LGBT community. Esposito’s delivery demands empathy; her twisted optimism and curiosity give a warmth to her misadventures and feelings of inadequacy. This charm also disguises the sly nature of the commentary. Statements about the overwhelming majority of gay people actually being born to straight marriages seems like a funny aside at first, but the underlying humor resonates a deeper truth. “Straight people are gay people factories,” says Esposito, before urging anyone who questions that fact to look inwards. “The call is coming from inside the house!”

By repositioning an outsider’s perspective through a new, familiar lens, she brings fresh energy to topics that have historically been dismissed as hackneyed material by reflex. Esposito invigorates topics like gun control, the trouble with marijuana, and menstrual cycles. And while much of the pro-pot material goes up in smoke, it’s this last topic in particular that yields big returns and proves Esposito’s unique mastery of the stage.

The idea that a female comedian, gay or straight, should fear alienating most of the crowd by discussing their period seems silly after Esposito points out that women are 51% of the US population. “Like most Americans, I bleed once a month,” she notes. This sudden flip from a minority point of view to majority position is undeniable, hilarious, and something that’ll stick with you long after the standup special is over.

The sequence is met with thunderous joy, especially when she bemoans the nihilistic meaninglessness that menstruation thrusts into the life of a lesbian. “I have never had a pregnancy scare, so it’s never been a relief to get it.” Plus, she admits with an antagonistic grin, she “just love[s] to say the word period on stage” and watch the air get sucked out of the room. But then, even as she’s the one who installed the vacuum, she fills it up with gleeful energy and fresh perspectives. And if that doesn’t have you saying “I do,” I don’t know what will.