At 83 years old, the queen of country music gifts listeners another album of heartfelt zingers 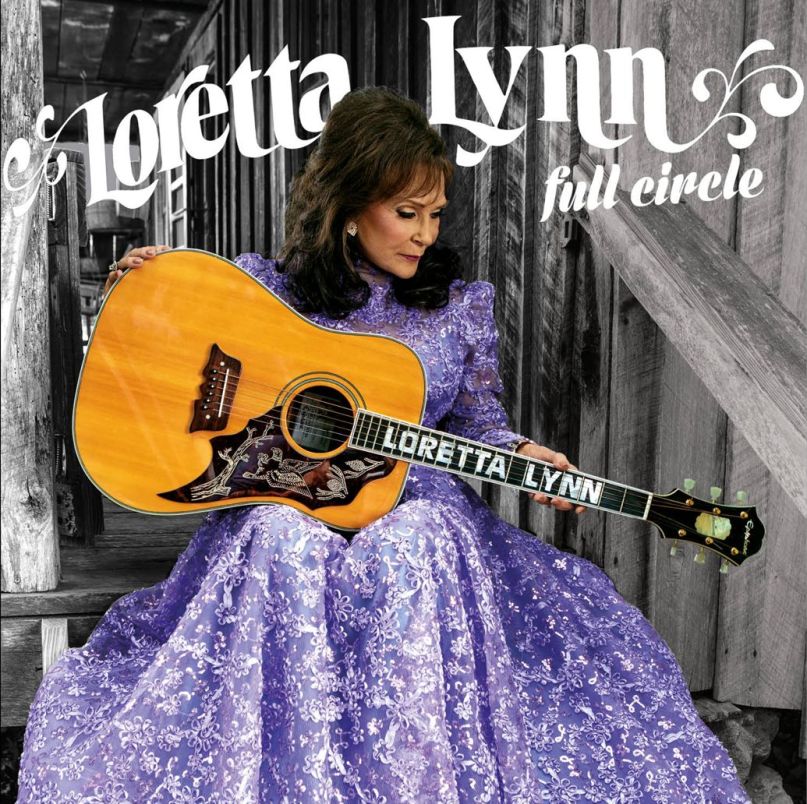 Three songs into Loretta Lynn’s first album in more than a decade, the feisty trailblazer plaintively asks, “Who’s gonna miss me when I’m gone?” To the world, the answer is a no-brainer. But the hard-to-miss ache in her voice each time she repeats the refrain reveals that, for all her blunt talk and hard truths, even the queen of country music and Presidential Medal of Freedom honoree doubts the certainty of her own immortality.

At 83 years old, Lynn is a treasure. It’s no coincidence PBS debuts the American Masters documentary Loretta Lynn: Still a Mountain Girl the same day Full Circle is released. Whether you’ve been with her since the beginning when she upended country’s status quo with a wink and a snarl (she was banned from the genre’s influential radio stations with the fierce pro-birth control anthem “The Pill” in 1976), first heard of ol’ Butcher Holler from Sissy Spacek’s Oscar-winning turn as Lynn in 1980’s Coal Miner’s Daughter, or allowed Jack White to facilitate the introduction on the pair’s 2004 garage rock/country crossover experiment Van Lear Rose, the singer with a penchant for sparkly, Disney princess ball gowns supersedes categorization. Considering the unexpected death of David Bowie in January, a new album and tour from Lynn feels like a gift.

In a major role reversal, Lynn enlisted the help of two people she used to run diaper duty on: daughter Patsy Lynn Russell and John Carter Cash, the son of that other famous country music family. Full Circle finds the trio delving deep into Lynn’s illustrious catalog, updating classics like “Fist City” and even revisiting the traditional ballads Lynn’s mother used to sing to her as a child, like “In the Pines”. Lynn reckons she recorded about 100 songs for the album, most just in one take. The bittersweet waltz “Whispering Sea” — the very first song the self-taught songstress wrote — kicks off Full Circle after a brief off-the-cuff introduction about the early days of her career when a naive Lynn didn’t even know how many songs went on an album, let alone how to write a hit.

The hits came anyway — a lucrative result of her tell-it-like-it-is demeanor. Unvarnished emotion and simple language rolling off her imperfect voice like poetry cemented Lynn’s legacy; Full Circle tries to preserve it for posterity, but with an addendum. Mortality squiggles blatantly through on two new songs, the aforementioned “Who’s Gonna Miss Me?” and album closer “Lay Me Down”, a deeply affecting duet with Willie Nelson. A solemn fiddle chaperones the two old guards of country music as they gently welcome the good night with acute lines like, “There are no tears where I am bound/ And I’ll be at peace when they lay me down.” The 1965 rabble-rouser “Everybody Wants To Go To Heaven” carries a biting tone absent from the swaying tent revival feel of the original. Its crawling ragtime-touched piano, swooping fiddle, and stinging pedal steel guitar slide into Owen Bradley pastiche.

Even the meanings of older songs seared into the human psyche by way of other artists are altered. In Doris Day’s hands, “Secret Love” blossoms. She performs it with a twinkle in her eye, while Lynn’s current retelling looks back wistfully without buckling under the weight of experience. “Always On My Mind” doesn’t share the same fate. Compared to versions made famous by Elvis and Nelson, Lynn’s rendition comes across as pleasant, but perfunctory.

Despite losing her husband and architect of her career, Oliver “Doolittle” Lynn, in 1996, Lynn can still write a zinger aimed at the other woman trying to steal her man. The best dig appears on the trotting “Everything It Takes”. Underpinned by an in-the-shadows Elvis Costello, Lynn delivers the line — “She’s got everything it takes/ To take everything you’ve got” — in a lackadaisical drawl that highlights the wordplay.

If Lynn’s vault contains the extensive mix of oldies and originals she claims, expect more releases in the future. Full Circle shows she’s sticking to her heritage and not taking the Johnny Cash way out. Besides, U2 covers would suit her like those high heels she chucked midway through a performance 55 years ago.

Essential Tracks: “Who’s Gonna Miss Me?”, “Everything It Takes”, and “Whispering Sea”