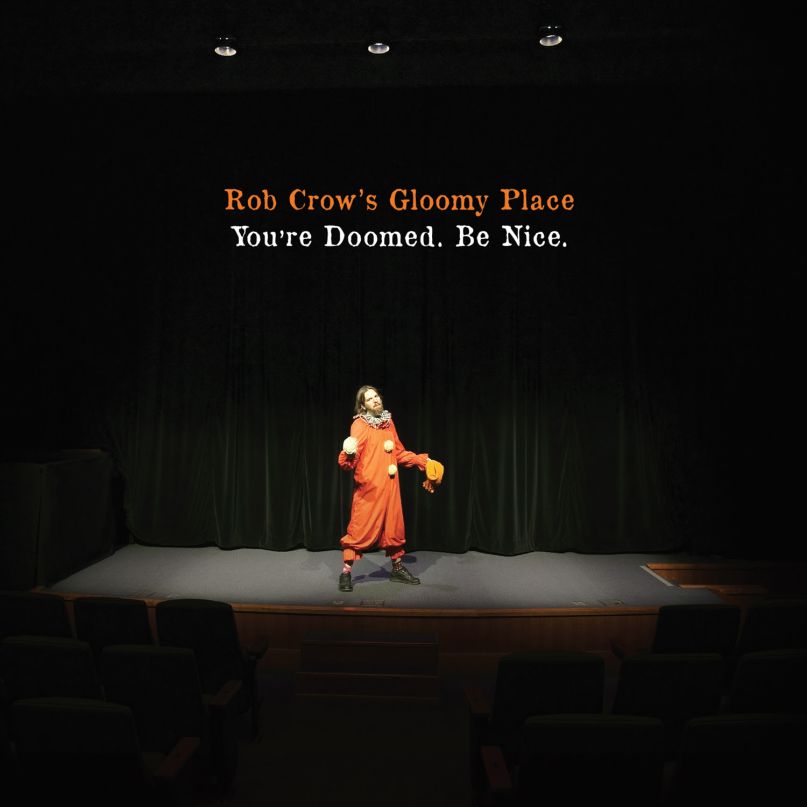 At first, the title of Rob Crow’s new album reads as dismal, an indicator that, despite the Pinback frontman’s sobriety, weight loss, and renewed outlook on life, perhaps he’s still overwhelmed by the same darkness — some of it self-imposed, some of it from outside factors — that caused him to almost quit music last year. I suppose it is somewhat dismal, not for Crow as an individual, whose transformation and re-calibrated priorities are to be admired, but for humanity as a whole. Even if you live to be 100, your planet will someday die. Humans may be wiped out a lot sooner than that, thanks to numbingly depressing forces like war, disease, and climate change. It probably won’t happen in your lifetime, but it could still happen. And if you’re reading this album review hundreds of years after I’m gone, with human civilization still intact, then hi! And congratulations. I kid, I kid.

Your belief in the afterlife and the potential of space colonization notwithstanding, even the most important figures in rock music could mean nothing in a thousand years time, their songs and all documentation of their existence destroyed along with everything else — the pyramids, polar ice caps, rainforests, us, the whole works. And yet, there’s something comforting in all of this. Once you realize how small you are in the grand scheme of things, once you realize that yes, we’re all possibly doomed in the long run, it becomes easy to be thankful, to be humble, to be nice. Rob Crow’s far from the first person to say this, but maybe the meaning of life is to appreciate life. The human lifespan is short and insignificant when considering the dwarfing scope of the universe. And that makes it special.

With that in mind, You’re Doomed. Be Nice. isn’t the wholly optimistic album somewhat hinted at by Crow’s metamorphosis, nor is it a backpedaling into the romantic/science-fiction despair of Pinback records like Summer In Abbadon and Autumn of the Seraphs. Rather, it’s optimism and joy by way of realism. Yes, there’s a clown on the cover, but it’s Crow’s deadpan face that’s peeking out of the ruffled collar. Yes, he’s in a comfy-looking auditorium, but all the seats are empty. That dark blend of defeat and humor extends to opener “Oh, the Sadmakers”, which begins with a bouncy guitar line that fits Crow’s description of a pleasant Saturday. Then, as depression begins to trickle into the fissures of his brain — slowly, unexpectedly (though does depression ever invade your psyche in any other way?) — thunderous chords worthy of Crow’s stoner metal project, Goblin Cock, take the song somewhere more aquatic and submerged. The weekend is now ruined by inexplicable feelings of inadequacy and boredom. It’s not a rallying cry, but it’s not a dirge either. Rather, its a recognition that happiness and mental illness/existential self-doubt aren’t mutually exclusive.

Even if the lyrics on the record were unabashedly sunny, there’s an angularity to the music that puts a tiny dam between the speakers and the reserve of endorphins in every listener’s head. That’s not to say Travis Nelson’s Escher staircase of a bass line on first single “Business Interruptus” isn’t hooky or that “Rest Your Soul” doesn’t have a power pop momentum perfect for soundtracking the races Crow has recently started running. It’s more that the math-lite musicality — the wiry guitars, constant key shifts, and helix formations of the synths should be familiar to any Pinback obsessive — creates an impenetrability that keeps true catharsis at bay for any casual fan.

It’s therefore best to view You’re Doomed. Be Nice. as a collection of anthemic slogans rather than anthemic songs. Upward-looking phrases tend to pop out from the complicated arithmetic: both a lyric (“You can’t scare me/ I was born scared”) and its respective song title (“Quit Being Dicks”) would make for a great tour shirt. The same could be said for “No Shadow Left Behind”, its message clarified when a quick swell of strings launches into Crow telling himself to “Burn your shadows down tonight” over the stop-start chorus. It’s the best moment on the album, and as fist-pumping as Crow gets while trying to break out of his gloomy place.

Elsewhere though, the journey towards health and happiness is more tempered and gradual. I don’t have a lyrics sheet for the album, so in the penultimate moments of closer “What We’ve Been Up to While You’ve Been Away”, it’s hard to tell whether Crow is singing “Validation is so likely” or “Validation is so unlikely” as the guitars and floor toms menacingly stalk the playful bells in the background. Maybe that ambiguity is intentional. Maybe those bright bells, not to mention all of us humans, are indeed doomed. Then again, maybe we’re not, and even if we are, we can all learn to appreciate life before we self-destruct or get destroyed. Either way, You’re Doomed. Be Nice. proposes there’s plenty of love, laughter, and happiness to be had along the way, even if these things aren’t always in plain sight.

Essential Tracks: “Oh, the Sadmakers”, “No Shadow Left Behind”, and “What We’ve Been Up To While You’re Away”