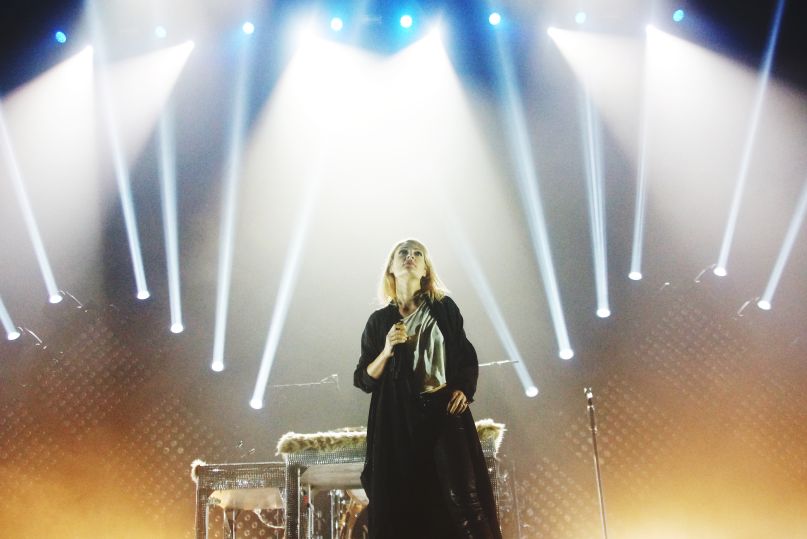 Over the course of six albums and 13 years of recording, Metric have revealed themselves as fearlessness creatives, challenging both themselves and their listeners. No one Metric album resembles any other, and that echoes truer than ever on their latest release, Pagans in Vegas. The album features a band that’s grown close in their time together, always testing their limits and going beyond what’s expected of them. This new album brought them to New York City on Friday night to headline at Hammerstein Ballroom.

I’ve been fortunate to have worked closely with the band before on numerous occasions, but my relationship with their music goes back further. Most of my college years were spent having their music playing in my headphones, at the bars I’d frequent with fellow art students, and in the dorm room I disliked (but not really). But their live shows are something different. They’re full-on celebrations, and they’ve never been bigger than they are now.

I met up with the band in the middle of the day, during their soundcheck. As I walked past the doors of the venue, I could hear the guitar shrill of “Black Sheep” reverberating along the halls, and the enthusiasm of Metric’s team at the light display going bonkers on stage. By now, their professionalism is embedded with their personalities. To talk with a member of Metric is to talk with someone who truly believes in what they’re doing and is fixated on what’s ahead. We caught up, the band recounting experiences of travel and trying out foods, until they finished their routine of visiting with friends and providing a select group of fans a VIP experience of chatting with the band prior to the show.

The eyes of the front row light up as Metric opens with “IOU”, and the remainder of the setlist showcases the strengths of Pagans in Vegas. Metric plays with a ferocity that you’d expect from a band starting out in a small room, proving that even with flashy lights and cavernous concert halls, they’re a rock band first and foremost. Singer Emily Haines spends the the show pacing from side-to-side, making sure her gaze fixates on fans’ eyes. The response was massive, and it was a brilliant exchange of love between the performer and her fans. It’s a reminder of why the band is loved and why their music made every dorm room or bar better.