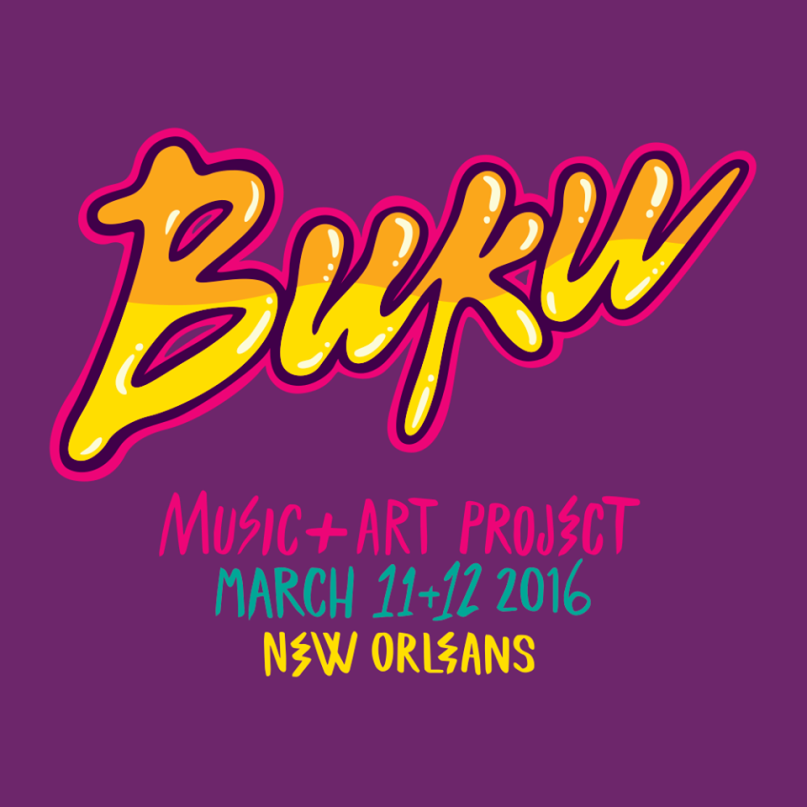 The inclement weather couldn’t dampen the crowd’s spirits as hundreds arrived on Friday afternoon in a puddle-strewn lot to enter the 2016 Buku Music + Arts Project. The lines to get through the entryway crawled thanks in part to the sheer volume of people, a growing number of the 30,000 set to attend the sold-out two-day festival. Chattering excitedly, the millennial generation’s younger members betrayed just how much this burgeoning event has come to mean to them. “It’s Buku! It’s Buku, baby!” a young twentysomething wearing a fake fur jacket over a bra and thong exclaimed to her friends, two girls in similar attire. Those in line sported comparable costumes, the kind of garb expressing individuality through a mélange of clothing accented with neon colors, sparkles and more.

Held in New Orleans, a place already saturated with festivals large and small, Buku — now in its fifth year — differentiates itself from that fray by serving up a space dedicated to MCs, DJs, electronic bands, and other rhythm-driven musical stylings. The festival could arguably be the region’s answer to the country’s other major EDM festivals, like Ultra Music Fest in Miami and Movement in Detroit, but it offers a decidedly stronger hip-hop component. Since its first year in 2012, when Wiz Khalifa, Diplo and Skrillex headlined the event, Buku has consistently drawn big names in rap and EDM. 2016 was no different with Future, Kid Cudi, Pretty Lights, Chvrches, Fetty Wap, and more packing the bill.

Buku soldiered forward on a weekend that threatened the kind of severe inclement weather that ended up closing schools. By 4pm on Friday, the day’s slow downpour had mostly subsided, leaving only lingering clouds and strong winds. Despite that gusty setting, the crowds were eager for Buku to begin. Located each year at Mardi Gras World along the Mississippi River, the festival’s industrial-meets-natural setting provides a memorable backdrop against which revelers can party. Barges pepper the background while crowds traverse a lengthy space offering three major stages — one outdoor and two indoor — and two additional smaller stages, the first exclusively for DJs and the second for musical showcases. An offshore ferry, the S.S. Buku, provided VIP guests with an additional stage.

The headliners were often the standouts.

Kid Cudi returned to play Buku for the second time since performing in 2013. Compared to the sensory-driven fare that comprised many other sets, he offered the massive crowd a thoughtful performance on Friday evening at the outdoor Power Plant stage. With an elaborate stage set-up that featured trees, nets, and old TVs playing Captain Planet, Transformers, and other classic cartoons, Kid Cudi played tunes ranging from “REVOFEV” to “Too Bad I Have to Destroy You Now”. For the rapper, it was less about making things big and more about making them meaningful. That kind of approach countered what in many ways felt like a two-day party in which pleasure operated as the motivating force.

On Saturday, Future held court at the same stage, his 6 p.m. performance quickly amassing a crowd that pushed back past the building housing Ball Room, the second indoor stage. Whether fans were listening from the front row or the very back, he reached everyone. One man practically alone onstage against a sea of thousands, and you could feel the vitality he brought to each track, whether it was “Blood on the Money” from his newest album or the hits off his mixtape with Drake.

Throughout the weekend, Pretty Lights became one of the more anticipated sets because Derek Vincent Smith brought a live band. The final Power Plant stage performance on Saturday night, Pretty Lights, needless to say, provided audiences with a powerful light show that punctuated the melodic trance-like rhythms bounding over the speakers.

The festival’s other highlights included Fetty Wap, who the audience clamored for before he walked onstage to raucous cheers, Chvrches, Rae Sremmurd, BØRNS, Baauer and Yellow Claw, each delighting fans and new listeners alike.

Oddly enough, for all the bass and boom involved with each performance, many felt energetically underwhelming. Sure, the crowds writhed and pulsated and at times bucked to the rhythms, but what took place onstage didn’t always meet them there. Miike Snow’s verve felt subdued during their Saturday evening set. Even beloved New Orleans rapper Mystikal gave what felt like a shallow performance for his hometown, jumping from track to track without getting into any one for too long. Crystal Castles was one of the few groups to offer fans a performance full of emotion and power, but the sound mix lost all nuance and became sheer noise.

New Orleans legend Big Freedia surprised passersby when she showed up on Saturday to hang out at her food tent, Big Freedia’s Soul Food (serving delicious Booty Poppin’ Potatoes), before hosting a showcase at the festival’s Front Yard stage. She blasted bounce music from the kitchen, which often caused twerk-offs from women walking between stages.

Besides the “music” part of the festival, art and artists alike make this a colorful event. A graffiti wall outside the Float Den stage showed off artists at work, while break dancers, acrobats, and stilt walkers blended with the crowd during shows.

Unlike other festivals that use the musical spirit to bring people together in an appreciative sense, Buku’s crowd instead seemed like a pleasure-seeking sort. One young man in his early 20s exited the Float Den on Saturday in the mid-afternoon. He shouted to his friend about how great the DJ’s set had been, then added, “It’s so much more fun when you’re f-cked up!”

As unique a setting as Buku offers attendees, it felt like a small one for 30,000 people, especially once the sun set each day and things became considerably more packed. Getting between the two indoor stages and to spaces like the Front Yard and Back Yard stages felt not only cramped, but downright claustrophobic at times. That feeling only amplified when those who had been partying all day stumbled, pushed, and generally made their way through the crowd, oblivious to those around them.

Despite the pervasive party-til-we-drop atmosphere that feels as though it takes precedence over the music, Buku offers up the 18-34 set (but, really, more like 18-25) quite the experience. It’s a two-day excuse to let loose to pounding rhythms and see some of the biggest names in hip-hop and electronica in a more intimate setting.

Above and Beyond // Photo by Amanda Wicks