The Same Sex Symbol grows up, but don't worry: Her side mullet isn't going anywhere 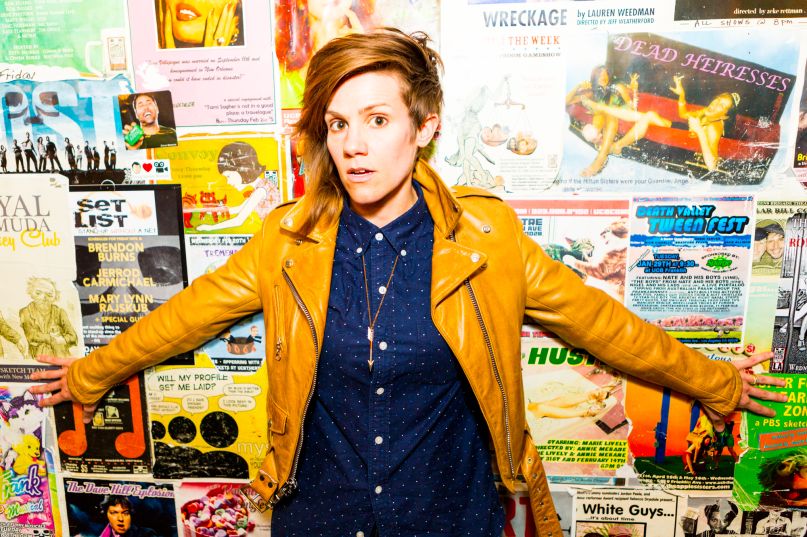 Stand-up comics get called lots of things, but “responsible” isn’t typically one of them. And it’s not a label you’d be quick to pin on Cameron Esposito, whose defining physical trait is a side mullet that swoops across her right shoulder like a bass clef (“As you can tell by my haircut, I am a Thundercat,” she joked on her 2014 comedy album, Same Sex Symbol). But catching up with Esposito just two months after her wedding to fellow comic Rhea Butcher, it’s hard not to sense that she’s the most adult person in the room. This holds true even when the room in question is a cramped backstage corridor at LA’s Upright Citizen’s Brigade Theatre, where Esposito and Butcher host a weekly podcast series called Put Your Hands Together.

The past couple of months have been a whirlwind for Esposito, who earned Consequence of Sound’s Comedian of the Year honor in 2014 and hasn’t stopped moving since. Not only has she sold her first television show to FX and launched her film career with a role in Garry Marshall’s upcoming Mother’s Day, but she might have also hosted the largest bachelor party the world has ever seen.

Two months ago, when Esposito traveled back to her hometown of Chicago to get married, she brought friend and director Bobcat Goldthwait along for the ride. “I didn’t want to get married without capturing it in some way,” she explains, “because there really aren’t that many comics who are gay or queer … and of those people, the number of comics who talk about it openly on stage is approaching zero.” So she enlisted Goldthwait to direct her first stand-up special, held at Chicago’s Thalia Hall just two days before her wedding. If that sounds crazy, imagine having to wait half your life for the government to tell you it’s okay to marry the person you love. You might want to celebrate in grand style, too.

Esposito’s 70-minute set in Marriage Material covers a lot of ground, but where Same Sex Symbol focused more on her past and present, her new material finds her wading further into the murky waters of the future. She still finds humor in her conservative Catholic childhood (“If you’re a gay girl, people will just come up to you and say, ‘Oh, she likes overalls.’”), but the funniest bits in Marriage Material come when she grapples with the realization that she’s finally an adult.

Backstage at UCB, when asked whether married life is really all that different, Esposito nods her head and returns to that strange word: responsibility. “I’ve had great relationships and bad relationships, and I just didn’t know how to look for normalcy because I lived this very weird stand-up comedy life,” she reflects. “I just kind of floated in and out of them and it wasn’t … I didn’t feel responsible to anybody.” She traces that tendency all the way back to her college years, when she first came out to her family and friends. “When I was coming out, there was such a feeling of letting people down,” she remembers, “and so then I just took no responsibility for anything for a long time. Turns out, when you’re taking no responsibility for anything, stand-up is a great career to get into.”

All sarcasm aside, stand-up did help Esposito work through some of the stickier points of her sexuality. “I went to Catholic school my whole life,” she says in a tone that almost suggests an apology, “and I just had no way of knowing that I was going to be okay when I came out.” So she felt out the contours of her newfound public identity by bringing her life to the stage and hoping that some of it — even just a little bit of it — made sense to her audience. Stand-up began as her way of “testing the world,” she reflects. At first, this simply meant testing to see how the world reacted to her as a person. As the years passed and her confidence grew, however, she started to test just how far the world could be pushed.

Watch Marriage Material or really any of Esposito’s stand-up comedy, and you might start to pick up on a little trick she does. Rather than present herself as an outsider and her lifestyle as alternative, she delights in blowing up heteronormative arguments from the inside out. “Straight marriage didn’t make me straight, and that’s because sexuality isn’t contagious,” she practically screams at one point during her special. “You’re thinking of zombieism!” The fact that most queer people were actually raised in straight families isn’t lost on her, and she uses it as the setup to a classic bait-and-switch. “If you wanted to cut down on the number of gay people being created,” she explains, “you would have to actually outlaw straight marriage. Which, by the way, I’m not in favor of. I’m an ally.”

Offstage, Esposito describes this tactic as “queering it up.” It’s her own private way of fighting back — of making straight people, even those who might consider themselves “allies,” feel like the outsider for a change. It’s often all too easy for people to slip away from the mainstream and into bubbles of alternative culture, but Esposito relishes the fight. “I think every woman makes a decision whether or not she’s going to stay and fight,” she reflects. “And I think I made that decision a really long time ago. I just think you stay and fight.”

This philosophy informs everything she does, from the venues she performs at (mostly midsize clubs) to the presidential candidate she supports (Hillary Clinton, emphatically) to the heteronormative traditions she chooses to embrace. It’s not that Esposito doesn’t recognize the cultural baggage that comes with marriage, an institution that hasn’t been historically kind to women. She just believes in the idea that people can reclaim spaces and experiences for their own purposes. “You know, my parents are still married after 40 years,” she says. “And I think there’s something about that that’s comforting. I just never thought I would have access to it.” Now that she does, she’s not backing down from anyone who tries to question her reasons or motives.

It makes sense, within this context, that Esposito would so vocally support a candidate like Clinton. She’s not the political radical who thinks everything needs to be blown up so we can start over; on the contrary, she’s the consummate insider in her small corner of the comedy world, someone who doesn’t feel she has to apologize for her own success. Besides, it’s not as if she’s taking the safest or easiest route by voicing her opinion. “A woman who’s supporting another woman is the most dangerous thing to be,” she sighs, a hint of incredulity creeping into her voice. “It’s the most dangerous thing to be on the Internet, and it’s also one of the most dangerous things to be in your career.”

She’s right, of course, as one peek into the abyss of Internet comment boards will confirm. But it’s this kind of senseless hatred — “stupid nonsense,” she calls it at various moments in her special — that motivates her to do more than just tell jokes. To Esposito, stand-up comedy isn’t all about vanity and self-congratulation, as it is to so many of the miserable folks who make the open-mic rounds every week. It’s about changing how other people think about and engage the world. “I believe that wholeheartedly, because stand-up is just talking about what’s important to you … and I think it does that in a way that doesn’t freak people out.”

Esposito acknowledges that all of this might sound a bit idealistic to someone who doesn’t eat, sleep, and breathe comedy as a rule. “The thing about stand-up is it’s so serious,” she says, shaking her head in a way that once again draws attention to the side mullet. “If you’re really dedicated to it, it’s the most serious profession in the world. Which is funny, because you are so far up your own ass that you can be serious about joking around.”

Esposito may be serious about her work, but she’s long past the point of being up her own ass. She’s got a podcast to run, a TV show to outline, and — oh yeah — a wife waiting at home. This last part might not be the most glamorous aspect of her persona, but it’s certainly the most sustaining. “Stand-up was my first anchor,” she says, “so it’s really amazing to find something else besides stand-up that I can count on. And that person is Rhea. That’s the something else.”

If all this sounds a bit grown-up for the comedy world, well, it is. And now, as always, Esposito isn’t apologizing.

Previous Story
Album Review: The Thermals – We Disappear
Next Story
New Radiohead album is a “work of art,” but is yet to be finished
Popular
More Stories
[fu-upload-form form_layout="media" title="Submit Your Photo"][input type="hidden" name="ugc" value="1"][/fu-upload-form]