CoSign: Leapling Make the Most of Leap Year 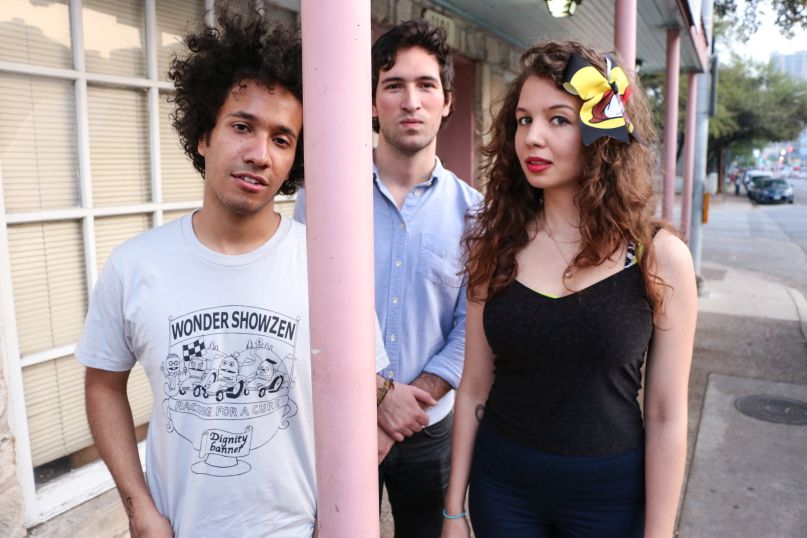 After seeking out a new identity from their earliest days, Brooklyn-based experimental pop act Leapling redefined themselves with a new tagline: Exploding in Sound. The Brooklyn-via-Boston record label picked up Leapling’s first full-length, Vacant Page, to show a new group of listeners their music. It was frontman Dan Arnes’ chance to keep going, this time with drummer Alejandro Salazar Dyer and bassist R.J. Gordon (later replaced by the talented, modest Cindy Lou Gooden) at his side.

Exploding in Sound is a proper tagline given it’s what brought the band’s current lineup together. While Arnes wrote material under the moniker for quite some time, the band didn’t actually take solid form until 2013. Then, in 2015, their current lineup formed. During a Zula show in April of that year, Salazar Dyer met Arnes and soon agreed to join Leapling on drums. That following September, Gooden took over on bass after running in the same music circles for quite some time — notably playing in Ava Luna as well as beside Sadie Dupuis (Speedy Ortiz) in two of her older bands, grunge act Quilty and short-lived Pavement cover band Babement — while still keeping up her other band, Very Fresh. Thus, the current formation of Leapling was born.

As a trio, Leapling have to work twice as hard as a quartet. “There’s a lot of space to fill,” explains Gooden. Given they’re laying down experimental pop, they constantly tread their own water, playing a zone where sweet, friendly hooks intersect with jarring guitar and soothing strings. “I feel like being a trio made me a better musician overnight, especially for me going from two guitars to one,” says Arnes. “I am the only treble element here that’s not a cymbal, and I need to fill that up or not fill that up.” It’s easy to hear in his guitar work. He balances it well, from Jeff Tweedy softness to Syd Barrett lash-outs, while always sounding like more than one guitarist. Now, the three are gearing up to drop their sophomore full-length, the loud, groovy Suspended Animation.

Vacant Page is the band’s cryptic album, lining up distant lyrics with diminished chords that never quite resolve. Suspended Animation acts as the confident brother, busting out major chords alongside lyrics that don’t bother obscuring weird lyrical flares with abstract phrasing. The album title, a reference to time passing and the general unawareness of so, accurately captures the vibe of each song. Things barrel ahead on cuts like “You Lemme Know” but strut nonchalantly on groove-centered single “Alabaster Snow” despite dramatic cymbal crashes. It wins you over with unpretentious experimentation and rhythmic guitar. It’s hard to figure out what makes the combo of lighthearted tone and angular guitar work, but it does — and it works well.

“Leapling was a band that was always on my radar,” recalls Salazar Dyer. “It took me a while to listen to [Vacant Page], but once I did, I loved it right away.” Once he joined, Arnes wasted no time cranking out new material. Joined by ex-bassist R.J. Gordon, the three threw themselves into the studio in August of 2015 to begin recording Suspended Animation. “Dan didn’t always send the demos to us,” Salazar Dyer laughs. “It was really cool, actually. We would hear it for the first time in rehearsal and then play it a bunch of times. We were just trying to remember what it was like, and I think that helped.”

Don’t go categorizing Arnes as an insensitive musician. Distancing himself — and, in the process, the whole trio — from the demos wasn’t an act of forgetfulness. It was a conscious decision to avoid demo-itis. “It’s happened to me before: you listen to the demo a lot and get attached,” he explains. “Those were done randomly — like I’d beatbox a bassline into my phone like an idiot on the train — and I consciously wanted the tracks to have more of a life. That was the move to deviate from it and change the arrangement in some cases, like shorten sections to see what works best.” In the process, he realized the artists he looks up to, from Deerhoof to Yo La Tengo, all record music in a room without constant rehearsal to embrace imperfections that come with freedom.

It’s good he did. They tracked it ’60s style: all live, slightly unscripted, recorded over the course of barely three days. As a result, Suspended Animation sounds loose and inviting, complete with panning sound effects. The album’s secret weapon is a well-employed string section. Violins drag out of tune on the title track, dominate the gorgeous outro of “I Decide When It Begins”, and add depth to closer “Time Keeps Tickin’”. After singing string parts in the demos (“I’m obsessed with Jim O’Rourke and John Brion and all these people who are like the best string arrangers alive,” Arnes gushes.), he roped Julian Fader and Carlos Hernandez on board to help bring the arrangements to life. “It’s very intimidating to come in as the dumb rock musician and say, ‘Hey, here’s the string sheet music, which you guys have studied for years and I totally haven’t,’” he laughs. Cue the image of Arnes frantically sitting in a coffee shop for six hours on end, moving tiny music notes in Sibelius to come up with sheet music. It’s comedic, but it paid off. Tonally, Vacant Page is a cryptic pool of slow tempos and lush vocals. Suspended Animation immediately goes for the upper cut, swinging wildly with catchy hooks and those immaculately-placed strings.

The band sprints forward at twice their speed when playing live, in part thanks to what Arnes calls “Cindyisms” — bass sections where Gooden exaggerates her parts and amps up the volume. “As a bassist, there are sections of each song that are really satisfying to play,” she says. “I just get excited when the rhythm section locks in in a way that feels really good, and there are moments in a lot of the songs.” By playing up her part, she helps drive the rhythm section to enunciate the band’s overall sound. “My favorite thing is to get real drastic with our transitions,” says Arnes, expanding on that idea. “We have the different kind of songs where we can play a really short, punky kind of song and switch to a mellow, melodic kind of song.” The glue between both parts is Salazar Dyer’s on-point jazz-like drumming, most of which was surprisingly self-taught.

With Suspended Animation, Leapling are gearing up to solidify themselves as the black sheep of Exploding in Sound — and they love wearing that coat. “We really are [a black sheep] based on Vacant Page, but they’re really supportive of it. I feel like it’s in our benefit to not sound like a Krill or Ovlov. When [Vacant Page] came out, people were like, ‘What the fuck? It’s on Exploding?’, which is cool. Now we get to do that again.”

Sure enough, Suspended Animation takes that sound even further with sweeping strings and hyper-melodic refrains, stuff fans would never expect to hear on that label. Maybe it’s time they change their mindset. Leapling found a new home in Exploding in Sound. Soon the rest of the music world will find a home inside of Leapling’s music.