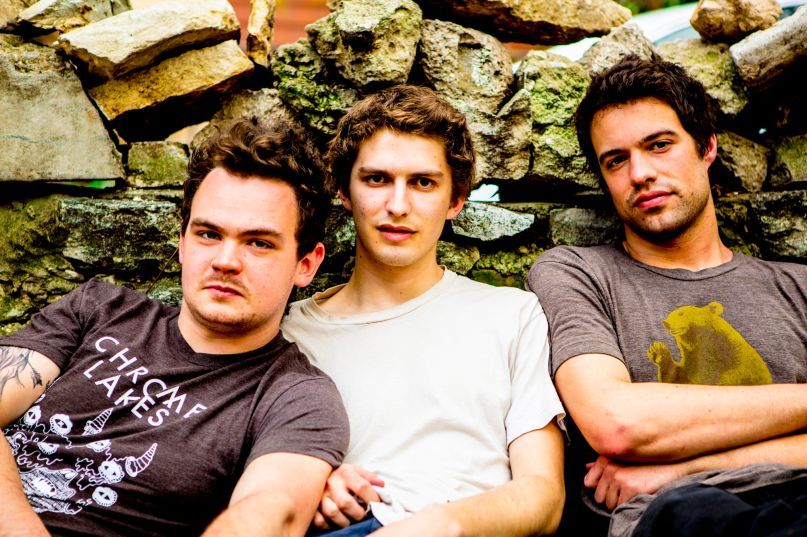 The free drink specials, food truckin’, all-sponsored-everything tornado that is South by Southwest in downtown Austin looks different just a couple miles away at the Funeral Sounds/Broken World showcase at Eden Co-op. It’s essentially a house party, complete with brown-baggers on the front lawn and a small record store in the driveway. The audience doesn’t have badges around their necks and look barely old enough to drive. It’s an unofficial event, with a full day of bands playing 20- and 30-minute sets, hardly enough time between performances for bands to do anything but plug in.

This is where Sioux Falls are performing their second of two shows in Austin. It’s the three-piece, Portland-based band’s first time at South by Southwest. Hell, it’s the first time they’ve ever been on a plane to perform. And though they aren’t going to be showcasing in front of industry figures, there is an un-infringed enthusiasm that the three share in spite of having to pay out-of-pocket just to be in Austin for a couple shows with friends.

Despite their Oregon residence and their South Dakota-referencing name, the band actually formed somewhere between the two, in Bozeman, Montana, a college town that bassist Fred Nixon describes as “big by Montana’s standards, but small by anyone else’s standards.” Both Nixon and frontman Isaac Eiger are fond of their hometown, openly missing the outdoor activities that come with growing up there and the families that they now rarely see. But the move to Portland was with a purpose, to pursue their musical endeavors, and that just wasn’t possible back home.

And of course, it’s never as easy as that. The move didn’t find the band instantly taking off, with them admitting the first few years sucked until they found their niche. But with the release of this year’s debut LP, Rot Forever, there has been a small but immediate impact. Critics have praised the band’s audible reference points (early Modest Mouse, Built to Spill, Sunny Day Real Estate), sounds that the trio admit isn’t accidental.

“I’m almost scared to emphasize the influence of Modest Mouse since the comparisons have been flying so hard,” Eiger admits, noting the similarities with the band extend beyond their sound — even to strange coincidences like the singers sharing first names and their Montana roots. “But we were fucking obsessed with the first three Modest Mouse records. Them, the Touchers, and the Pixies, there were periods of time where that was all I listened to.”

Still, Rot Forever is bigger than a collection of influences. The band carries more punk and emo into their sound, and as they play alongside a stream of DIY bands on this Wednesday evening, the three admit that they feel closely associated with the scene if not the sound. The humble contemporaries that surround the band at this party speak to what Sioux Falls expected from this album release and how the last couple months have already exceeded that.

“We thought pressing to vinyl was crazy and silly,” Eiger says. “We tried to convince Standard [Brickhouse Records] not to press so many copies, but they went ahead and did it anyway.”

“I was worried there was so much material that it would be hard for people to latch onto particular songs,” drummer Ben Scott adds. “But people on the Internet have picked out their favorites, and it seems pretty scattered throughout the album.”

And Scott is right. The album is an ambitious 16 tracks, with many stretching into seven- and eight-minute territory. When they perform shortly before 8 p.m., they manage to cram four songs into their 20-minute set. There’s feedback and hardly room to move around, but the group doesn’t hold back: Eiger wild-eyed, Nixon focused and tight, and Scott elevating the band’s possibilities in a way that explains why he has stuck around after they struggled to find a long-term drummer.

Seeing Eiger’s intensity, his unhinged passion contrasts his boyish geniality that is present in our earlier chat. “I can be extremely obsessive in various ways, and music is the focal point of those obsessive tendencies,” he says. “I feel shitty about myself if I go a week without creating something.”

This drive bodes well for a band that’s just put out one of the most surprising, consistent, and rewarding releases of this young year. And you didn’t even need a $900 badge to see them play.