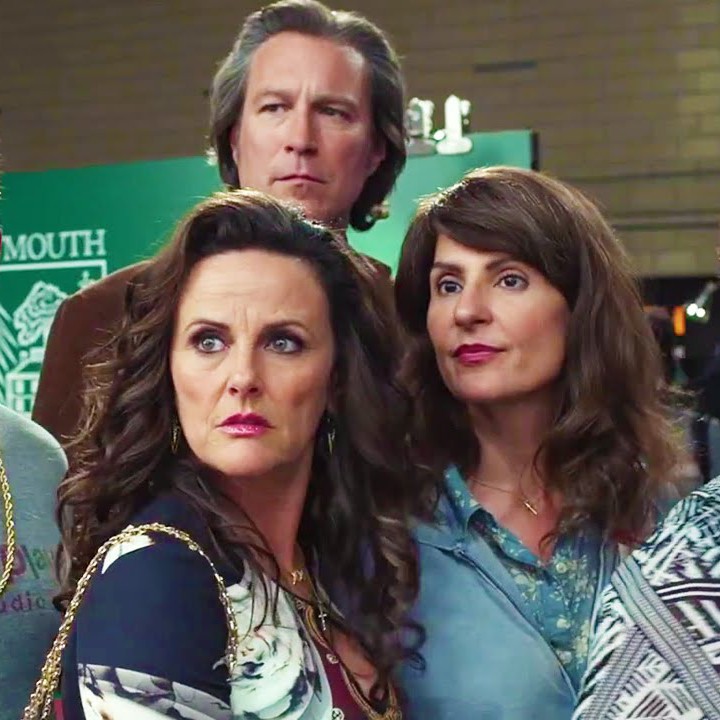 When it was released in 2002 to record grosses, My Big Fat Greek Wedding made its mark as one of the most successful independent films in history – a well-intentioned romp between a second-generation Greek immigrant (writer/star Nia Vardalos) and a smarmy but well-intentioned piece of white bread (John Corbett). The film itself was no great shakes, but it stood out for its earnest portrayal of insular, family-centric Greek culture and the kind of humor that makes your easily-impressed mother laugh – more sitcom than rom-com. Fourteen years later, the crew is back in business with a sequel that’s just as inconsequential and tepid as its predecessor.

After the events of the first film, My Big Fat Greek Wedding 2 sees Toula (Vardalos) and Ian (Corbett, still rocking that ‘90s mane) happily settled in Chicago, with their college-bound daughter Paris (Elena Kampouris) just one door down from Toula’s clingy family. Following the revelation that Toula’s parents (Michael Constantine and Lainie Kazan) were never officially married in Greece, the whole family set up a new big fat Greek wedding to make it official, though the stubborn parents find every reason to not go through with it. Meanwhile, Paris deals with the tension over possibly moving out of state for college, while Toula and Ian find themselves in a marital rut.

If this sounds like it came right out of an Everybody Loves Raymond episode, you’d be right on the money. Vardalos’ stock in trade with this series involves distilling her Greek heritage and family (the first film is semi-autobiographical) to the one-note comic stereotype of the busybody, close-knit immigrant family. Almost all of the original cast is back (even Joey Fatone!), continuing their schtick as loud, oversharing relatives who fuss at each other over nothing while rolling their ‘r’s and spraying Windex on everything. While this may have been charming in 2002, it feels like a limp retread today, and no number of family double-takes will make any of the family’s particular antics feel suitably outrageous.

There are some glimmers of innovation within Greek Wedding 2, and Vardalos should at least be applauded for trying to shake things up a bit within the safe confines of the family sitcom. Rather than making Toula and Ian the centerpiece again, Vardalos smartly places the focus on Toula’s parents, making for that rare movie that’s really about the relationship between an older couple in their twilight years. It’s no 45 Years, but at least Vardalos recognizes Gus and Maria as the first film’s breakout characters, giving stalwart character actors in Constantine and Kazan a nice showcase for their considerable talents.

While the parents prep for their wedding, the rest of the family struggle with their own problems in tepid fashion, and it’s a sad state of affairs when a rom-com can be celebrated for simply not bothering you. Paris’ rebellious-teen subplot isn’t too bad, since the film treats her as a responsible young woman with a good head on her shoulders and an understandable desire to spread her wings. Plus, Andrea Martin gets to steal her fair share of scenes as the blunt, bossy Aunt Voula, who can fix any problem with pursed lips and an inappropriate family anecdote. As for Vardalos and Corbett, their chemistry’s fallen off in the intervening years – maybe it was their disastrous turns in I Hate Valentine’s Day – but they wisely stay out of the way and let the broader supporting players take the reins.

Despite these mild shakeups, My Big Fat Greek Wedding 2 is about as unmemorable a movie as you’ll find in 2016. Everything about it, from Vardalos’ screenplay to the limp retreads of the first Greek Wedding’s better moments, stinks of an extended HBO special that somehow made its way to theaters. While there’s nothing there that will truly annoy, nothing about Kirk Jones’ bright, basic direction stands out, either. It’s hard to fault the film for that, but brownie points can’t be offered for aspiring to mediocrity. My Big Fat Greek Wedding 2 sits there like a potted plant in the center of a bundt cake: mildly amusing but mostly useless.