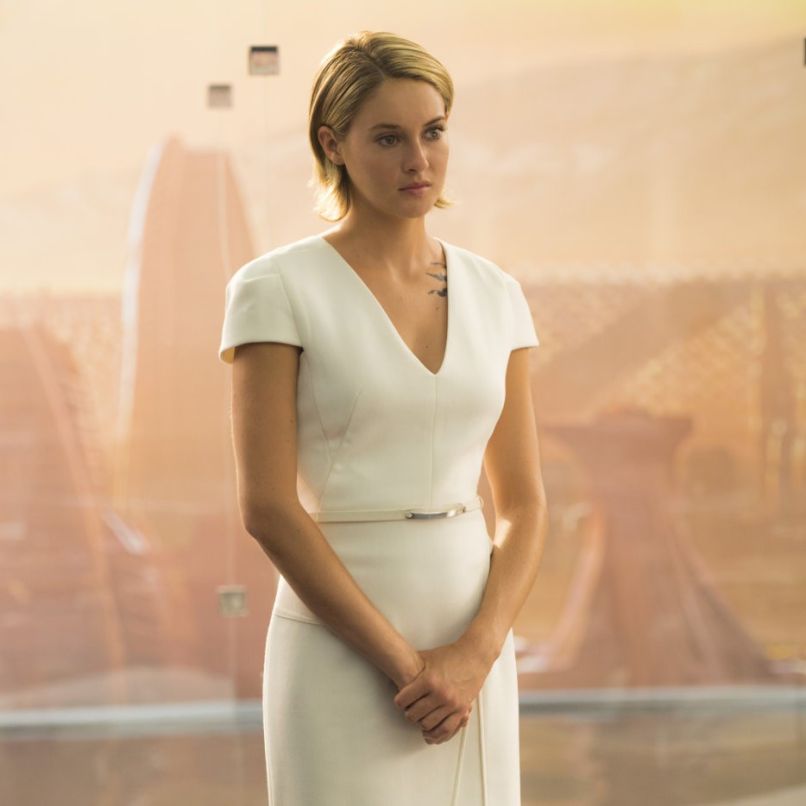 Maybe someday in the future, people will wonder why Veronica Roth’s books weren’t developed more clearly or cleanly as fanciful youth empowerment in the Saturday morning style. But for now, it’s the same over-budgeted sci-fi stupidity and tonal tedium in the old Divergent franchise.

Allegiant is round three of Summit’s actioners about dystopian youths in Chicago, and it is the series’ most redundant and cluttered entry. To be frank, the Divergent films are all exactly the same at this point: strong but human heroine takes on the oppressors with laser guns and the crowd rejoices. It’s not the worst formula for a series of novels, really. But Allegiant’s duplicated from its predecessors, distinguishable by its production design and propensity for vehicle/weapon effects. Here’s a sequel where screaming “why haven’t you learned anything from the first movies” at the screen is still rude, but not wrong to ask.

After defeating fascistic, white-coated cretins in their ivory towers, Tris Prior (Shailene Woodley), the famed “Divergent” of Chicago, must plan her next move to try to and help her world. To reiterate (and don’t worry, the film’s opening narration will help you out in case you forgot the last film already), Allegiant starts up right where Insurgent finished off: ugly freedom. It turns out Chicago’s been set up as a gated community-turned-science tub by even more dubious, controlling forces than the last movie’s. Now the implications might seem staggering, right? Life is nothing more than an Under Armour-sponsored Truman Show for these people.

Tris, in shock at her society’s lies, wants to leave, to meet her makers and seek peace with no clue as to how to achieve it. But she has an arsenal of weapons, and a plucky posse to back her. After all, she’s the “Divergent,” the whole-hearted, thinking, feeling figurehead that wants to get to the bottom of things. And then laser blast them.

Tris makes a daring escape (a digitally proficient scene, actually) and winds up at the Bureau of Genetic Welfare, formerly O’Hare International Airport, a mega-white spire that could best be described as a mix of Dr. Manhattan’s castle on Mars and an Apple store. “Welcome to the future,” a snooty gatekeeper says at one point, which is one of those bad sci-fi lines that’s awkward to say in a movie about the future accepting itself as the present, but whatever.

Tris is informed by the bureau’s head honcho, David (Jeff Daniels), that he’s been watching her his whole life, and is so proud to see his experiment succeed. She’s perfect. Actually, “pure” is the word David uses, and everybody else is apparently “damaged.” Eugenics and shiver-inducing compliments aside, Tris doesn’t blink. Eventually, Tris questions/kicks/blasts her way to the truth, such as David’s plans for a dangerously naïve and controlled utopia.

The now-trilogy’s first entry, Divergent, was enjoyable in spite of its hard-to-sell ideas. And last year’s Insurgent was a blast of running fury, about a young person pissed and ready to fight for what she believes is right. As a sequel Allegiant is Xeroxed, and as a teen flick it’s loud and lame.

To its credit, the film is visually gilded with richly colored buildings, landscapes, and gadgetry. It’s like watching Soylent Neon Orange and White, or Tris’ Run, as it were. Allegiant’s burnt, bleeding landscapes and bright, glistening aesthetics impress. It has nifty costumes, cool-looking vehicles, and really leaves one wondering why these films never got the action figures they needed. Insurgent helmer Robert Schwentke ups the CG dazzle here, but it doesn’t serve the plot. The last film was paced and plotted like a great paperback thriller, but Allegiant stumbles under its self-imposed portention in favor of lingering over effects. Long shots of ominous villain hideouts and a running fascination with future tech outweigh any perceived story. Tris gets to pilot a flying egg pod in a random getaway chase, but it’s just another chase in just another installment.

At this point, these films are too inanimate and too tired to make a mark; any grown-up can pass. Only staunch Divergent devotees will need to join in on this fading fandom. Allegiant will work for completists who buy it in one of those “Four Film Favorites” deals at Target in a few years, with lowered expectations. Maybe the series will already have been rebooted by then, as a Disney X-D cartoon, and Tris action combos featuring rocket blasters and hover cars will be available by then and the kids will love it. It sounds like a better diversion than the present series.