It’s Good to Be KING: A Conversation with the New Heirs to R&B’s Throne

After taking five years to release their debut, this LA-based trio isn't wasting any time 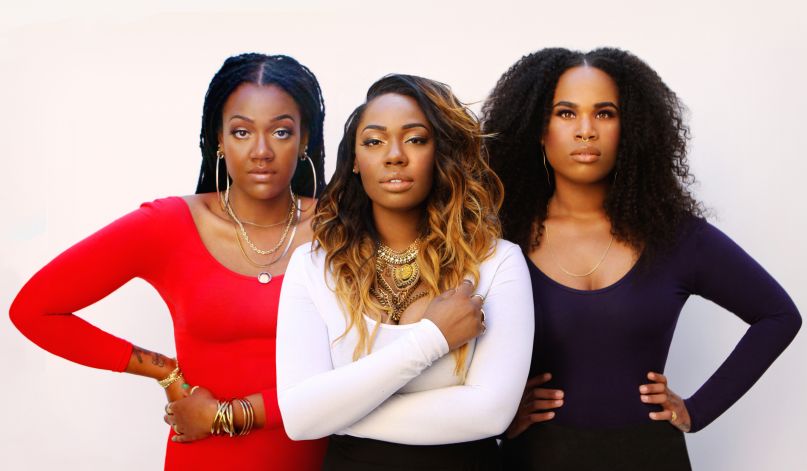 Momentum in pop culture, as in physics, depends on mass and velocity. Fans want more, bloggers want more, hypebeasts want more. We have become so accustomed to the constant stream of new music that even the traditional album release — whereby a date is announced and new music shows up on that date — is in danger of becoming obsolete. Last month alone, we witnessed several potential alternatives to the traditional model, from the hijinks surrounding Kanye West’s The Life of Pablo to the technological flub and eventual free release of Rihanna’s Anti.

Of course, artists as big as West and Rihanna tend to follow their own set of rules. Others have to find a way to stay in the public consciousness, and that usually means churning out albums on a regular basis. Only a select few artists can get away with letting more than a year pass between albums, and they tend to be household names. But try telling that to LA-based R&B trio KING. The group released their first full-length album, We Are KING, in early February. It’s the eagerly anticipated follow-up to The Story, a three-track EP that put them on the map … five whole years ago.

KING is made up of twins Paris and Amber Strother, both originally from Minnesota, and Compton native Anita Bias. Paris first met Bias when they were students at Berklee College of Music in Boston, but post-college life initially pulled the two in different directions.

“After I finished college in Boston, I moved out to the Bay Area,” Paris Strother explains to me over the phone. Before long, her interest in film scoring and writing music for television brought her to Los Angeles, and she reunited with Bias and her own sister. “I was kind of taken on a detour when I reconnected with Anita and Amber,” she reflects.

The reunited trio spent lots of time hanging out and making music for fun in 2009, but what started out as a hobby quickly became serious business. By 2011, the band had released The Story EP, which stood apart from some of the alternative R&B making waves that year. The synths and drum patterns were reminiscent of ‘80s soul, hinting at spiritual inspiration ranging from the Mary Jane Girls to Evelyn “Champagne” King (no relation).

Acclaim came swiftly, with the band gaining many fans and piquing the interest of other artists. One of their biggest early supporters was a young rapper named Kendrick Lamar, who sampled their song “Hey” in “Chapter Six” off his debut album, Section.80. Other enthusiastic backers included The Roots’ bandleader Questlove, Erykah Badu, and fellow Minnesota native Prince; The Purple One even invited KING to open one of his shows.

In the years following the release of The Story, KING collaborated with the likes of Bilal and Robert Glasper, performed a handful of live shows, and teased the arrival of a proper full-length album. Although this was enough to keep their dedicated followers intrigued, questions about the due date for their debut loomed large.

“We think it came out at the perfect time,” Strother reflects. “We knew that people wanted us to put it out [earlier], but we just focused on the creative elements and also making sure it came out the way we wanted it to.” This meant being in the right place in a personal sense, but also — and just as crucially — in a business sense.

If superstars like Kanye West and Rihanna have taught smaller artists anything, it’s that they no longer have to be constrained by record-label dictates that often pit commercial and creative interests against each other. The need to put art at the forefront lies at the core of KING’s ethos.

“In this day and age, what people recognize in the music is the authenticity and originality, not only in the music itself but in the approach,” Strother explains. “I think that’s part of what makes it sound the way it does — we take our time and energy and put it all into what we’re working on.”

We Are KING was released on February 5th, just a few days into Black History Month. With the surprise release of Beyoncé’s “Formation” video, her subsequent domination of the Super Bowl 50 halftime show, and Kendrick Lamar’s powerful Grammy performance, February 2016 was packed with huge moments for black artists in pop culture. KING’s debut album contributed to that perfect storm, and the importance of the moment was not lost on the trio.

“It’s really an honor to even think that we’re included when people take that pride in our culture and our output as people,” Strother says. “In the music, the overall theme is self-love and appreciation. I think that goes culture-wise and culture-wide. So it feels really cool to be included in that conversation.”

Picking up right where The Story left off, We Are KING features 12 seamless tracks of electro-soul or dream pop — two labels that the band is perfectly fine with, if only for the fact that genres help make music more relatable to listeners (they’re also cool with “LSD R&B,” for the record).

From opening track “The Right One”, the album floats on the strength of Bias and Amber’s vocals set to Paris’ ethereal arrangements. Love — of oneself and of others — is indeed a dominant theme from start to finish. “The Greatest”, arguably the album’s standout track and the beneficiary of an excellent 8-bit music video, is a literal ode to boxer Muhammad Ali.

It’s a song that calls the listener to be the best at something, to go forth “with confidence and an unwavering belief in yourself,” as Strother put its. And yet, “The Greatest” superficially recalls the trademark yearning of ‘80s and ‘90s R&B, leading many first-time listeners to conclude that the song is about romantic love, much to Strother’s amusement.

R&B fans might experience a similar kind of interpretive dissonance at various moments throughout We Are KING. The brain seems to recognize the songs instantly, but they’re actually all entirely new compositions. While the trio doesn’t try to hide their influences (they concede that the spoken interlude on “Oh, Please!” was inspired by the Babyface classic “Whip Appeal”), they create by letting the music speak to them.

“The thing about KING is that it’s still uniquely us,” says Strother. “We’re never exactly following or citing anything, [we just go] after a feeling, and it often reminds people of something they’ve heard.”

In their time away from the spotlight, the band’s confidence grew to the point where they felt they could handle nearly every aspect of recording on their own. Aside from assists by Kyle Bolden on guitar and session artists on the horns and strings, Paris handled production and instrumentation while her sister and Bias took care of songwriting and vocals. The choice of the name KING was no accident. It was the first name the group settled on unanimously and one that represents the complete control that they have over their art and their business decisions. They’ve even founded their own label, King Creative, to house all of their creative output.

Now that the album is out, KING is taking great delight in hearing their admirers sing along with them on their largest tour to date. The grueling schedule certainly takes its toll; when I caught up with the band during a short break in LA, Paris was battling a cold caused by cycling quickly through cities with disparate weather. All the same, they’re looking forward to a year packed with new projects.

The tour will make a few more stops in the US before the band heads out in late March to perform for fans in France, Germany, the UK, and Ireland. They also plan to put out more videos and expand the scope of King Creative. In the short term, the label will focus on their own creative pursuits, but in time they might bring other performers into the fold or dabble in other artistic fields. For now, they’re growing as business partners and sisters and relishing the positive feedback from fans new and old.

“It’s been such a great feeling to see that people really stuck with us,” Strother says. “Good music really speaks for itself.”