Newsom showed up unannounced at a live score with Jon Brion 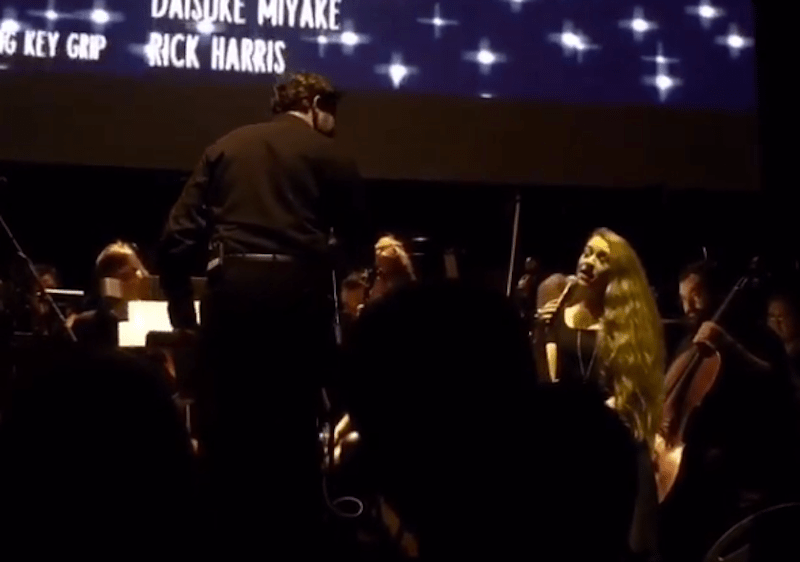 Los Angeles’ Ace Hotel hosted a live score screening of the memorable Paul Thomas Anderson film Punch-Drunk Love on Saturday evening. Composer Jon Brion was on hand to play keyboards with the Wordless Music Orchestra during the performance, but they were also joined by a surprise special guest. Joanna Newsom sat in to sing “He Needs Me” from the soundtrack during a romantic scene in Hawaii and the end credits.

The song originally was written by Harry Nilsson and sung by Shelly Duvall as Olive Oyl in the 1980 Popeye movie, a version which was repurposed here. Newsom has had a fruitful collaborative relationship with Anderson himself as of late; she starred in his Inherent Vice and he directed her videos for “Divers” and “Sapokanikan” off last year’s Divers.

Below, check out fan-shot footage of Newsom singing “He Needs Me” at the Punch-Drunk Love screening (via Pitchfork).

A small taste of Joanna Newsom singing "He Needs Me" during the credits of PUNCH-DRUNK LOVE. #punchdrunklove pic.twitter.com/4C9yT59JPC

(what i wish i'd been doing last night) Repost @noritakei ・・・ So much fun tonight seeing Paul Thomas Anderson's Punch Drunk Love for the first time in ages with its wonderful score by Jon Brion played/sung live by #jonbrion #wordlessorchestra #joannanewsom. I love this song, I sing it to my popeye all the time. #paulthomasanderson #harrynilsson #livescore

Brion will again join conductor Ryan McAdams and Wordless Music Orchestra for another live scoring of Punch-Drunk Love on March 19th at the Brooklyn Academy of Music. Wordless’ website indicates that in place of Newsom, Norah Jones will sit in to sing “He Needs Me” for the New York performance.