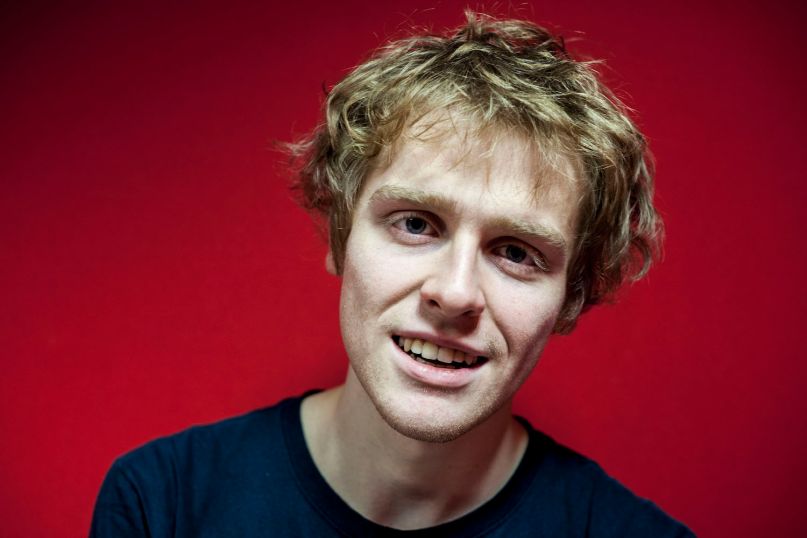 Last November, 20-year-old songwriter Kiran Leonard put out a song called “Pink Grapefruit”. The 16-minute track, something of a centerpiece of his forthcoming Grapefruit album, was truly a tour de force of a composition — one that journeyed high and low, flowed with hyper literate talk, and earned comparisons to Dave Longstreth’s writing style and early Dirty Projectors.

Today, the Manchester wunderkind has released its spiritual “sibling”, a similarly knotty and richly layered piece of music titled “Don’t Make Friends with Good People”. Here, for more than nine minutes, Leonard is at turns prolific and peculiar, prone to bursts of rambling feelings accompanied by ragged acoustic riffs. The mercurial nature of the whole thing is a signature of Leonard’s music, but also, in a way, reflects the evolution of the song itself.

In a statement to Consequence of Sound, Leonard breaks down the story behind “Don’t Make Friends with Good People”:

“I wrote the first draft of the lyrics for this song while watching the film Sedmikrásky [Chytilová, 1966]. That’s where the line ‘I was afraid that you weren’t of this century’ is derived from (though it deliberately makes references to the original meaning of the quote, really it is placed within an entirely different context here). The words slowly changed over the course of a few months to reflect changes in my relationship with some of the people (indirectly) referenced in the song. Not to be bait but I don’t want to go into any detail about the subject matter of the lyrics: I reserve the right to be allegorical and rambling and vague (and maybe even full of shit!).“You’re so vain you probably think this song is about you”. It’s a sibling to “Pink Fruit” and shares all of its shame and condemnation and bitterness, which nobody seemed to really pay attention to in the former, weirdly (NB: this song is as much about squid fucking as that one was). It’ll be more engaging for you and less embarrassing for me if you do the work !!”

And, like the deft wordsmith that he is, Leonard also provided a list of very specific influences:

fela; cj gocher; bob weston; “i don’t know if i can get over this” (r dawson, 2011); the stretch of road that connects greenfield with holmfirth; isobel who will not go you-know-where because of a drunken persistence; lizard lick towing; acrobatic tenement; d longstreth and a coffman’s guitar playing on rise above; zach hill’s drumming on the homeboy ep; bongo dave; arsenal fans; judee sill; hebden; roddy doyle; red bull te dá aaaaasas; harrop edge lane; on one’s own; shirking villainy & despondency

Stream the song below.

Grapefruit is due out on March 25th through Moshi Moshi; pre-order it here. In support, Leonard will embark on a UK tour later this week.