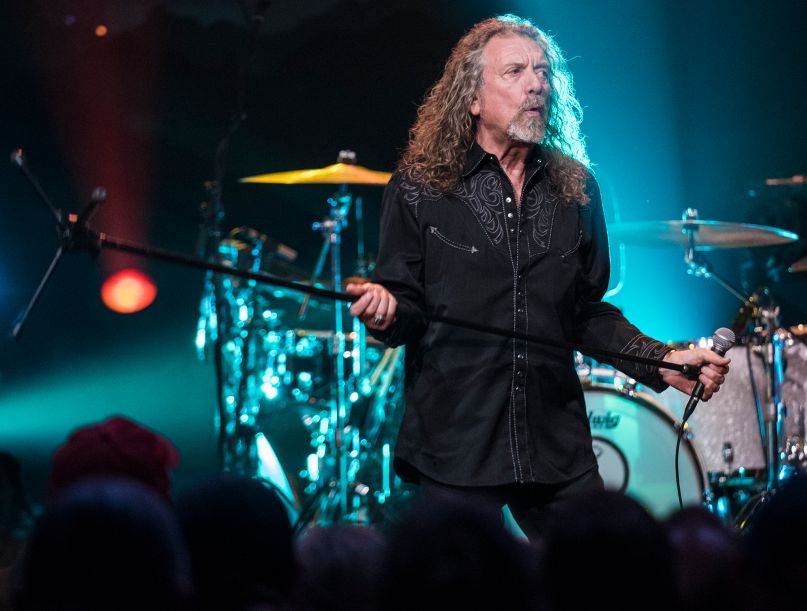 Last Wednesday (March 16th), for the grand finale of the 34th annual Austin Music Awards – the local equivalent of the Grammys held each year during SXSW – a few hundred lucky music fans got to witness a once-in-a-lifetime performance from Robert Plant. Yet it had nothing to do with Led Zeppelin, not even so much as a snippet.

Namely because this appearance, alongside top local players like Charlie Sexton, Emily Gimble, and Jimmie Vaughan, was all about honoring Paul Ray, arguably the voice of Austin music via his radio show Twine Time on KUT and KUTX from 1979 until mid-January when he passed away at age 73. Plant’s excitement was boyish throughout covers of three tunes ranging from the late ’50s to the early ’60s: The Coasters’ “Young Blood”, Jive Five B-side “When I Was Single”, and Clyde McPhatter’s “Let the Boogie Woogie Roll”.

“[These] songs helped me get through my time in Austin,” said Plant that night, referring to his stint as a resident from 2011-14. “That [show] was my anchor so often as I made my way through this town, at least sonically.”

Plant drove home that point once again Monday night by playing Ray’s “Twine Time” theme (originally by Alvin Cash & the Crawlers) as the intro music to his Austin City Limits TV taping, his third appearance in Austin inside a week (he played a proper show Sunday night at ACL Live) and first time on the long-running PBS series in 14 years. But his tip of the hat to Ray was subtle, and ultimately his extended-ATX-visit sendoff (and tour closer with backing band the Sensational Space Shifters) served as a way to honor the Texas capital for providing inspiration and a sense of safety during his stay.

That was achieved within the context of the band’s typical set list during the past nearly two years of touring behind 2014 full-length Lullaby and … the Ceaseless Roar: Several Zeppelin mainstays (“The Lemon Song”, Joan Baez’s “Babe, I’m Gonna Leave You”, and “old English folk song” “Rock and Roll”) framed lofty psych- and West African-infused Shape Shifters soundscapes like “Rainbow” (repeated in the encore for the taping because of an alleged “mistake”), “Little Maggie”, and the aptly more rockin’ “Turn It Up”.

“There are no walls in this musical world … everybody had a side trip here and there, me mostly here,” said Plant before launching into the latter track. “[Our album] is a reflection of all the things we traverse and move through. When I came to live here, I saw a different picture, a bunch of colors … this song is about that experience.”

The crux of that experience clearly stemmed from Plant’s relationship with Ray – he says as much in the last verse: “A touch of serendipity/ A little stroke of luck/ The radio inside this car/ Brings guidance from above.” But in a broader sense, his words served as affirmation of Austin’s capacity to foster creativity and soothe one’s musical soul.

Such a massive endorsement for this city is particularly important in an era where the reality is not the thriving scene that SXSW might suggest, but a constant cutthroat struggle: we lost several much-loved small music venues last year to unseemly rent-hikes, and at least 1,200 industry jobs disappeared. Plant’s level of optimism won’t save our city’s musical economy – it will take countless others subscribing to that ideal and working toward a symbiosis between private interests and musicians/industry professionals in need. But coming from one of history’s greatest frontmen and a certified living legend, the sentiment should give us hope.

This episode will air as part of Austin City Limits’ 42nd Season, which premieres in October on PBS.