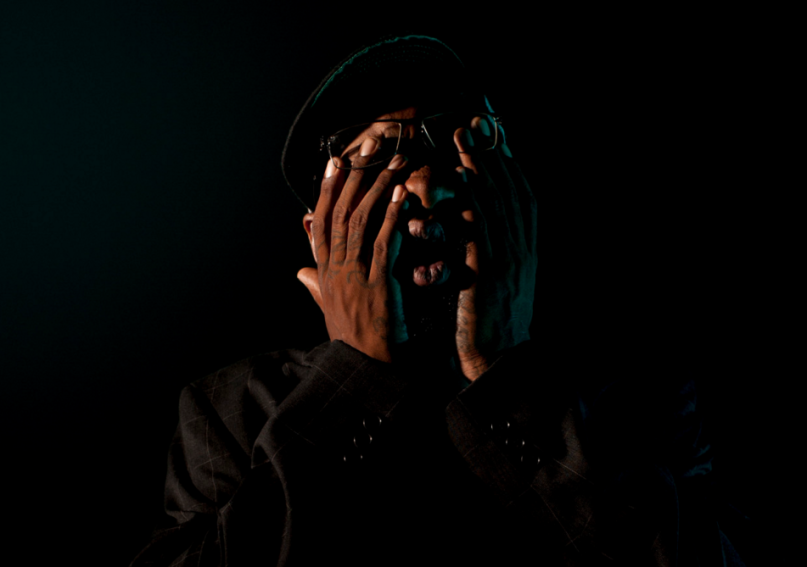 P.O.S. hasn’t exactly been silent over the last few years, having released All Hands as a member of Doomtree last year, and a collaborative single with Astronautalis as Four Fists the year before that. But since his last solo record in 2012, the Minneapolis rapper’s world has shifted drastically.

Following his well-documented kidney surgery in 2014, the rapper born Stefon Alexander found himself wrestling with the double-edged sword of fame, one born as much for his personal story as for his rhymes. Around him, the state of his community mirrored his personal one as it fell into disarray. Now, on the two year anniversary of his kidney transplant, he’s boiled all that bubbling stress into a stunning new track called “sleepdrone​/​superposition”.

The track is a fierce, gut-grabbing song stuffed with fiery contemplations. P.O.S. drops references to lost love, his health, Eric Garner, Drive Like Jehu, and quantum physics all with the same mic crushing intensity. It’s everything a consciously open lyricist might ever try to tackle, all delivered in one intense track that doesn’t diminish a single topic.

Take a listen to “sleepdrone​/​superposition” below.

P.O.S. posted the annotated lyrics for “sleepdrone​/​superposition” to Genius, as well as a lengthy note on Doomtree’s website discussing his last few years and the genesis of the track. He also promises more new music to come. For now, read that entire post below.

Welcome to MONDAYS with P.O.S!
I straight up jacked Lazerbeak for his web-log and switched up the days on you.

I don’t have any elegant way to say it, but right now marks the two year anniversary of my kidney transplant.  !!!  I’m deeply thankful for you. The people that have supported me, my music and this crew for years. You’ve heard us say it before, but we wouldn’t have anything without you all being here with us. I’m not gonna go into it too much here. But know..

Making We Don’t Even Live Here and then having to put the breaks on my career and the life I was used to, what’s been my life’s work, without ever getting the chance to really promote that record or hit the road and play those songs, was devastating. Being on the road, for a guy like me, is where you test and refine songs, as well as get the juice to keep it going. Keep wanting to write. Keep wanting to say anything to anyone. I get a lot of my personal validation from you. For better or for worse. And when I wasn’t able to tour ON TOP of having to stop thinking about my rad life, and start thinking about manually operating my own kidney with dialysis.. Brutal. Dumb.

Anyway, you guys helped a ton. In fact, Mary, my manager (the best btw), hand wrote every single comment you guys left on the donation site when I was raising transplant money into a book that she gave me when I was laid up. Reading that was, and still is, emotional for me. I have nothing but pure gratitude for any actual fan I have.

I’m not the best at talking to people in real life. I’m better, and just a little better, at songs. That whole time was deep and real. It’s been hard to really reconnect with the place my head was during that time.

Without getting too personal, my people really came through for me. All of them. Andi, my youngest son’s mom, held me down when I was possibly the worst version of myself I could be. Not letting myself fear my own death. Closed off. Fully in denial of what was in front of me. Not attempting to let anyone understand. My crew, both my Doomtree people and my Totally Gross people. Expelling whatever energy they could to show love and support even if me being sick scared them. It sucks to look at your own mortality, or your friends. And we are young. There’s so much cooler stuff to look at. My oldest kid, Jake, playing it cooler than I ever could. Saying just the right things at just the right time. And looking after his mom at the most important times. So much more I’m not gonna say.

It’s about all that I was just talking about, being black, beefs, loves, hurts, victories, pride and the future.

The guest rap verses are a dream sequence.

The choir is my mind opening.

I sang the chorus melody to myself for a week. Then I sang it to Eric Mayson and he put the words in the chorus. I rewrote the first 8 bars to fit it.

I made the beat at one of my oldest friend Grant’s house on a mountain in Southern California using a synthesizer called a Sleepdrone5.

Mary wrangled Kathleen Hanna after Mandy suggested it. I thought that could never happen! She read the lyrics before saying yes and told me she felt inspired. There’s another 30 minutes of her I couldn’t find a place for! She sings all the backup vocals that are not the hook.

I wrangled everyone else.

Joe wrangled the thing until it sounded right.

People who’s amazing verses didn’t end up on the song are Mike Eagle, Serengeti, Sophia Eris and Monty Boston. All of those people killed it, but getting this song to flow right was key. I expect to work with all of those people again. I also asked Aesop Rock for a verse but he was working on his outstanding new record y’all are about to get. He gets better every album IMvhO. One day that will happen too.

Listen to it. Tell me what you think.

My fucking son is on this track. I realized he was closer to an adult than a kid when I heard his verse cranked on the big speakers at the studio.