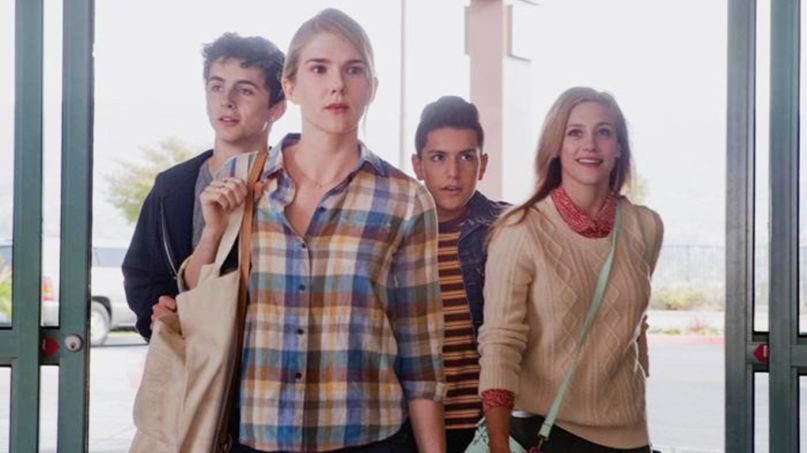 Miss Stevens, the debut feature from writer/director Julia Hart, is perhaps most notable for what it’s not, and that’s another ennui-soaked tale of a high school teacher’s taboo affair with a student. Sure, ennui is everywhere in this handsome, well-acted feature, but what’s weirdly revolutionary about Miss Stevens is how it doesn’t assume a teacher’s depression stems from a longing for the freedoms of youth. As played by Lily Rabe, the film’s namesake character is struggling with something much more complicated, namely the psychological toll that comes with caring for your students as people rather than, well, students. That she’s still figuring out how to be an adult isn’t helping her any, either.

So when she volunteers to take three students on a weekend trip to a high school drama competition, Rachel Stevens is forced to navigate the nebulous shift in dynamic that occurs when a teacher and her students meet in the real world. Margot (Lili Reinhart), for example, relies on Rachel for emotional support when she screws up her big audition. The boy-crazy Sam (Anthony Quintal) wants relationship advice. And then there’s Billy (Timothée Chalamet), a moody delinquent with a passion for drama and an interest in Rachel that’s, at best, spectacularly unhealthy.

Rachel is also only 29, just a little more than a decade removed from the students she’s paid to educate. As such, she sees no problem drinking in front of the kids, dancing at their social, or hooking up with a married teacher (Rob Huebel) she meets on the dance floor. Fear not: this isn’t Bad Teacher territory; Rachel’s behavior is absolutely normal for her age, but is it appropriate here? And how does it change her students’ perception of her, not to mention her impact as an educator?

Rabe’s performance here is nothing short of stunning. The sharp, lived-in tics and details of her character work are instantly endearing, an open window into her vulnerabilities and passions. What’s especially wonderful is watching her navigate the subtle shifts, the moments when she realizes a conversation with a student is veering into uncomfortable territory. Out-of-classroom conversations between teacher and student, after all, can be something of a minefield. Hart also culls strong supporting performances from the ever-charming Huebel–effectively dialed down from the absurd characters he often plays in comedies–as well as Chalamet, a talented young actor who can oscillate nimbly between charming and unhinged.

Hart’s direction, as well as her script, is sharp and elegant. Both maintain a brisk pace with short, impactful scenes heavy on humor and pathos. But she’s not afraid to let her camera linger during pivotal moments, resulting in a few scenes that hypnotize with their stillness, including a long, beautiful monologue Rachel spins about her mother. She’s also clearly well-versed in the academic festivals that serve as this film’s setting. Several details are pitch-perfect, from the chintzy lighting of the mixer to the precious, soft-spoken moderators who live and die on meaningless aphorisms (“Today we learn what’s you, what’s me, and what’s us,” says one, hilariously).

But despite the film’s impressive pedigree and refreshing thematic bent, Miss Stevens still plays at times as slight. The existential plight of the white, pretty, and privileged are the indie world’s bread and butter, and Hart’s film falls squarely into that subgenre. Its appeal is likely to be less than encompassing. That said, Hart’s perspective is something to be lauded; Rachel’s plight is never once hinged upon her relationships, romantic or otherwise, with men. Sex isn’t the cause of or the solution to any of her problems. For those reasons and others, Miss Stevens is a more mature film and blessed with a point of view that helps it transcend other stories of its ilk.