A rich, powerful revenge thriller that takes too much pleasure in its depravity 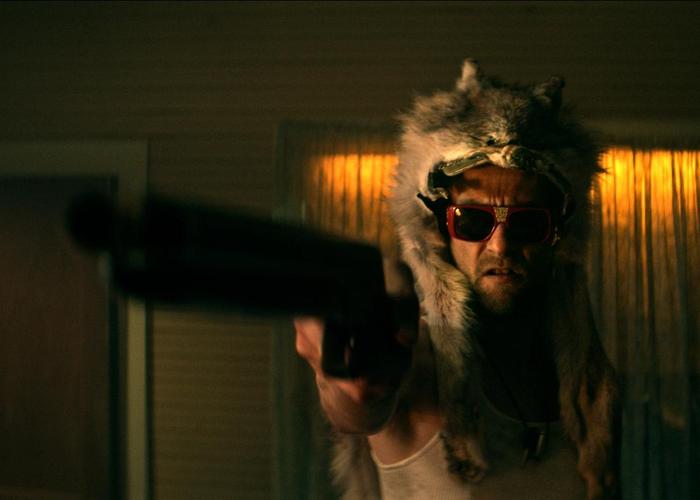 My Father, Die is loud. Not just sonically, though it certainly pummels the ears with a punishing soundtrack of hardcore and heavy metal, but also in the way it cranks the dial on its violence, depravity, and emotional catharsis. “In-your-face” is a stupid way to describe anything these days, but it’s hard to find another phrase that better sums up Sean Brosnan‘s Bayou-set revenge thriller. This thing is brutal.

Joe Anderson (Across the Universe, Hannibal) stars as Asher, a Southerner who loses both his speech and hearing during an attack that leaves his brother, Chester, dead. The perpetrator of that attack? Asher’s own father, Ivan (Gary Stretch), a tattooed monster of a man with tight, bulging muscles that course through his frame like cordwood pythons. Ivan is jailed for the assault, but released a decade later due to overcrowding. That’s when Asher sets out for revenge, wasting no time in pursuing the man that gave him life. But this is only the beginning of the story–one of My Father, Die‘s most impressive feats is how it evolves from a revenge thriller into an honest-to-god horror movie. By the film’s end, Ivan is more Michael Myers than man. If this doesn’t turn Stretch into the next Kane Hodder, that’s a damn shame.

Brosnan has style for days, sometimes to his detriment. My Father, Die oscillates wildly between queasy handheld camerawork and carefully orchestrated tableaux that could hang on the wall of a museum. Though striking, this stylistic inconsistency can feel overstimulating; it likely would’ve benefitted Brosnan to make a more stringent edit. That sentiment extends to the script, which occasionally culls depravity when it’s not warranted. A sequence with a kindly evangelical healer (Thomas Francis Murphy) veers into exploitation territory in ways that not only pervert the narrative, but spoil what could otherwise be an opportunity for empathy. There’s a giddiness to Brosnan’s approach to his film’s seedier elements that just doesn’t serve his narrative.

That’s not to say he can’t dial it back. There’s several lovely scenes in the second act that place Asher with Nana (Candace Smith), a churchgoing childhood friend who scrapes a living for her son (an adorable and expressive Jonathan Billions) through webcam modeling. Their scenes are also the best showcase for Anderson, who, lacking words, finds layers in his character through gesture and expression alone.

But this is still a horror movie, and it’s important to emphasize just how integral Stretch’s Ivan is to elevating this movie above the morass. The unkillable villain is a trope that’s sadly faded from the modern horror scene (as good as they were, the monsters in The Babadook and It Follows were defeated by hilariously lame means). Ivan is human through and through, but as sociopathic and imposing as any monster from the golden age of slashers. The final 30 minutes of My Father, Die do exactly what a great horror movie is supposed to: it makes you wonder just how in the fuck our heroes are going to escape from this.

It’s too bad, then, that the movie indulges in so much bad behavior. Brosnan (son of Pierce, by the way) is clearly a talented director, but there’s a mania to My Father, Die that detracts from its power, especially once intertitles appear during the closing credits that draw unwarranted and unnecessary comparisons to Irish playwright J.M. Synge’s The Playboy of the Western World, another story of attempted patricide. Brosnan would benefit from a streamlined approach, one that emphasizes his talent for subtle character work and breakneck chases over greasy depravity. More often than not, a good story is all you need.