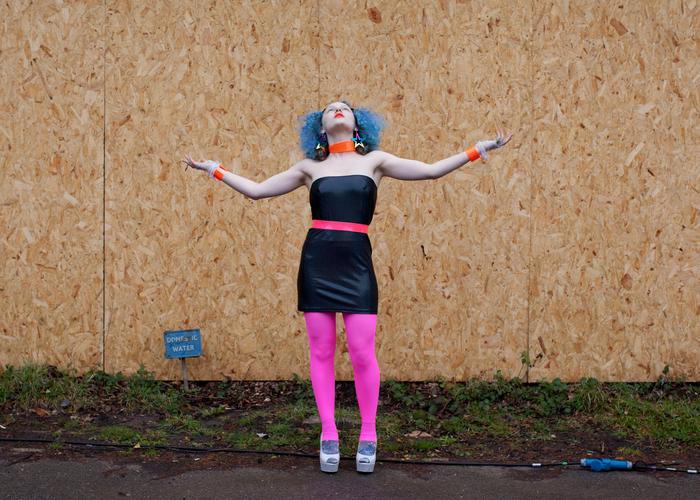 Early in the going, it would be easy to mistake Spaceship for a Gregg Araki movie. Scantily clad teens abound, as do the psychedelic colors, slow motion, and supernatural touchstones that dominated Araki cult flicks like Nowhere and Doom Generation. But Alex Taylor’s odd, dreamy film slowly comes into its own, due in large part to the director and writer’s tonal consistency and an evocative world that’s cunningly deceptive in the way it toes the tightrope strung between reality and fantasy.

At the film’s center is Lucidia (Alexa Davies), a rainbow-haired teen who fritters away her days with a motley crew of lithe, gorgeous teens plucked from a 2010-era American Apparel catalogue. They’re a wild bunch: sloppy-haired Luke (Lucian Charles Collier, a reincarnated Christian Slater) zips around on a sputtering motorbike and gets busy in crashed helicopters; brace-faced Tegan (Lara Peake) longs for the perfect high; and then then there’s Alice (a seductive Tallulah Rose Haddon), who drags her leather-clad boyfriend around on a leash and may or may not be a vampire. As they pound whiskey and pop pills, the gang and their Alice Cooper-aping pals wistfully pontificate on the unicorns, rainbows, and black holes that await them in the parallel universes for which they long.

For a long time, it’s unclear whether the mythologies they spin are pure artifice or an accepted part of the universe in which they live, which is as frustrating as it is purposeful. Too often, the film overindulges in its preciousness and rave-chic sense of rebellion: Those garish outfits and that overwrought teenage philosophy (seriously, every kid in this movie has a dream they need to tell us about) are only going to impress the teenage outcasts who will inevitably laud this as their formative film, after all.

But Taylor’s got larger ambitions; after Lucidia is swept away in a UFO’s light show — an event that feels less like a surprise than an inevitability in this world — her father, Gabriel (Antti Reini), attempts to track her down, finally offering us a clear glimpse into the world outside of the film’s central crew. His presence, aided by Reini’s restrained performance, serves as a stark contrast to the kaleidoscopic hedonism of Alice and Tegan, who see Lucidia’s disappearance as something to be embraced rather than reversed.

Taylor’s said that the film was heavily improvised off his original script and that the story changed a great deal during editing. This makes sense, as there are long stretches and subplots that feel like residue from the original script, moments that lack connective tissue and stick out like a sore thumb amongst what currently serves as the central narrative. And that story, the one at the heart of the film, ties together quite beautifully. What’s especially impressive is how Taylor subtly shifts perspective, first telling the story from the POV of his characters, then seamlessly stepping out to function as an omniscient overseer. It’s a neat trick, one that defies expectations and turns a film that could rest on artifice and sub-Araki pilfering into something altogether more resonant.