SXSW Film Review: Thank You Del: The Story of the Del Close Marathon 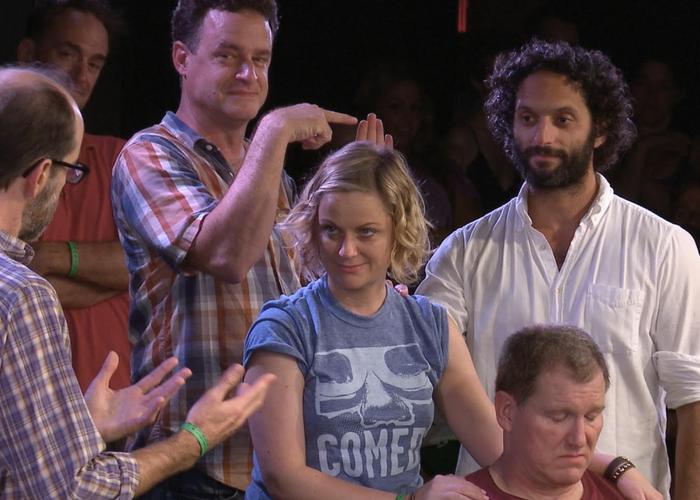 Any student of improvisational comedy should know the name Del Close. For the uninitiated, Del Close might just be the funniest person you’ve never heard of, despite the fact that his subversive genius helped spawn the careers of Tina Fey, Bill Murray, Harold Ramis, Chris Farley, John Belushi, and scores of renowned comedians who continue to champion Close’s groundbreaking work. Whether his name rings familiar or not, Thank You Del: The Story of the Del Close Marathon is an engrossing and surprisingly moving documentary that commands respect for the man who elevated improv into a dynamic new form – The Harold – thereby enhancing comedy worldwide.

Director Todd Bieber focuses in on Matt Besser and Matt Walsh – who serve as executive producers – along with fellow Upright Citizens Brigade (UCB) founders Amy Poehler and Ian Roberts to carry most of the film’s narrative as they prepare for and participate in the Del Close Marathon, an annual gathering that attracts improv teams from all corners of Earth. The event and history behind its formation help structure the film upon three tent poles: archival footage of Close’s philosophies and wisdom, candid interviews with former students and followers who have harnessed these lessons toward great success, and the journey of a young troupe from middle America taking their first steps onstage.

Traveling back and forth between these threads provides a greater sense of context for Close’s life and impact. The fact that Bieber’s arrangement derives real meaning from this anecdotal collage is also a testament to the director’s vision. It would have been an easier compromise to run clips from the treasure trove of historical footage disinterred over Bieber’s three years of work on the film. But that end result might have ended up too heady and esoteric without the inclusion of veteran comedians thriving at a high level, along with neophytes stumbling over themselves as they struggle to master Close’s “Yes, and” philosophy.

Interview: The Making of Thank You Del: The Story of the Del Close Marathon

This hilarious theatrical footage – which includes the likes of recent Oscar winner Adam McKay, Horatio Sanz, Zach Woods, Jason Mantzoukas, Louis C.K., and the indomitable Poehler – adds lot of laughs to the film. But it also highlights the difficulty in translating live comedy to the screen. Too often the film’s focus cuts away just as a comedic scene is starting to establish itself. These premature edits offer diminutive samples in place of a fuller meal. This speaks, in part, to the limits of the cinematic medium, which abbreviates the luster of an in-person performance in intimate settings. But it also leaves an aura of a work in progress that begs for meatier suggestions from the audience.

Thank You Del’s most captivating moments highlight the man’s glowing brilliance in contrast to the inward darkness that also pulsed beneath the surface. Many sequences flesh out this dichotomy, such as Close creating the landmark Second City improv school in Chicago, only to be fired for substance abuse and mental imbalance. His strident interactions with peers and students alike posit him as a harsh perfectionist unafraid to cut down those who displease him or stray from his grander vision. But like a championship coach or an unwavering professor, there’s a method to his madness, even if it does end up isolating him from colleagues, broader financial success, and much of humanity.

This grouchy impatience and wicked intelligence softens as the documentary arrives at the last moments of Close’s uncommon life in 1999. Incredibly, a farsighted cameraman recorded Close’s final epiphanies during Bill Murray’s farewell Del party within the dying visionary’s hospital suite. Close’s parting words to those around him – especially his revelatory goodbye to protege Besser, urging him to carry on the work – induced bittersweet tears throughout the theater. He was tired of being the funniest guy in the room. And his name was Del Close.