The Timeless Transgression of The Birdcage

Celebrating the 20th anniversary of Nathan Lane piercing the toast 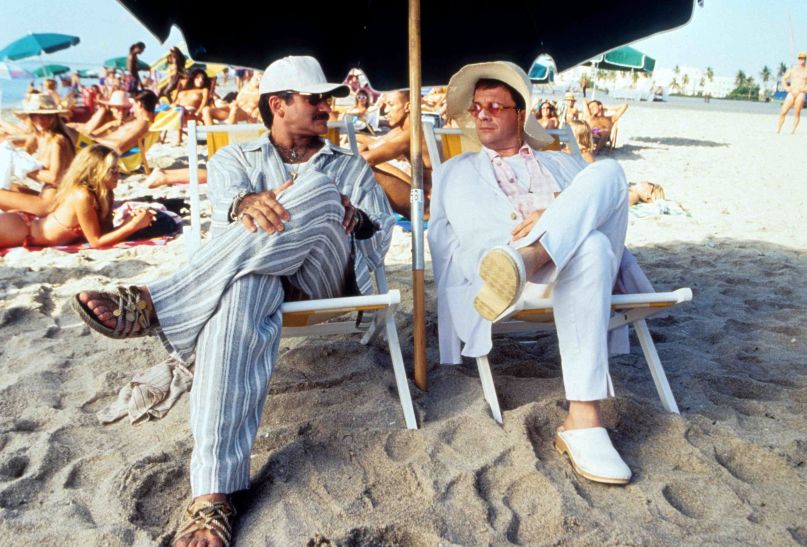 It’s been 20 years since the release of The Birdcage, the soulful Mike Nichols-helmed comedy that asked Robin Williams to play the (gay) straight man, put Gene Hackman in drag, and made Nathan Lane famous beyond Broadway and “Hakuna Matata.” A lot has changed, thank God — that palimony agreement could now just be a plain ol’ marriage — and a lot remains the same, a fact that makes viewing The Birdcage during an election cycle an odd experience. On the one hand, yep, politicians can be giant hypocrites and frauds who put public perception far ahead of decency. On the other hand, wouldn’t it be nice to go back to the days where ultra-conservative politicians were concerned with seeming milquetoast enough, rather than selling steaks, building walls, and implying penis size? But politics are just a means to an end in The Birdcage, and for all the progress we’ve made as a society, there’s a reason the film doesn’t feel dated.

For the uninitiated, The Birdcage was adapted from Jean Poiret’s 1973 French farce La Cage aux Folles, a play that was also adapted into a Tony-winning musical of the same name (and if you’re into that sort of thing, the cast recording is totally worth a listen). All three follow a similar plot, though Nichols’ film moves the action from France to Florida, naturally. Armand Goldman (Williams) owns a drag club, in which his partner, Albert (Lane), is the star, performing under the appropriately fabulous name Starina. When their son, Val (Dan Futterman), returns home to tell them he’s getting married, their shock gives way to celebration, but with the announcement that his fiancé, Barbara (Calista Flockhart), and her parents (Hackman and Dianne Wiest) are coming for dinner, things get mighty complicated.

That dinner’s the centerpiece of the movie and a tour de force example of classic farce — a tour de farce, if you will. (Sorry, couldn’t resist.) But well before we get to the slipping wigs, two mothers, sexually explicit dishware, and Agador (Hank Azaria) and his trouble with footwear, we get Nathan Lane piercing the toast. Understandably hurt by the decision that he shouldn’t be present for the dinner — Barbara’s father is a conservative Senator, and she’s lied to both her parents about what the not-Jewish, definitely straight “Colemans” do for a living — Albert storms out, Armand follows, and they set about finding a way that Albert can be present at the dinner. Not as anyone important, mind you. Just as an uncle. A straight uncle.

The scene’s worth revisiting for Williams and Lane alone, as they take such obvious pleasure in both the material and each other. But beyond its undeniable humor — seriously, just try to keep a straight face as Nathan Lane does his John Wayne walk — the scene matters because it’s grounded in our deeply entrenched ideas about gender and sexuality. The goal is to make Albert acceptable by helping him to conform to the standards society considers masculine, to get his pinky down and his voice low and his posture appropriately dudely. Men don’t drink like that, and they don’t spread mustard like that. “Men smear,” Armand demonstrates, an action so against Albert’s very nature that he manages to break his toast in half in the attempt. “Oh god,” he shrieks. “I pierced the toast!”

It’s clear from the start that this is a losing battle, but what a joy to watch Lane and Williams put up the fight. Watch the satisfaction Albert feels when he flings that toast over his shoulder, since real men just get more toast, or the determined look on his face as he firmly plunks that glass back on the table, both pinkies locked in place. Watch that great Williams deadpan after Albert walks, as directed, like the manliest of men (“I never realized John Wayne walked like that.”) And when Albert finally gets his wrist straightened and his handshake tightened and his walk un-swished, look at the beautiful confusion on both their faces as they try to talk about football:

Al, you old son-of-a-bitch! How you doin’? How do you feel about that call today? I mean, the Dolphins! Fourth-and-three play on their 30-yard line with only 43 seconds to go!

How do you think I feel? Betrayed, bewildered… wrong response?

Actually, I’m not sure.

This is an idea with which we, as a society, still struggle. It doesn’t simply go in one direction, either: actors of all sexual orientations often play effete as a punchline, making the fact that a character exists outside what we consider “normal” the joke, rather than actually making a real joke (ex: every time a straight man approaches a stranger, that stranger responds with some sassy bit of innuendo, and the straight man is weirded out. Look for examples of this in literally hundreds of mainstream comedies.) And as awareness and visibility around transgender men and women increases, we confront this issue in a new way: a great deal of emphasis is placed on “passing,” with trans people often praised for looking and behaving appropriately female or male — a compliment that ignores that both genes and money play a huge role in such an appearance, two things not available to many.

But regardless of orientation or the sex assigned at birth, nearly everyone comes up against these ideas. Girls play with dolls, cooking sets, and pink things. Boys play with trucks and action figures. Women and men who identify as straight but don’t neatly conform to our ideas about gender often find themselves subject to whispers about their real one. It’s an issue that’s gradually getting more attention, as with the #LikeAGirl ad campaign, the repeated cries of “Where’s Rey?”, and the work of genderqueer artists like Mathu Andersen. But assumptions are hard things to battle, as hard to battle as your very nature — something The Birdcage illustrates with intelligence, grace, and a lot of humor.

The scene’s biggest punchline doesn’t come until much later. When all’s said and done, it’s not Armand that seems “normal” in the Senator’s eyes, but Albert, embracing himself and his nature. He’s just doing it in drag. Armand does all the things he attempts to get Albert to do. He’s brisk, formal, and decidedly un-swishy. He’s stoic to the point of emotional vacancy. He absolutely would not get hysterical if he pierced the toast. But straight or not, it’s clear that something is just not right about Armand. The Senator looks right past Albert’s adam’s apple, but the lie obvious in Armand’s very presence does not escape his gaze. It’s authenticity that resonates, so much so that even when the wig comes off, Senator Keeley can’t see Albert as a man until his wife spells it out. Before then, it’s something else that shocks him: “You can’t be Jewish!”