Scott Hutchison and co. know what doesn't kill you makes you stronger 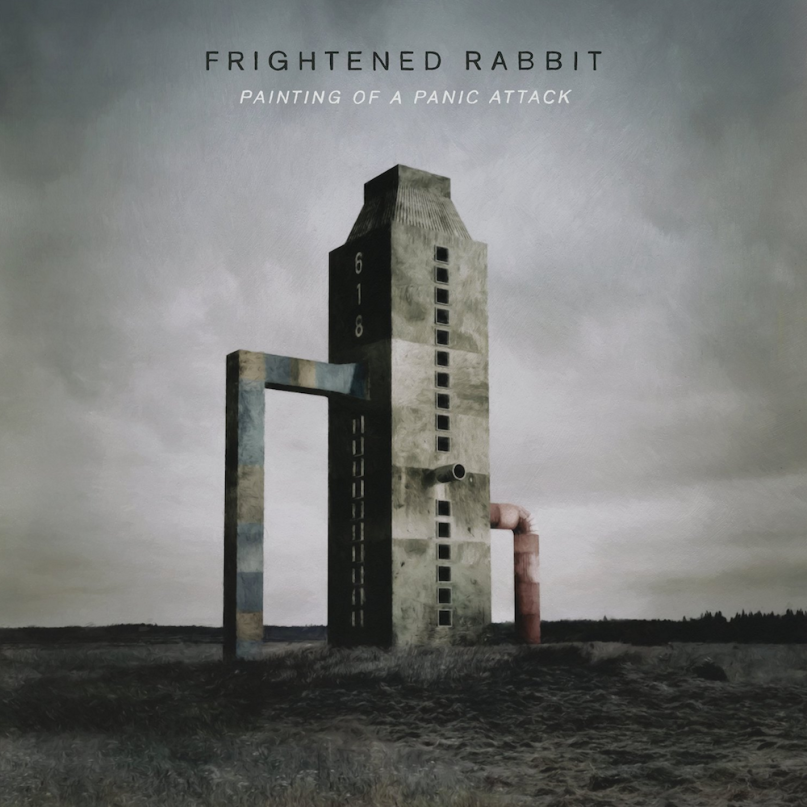 “Life might be good right now, but there’s a lot of hard times ahead,” Frightened Rabbit’s Scott Hutchison told a small child in the front row of his acoustic solo set at the End of the Road Festival in 2013. “Someone’s going to break your heart someday.” He then launched into “The Modern Leper”, a song that described his current emotional state as being on par with a horrific bacterial infection.

Frightened Rabbit’s latest album, Painting of a Panic Attack, is their first since Hutchison made the move from gloomy Glasgow to sunny Los Angeles to pursue a relationship that, for all intents and purposes, seems to be going well. (He has since moved to Hudson, New York.) The transition marks a clear shift in the band’s sonic and lyric approach. Maturity, self-growth, taking responsibility for one’s faults — though there have been some strong recent examples in the indie world, none of this, historically, has been the stuff of great rock songs. Fans live in fear of the day when their favorite artists make peace with the inner demons that torment them, but also inspire and motivate them to achieve great things creatively. On Painting of a Panic Attack, Hutchison writes from a different place, both literally and figuratively. He and his bandmates were separated by the Atlantic, composing over email and figuring out the best way to move forward.

Fittingly, Painting of a Panic Attack sees Hutchison making progress in tentatively laying to rest some of the turmoil that inspired the band’s first three works and just-over-the-top-enough songs like “The Modern Leper”. That process started with the fourth album under the Frightened Rabbit moniker, 2013’s Pedestrian Verse. Although Frightened Rabbit began as a solo project, it has grown over the years to a full five-piece ensemble, and Pedestrian Verse was the first time that the band experimented with writing as a team. Although the end result was more comprehensive and polished, in songs like “Backyard Skulls” there was still just enough of the familiar maudlin to give the people what they wanted.

“It feels like what we’d been chasing for years came to a conclusion with Pedestrian Verse,” Hutchison told Line of Best Fit last August. “It was time to reassess where we wanted to go, and what sound we wanted.” In keeping with this ambition, Frightened Rabbit partnered with The National’s Aaron Dessner as producer on this latest effort to continue to take their work in a more refined direction.

In sound, at least, Painting of a Panic Attack finds even more of Frightened Rabbit’s characteristic rough edges smoothed away to make room for sonic grandiosity. Early on, “Get Out” pairs electronic beats with plaintive synths to create a sparkling new soundscape. “Get out of my heart, she won’t, she won’t,” Hutchison sings, as his brother Grant comes thundering in on drums. It’s a marked shift from the plucked guitar intimacy and off-the-cuff feeling of, say, “Poke”, from 2008’s The Midnight Organ Fight.

Front and center of Frightened Rabbit’s past output has always been Hutchison’s verbose and witty verse, and one of the biggest shifts on Painting of a Panic Attack is the way that the lyrics pull back to make room for more high-concept instrumental flourishes. It’s Frightened Rabbit as arena band (or at least a mid-sized club), instead of the drunk and sad bloke clutching his acoustic guitar on open mic night at the local pub.

In a way, this new showiness seems fitting; the emotions on Frightened Rabbit albums have always been oversized, life-and-death. Hutchison will probably never quit drinking and fucking enthusiastically, nor will he stop parsing his regrets in the morning; it’s part of what makes his work so genuine and relatable. On Painting, however, the stakes feel just a little bit lower, and it’s almost a relief. “I have a long list of tepid disappointments,” he sings in “An Otherwise Disappointing Life”. To which anyone listening might think, Same. In “I Wish I Was Sober”, Hutchison sings yet another ode to one of his favorite vices, admitting, “Wrap my hand around the glass again/ We all thought I might change as I got older.” Songs like “Lump Street” open up the scope of the album a little, reflecting a hand-to-mouth gloominess that feels true to his Glasgwegian roots.

Painting of a Panic Attack may sound bigger and thematically a little more mature, but any fans who were worried that happiness on the West Coast might change Hutchison’s relationship with his art can breathe a sigh of relief. By the time the stripped-down and gorgeous album closer “Die Like A Rich Boy” rolls around — finding Hutchison singing, “I want to die like a rich boy in a lake that bears my name” — you find yourself grateful that Frightened Rabbit took this leap. There’s no cure for leprosy, but as they say, what doesn’t kill you makes you stronger.

Essential Tracks: “Get Out”, “Lump Street”, and “Die Like a Rich Boy”