The rock revivalists release their most realized, independent, and articulate album yet 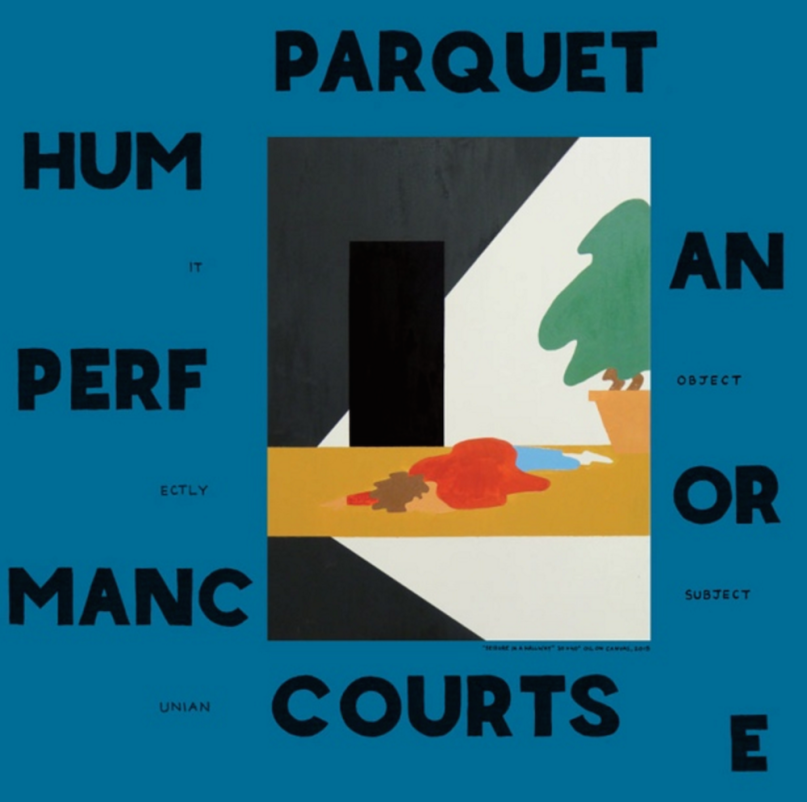 By now, it should be easy to roll your eyes at Parquet Courts. Frontman Andrew Savage, guitarist Austin Brown, bassist Sean Yeaton, and drummer Max Savage are their own stereotypes. The four look exactly the way their music suggests: gangly white dudes with ruffled button-ups, shaggy hair, and forlorn faces that scream “I Don’t Care, Really, I Don’t!” They publish DIY rock at an alarming rate, pulling on post-punk and garage as need be while mainstream’s all-encompassing jaws chew up most everything they release (last year’s vapid EP, Monastic Living, withstanding). They’re the poster boys for early 2010s revival rock, but they take themselves too seriously to fully live up to Pavement and Wire comparisons. It’s an eye roll waiting to happen. The thing is, they never pause to let you do so; they just keep stepping up to the plate and raising the bar ever so slightly in order to push themselves — and, as such, it’s difficult to find fault in what they do.

So is the case on Human Performance. On their sophomore LP, Light Up Gold, Parquet Courts mocked country with album artwork that saw a cowboy mid-buck on a horse. On Content Nausea, they included a cheeky cover of Nancy Sinatra’s “These Boots Are Made for Walking”. Now, the four fully embrace their Texan roots without going spurred-boot in the process. Single “Berlin Got Blurry” brings their usual punk sass to light with Western guitar, letting a plucked line ring out while organ trots behind them. It’s the seamless weaving of country guitar with thick rock. “Keep It Even” follows with similar gusto. Parquet Courts are by no means a country act, but when they bring this flavor to the mix, it separates them from the rest of the blunt rock acts slurring deadpan lines.

They don’t need to keep Western roots the whole time, though. Human Performance starts off with the head-nodding guitar we pin to the band’s name. “Dust” plods along with little ego, drawing background noise like piano falsettos and chirping birds into the mix. It’s all about straightforward rock riffs, the kind that make it effortless to fall in love with backyard punk’s simplicities. Now, when they do go for feel-good melodies, Parquet Courts trick themselves into slightly off-kilter delivery. “One Man, No City” sees an elastic guitar part hold hands with, of all things, bongos. The instruments sound as if they’re rotating in a circle, taking turns stepping into the middle in order to jab one another playfully, particularly during a sloppy duel between guitars mid-song.

Parquet Courts pull those repetitive parts off by pairing them with long-winded stories that vary in depth. In the album’s most detailed work, “Human Performance”, the fragility of a relationship can be caught dissolving. Musically, it’s an echo-laden room where the protagonist suffers from confinement, isolation, and the glaring presence of his own romantic ghost. On “Two Dead Cops”, a romping bass line guides one of the bands most vivid tales to date. “Said the police bastard, ‘We lost two lives’/ G train delays ‘What else is new?’/ B43 dead ‘I’m calling a car,’” Savage sings. “Somebody follows you home in the dark/ Can’t look back all the gates are down/ They could do anything, there’s no one watching.” It’s followed up not by another political fight song, but a guilt-ridden call for personal change. “I commit crimes and call them mistakes/ Nothing denies like a heart in doubt,” he sings on “Pathos Prairie”. He relates it to a roll call of pasts and presents: embraces, lessons, vanity, hopelessness, lost love, wildness, purity, promises. Parquet Courts are haunted by our world’s terrible news ticker, and they’re willing to admit how their own fear falls flat in comparison.

When they don’t know where to go sonically, the band calls on proper figures to step in. Jeff Tweedy is responsible for two of the album’s best guitar moments: the main riff on opener “Dust” and the air guitar-worthy solo on “Keep It Even”. And yet, Parquet Courts don’t spotlight it more. There’s no titular “Feat. Jeff Tweedy” or in-song attribute. It’s about the music, but even more than that, it’s about non-assuming personalities. The band has strayed away from any form of a social media presence ever since their debut. Ditching attention-grabbing headlines is another way for them to opt out of commercial press and heavy-handed hype, though they often garner it all the same.

Maybe the reason Parquet Courts are good at what they do is that what they do is so easy. If that were the case, though, we would be over them by now, too busy chasing after a band rolling out similar copy to applaud their own. Parquet Courts are good at what they do, where technically elementary guitar lines are penned with the overwrought, overthought, overwritten edits a mind like Savage’s can’t help but imbue with meaning and stress. Like the Velvet Underground or Beat Happening, Savage and co. are too invested in the meaning behind their songs to settle for truly simplistic work. Like the slow pace of “It’s Gonna Happen” and “Steady On My Mind” suggest, they aren’t looking for lazy downtempo fillers. It’s the first time Parquet Courts are molding slow dance cuts into proper tracks, marking a true change in style that represents how much they’ve grown.

Parquet Courts may have just released their most realized, independent, and articulate album yet. Like Sunbathing Animal, Human Performance is an easy listen that’s more nitpicky than initial plays suggest — but the band probably doesn’t want you to think that. They probably don’t want you to think anything, really. Don’t read into it, but do challenge it. If we don’t, then where else do they have to go? Andrew Savage doesn’t create music worth blowing off, even if the rest of Parquet Courts’ image, though petty, makes it easy to do so.