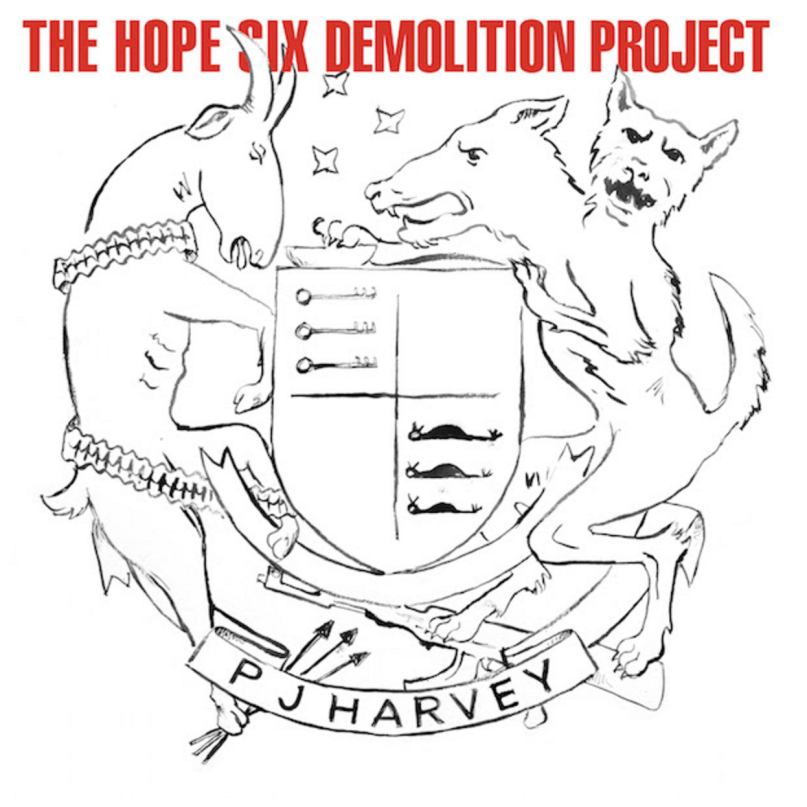 If PJ Harvey’s intention for her new album was to get people talking, then The Hope Six Demolition Project is an unqualified success. That’s what happens when a famous rock star travels the world, observing war-torn, poverty-stricken, tragic, and otherwise profoundly different places and using those observations for a seemingly political album.

Leading up to her first truly “political” record, 2011’s Let England Shake, Harvey hesitated to approach large issues outside her own experience. “I’d never felt that I’d reach the place with my writing that I could talk about these things well in a language that would work,” she told NME. The process of discovering that essential political language for Let England Shake, an album focused on the first World War, is quite telling. She spent years researching the events, poring over the poetry of Harold Pinter and T.S. Eliot, and reading testimonials from participants of other conflicts, specifically civilians and soldiers in Iraq and Afghanistan. She digested as much of the reality she could, developed her own take on it, and then wrote songs that demonstrated her perspective. It’s easy to assume that The Hope Six Demolition Project works by that same process, but there’s another language at play here: journalism.

Harvey’s research for this record involved touring Kosovo, Afghanistan, and Washington, D.C., taking in the places firsthand, often with a guide. A lot of controversy has arisen over her treatment of the latter particularly. “The school just looks like shit-hole,” she offers. “Now this is just drugtown, just zombies/ But that’s just life.” Apparently, some of these words are taken directly from the man who led her through D.C., a reporter no less, The Washington Post’s Paul Schwartzman. It would seem that rather than make a direct claim at authority, or immersive personal knowledge of the situation, she was focused on portraying the reality as seen by those who have it. Also telling is Schwartzman’s own account of the day published in the Post, in which he says Harvey’s publicists denied a follow-up interview (he was unaware of the legend in his backseat when giving the tour), but that Harvey would “love the idea of you writing about your experience that day.” She hasn’t explained her own feelings on the songs, let alone the environment on which they report. Instead, she wants you to see that these words are coming from other people. It’s entirely possible that every single one of these words comes from the mouth of another. (Though considering the purple descriptions of native herbs creeping over the urban landscape on “Medicinals”, that seems unlikely.)

The album has led D.C. politicians, citizens, and music critics alike to skewer Harvey for saying awful things about a place she saw through a car window. One even called her the Piers Morgan of music. It’s a cute comparison — a Brit stepping into America’s issues, raking it around without experiencing it, and talking about it from a place of privilege and authority — but it’s not quite accurate. Harvey isn’t injecting herself into the frame at every opportunity or offering inane opinions. She wants to stand up and hold a frame on the problem — to make you see it, confront it, and form an opinion on things that we too often push out of our minds. By describing the woman in a wheelchair in “Medicinals” rather than commenting on her, by describing urban blight on “The Community of Hope” rather than offering some kind of moral or in-depth analysis of the good that’s happening, she’s attempting to focus on what still needs to change in order to spread the unease she has to millions of others.

That’s the problem with the record though: she’s holding the frame. She can hold the frame anywhere she wants, but she has chosen this, here, now. There’s no such thing as entire objectivity. Arranging “facts” is still an act of imbuing perspective. The frame is a part of the story. Even if she didn’t call the school a shit-hole, she chose to include someone calling the school a shit-hole. On “Chain of Keys”, Harvey describes a woman in Kosovo who carries a ring of keys to the houses of her neighbors who have fled. “We ask but she won’t let us in,” Harvey sings, unclear as to whether the old woman means the homes or herself. In the song, Harvey relates the woman’s words (“‘A circle is broken,’ she says”) but also offers some words from a deliberate perspective (“A key, a promise, or a wish/ How can it mean such hopelessness”). If these were the woman’s words as well, why call out the others and not these? And if they’re her own analysis of the imagery, why offer it in the midst of a lot of third-person reportage?

In the aforementioned NME interview, Harvey describes her process in a way that also haunts this record. “I work on words entirely separately from music and spend a long time making a word-form work on a page,” she notes, and that tendency informs the music here, ideas prioritized in front of melodies and arrangements. She wants you to see what she’s seen as plainly as she saw it while the music punches home the things that must’ve been the most affecting. The saxophone on “Medicinals” follows the lyrics, offering a sting at the end as if to put a poisonous period at its close. Flocks of backing vocalists harmonize along on tracks like “The Orange Monkey” and “The Ministry of Defence”, drumline snares, guitar punches, and rich horn sections making sure to punctuate the gaps between her words or the middle of stretched syllables. Discordant saxophones duel on “A Line in the Sand” after she notes that “this is how the world will end.” The music is impeccably orchestrated to serve her purposes, even if you don’t agree with them. There’s a doomed confidence to the music, an alternation between parade bluster and broken blues.

Field recordings pop up here and there, as on the closing “Dollar Dollar”, where third-world beggars clamor for the British woman’s attention and monetary favor as she drives by. “I can’t look through or past/ A face saying dollar dollar,” she sings over a gospel river. Through closing on this sentiment, it’s possible she’s portraying the journey she wants us all to take: We hear the words of others describing poverty and pain; we can no longer ignore it.

In an email to Schwartzman, Harvey’s collaborator Seamus Murphy admitted the faults of the premise: “It’s awkwardly difficult to define.” By orchestrating an album meant to embody the difficult experience of the advantaged world talking about the atrocities that surround us, the majority of the project lacks a clear stance beyond what has been readily called “poverty tourism.” Once we reach the point of “Dollar Dollar”, that didactic revelation lacks the clarity and punch needed to make up for affectless descriptions. That may be the reality, but it doesn’t necessarily make for a masterpiece — though neither would an album full of messages, judgments, and opinions.