A Necronomicon full of Mad Libs 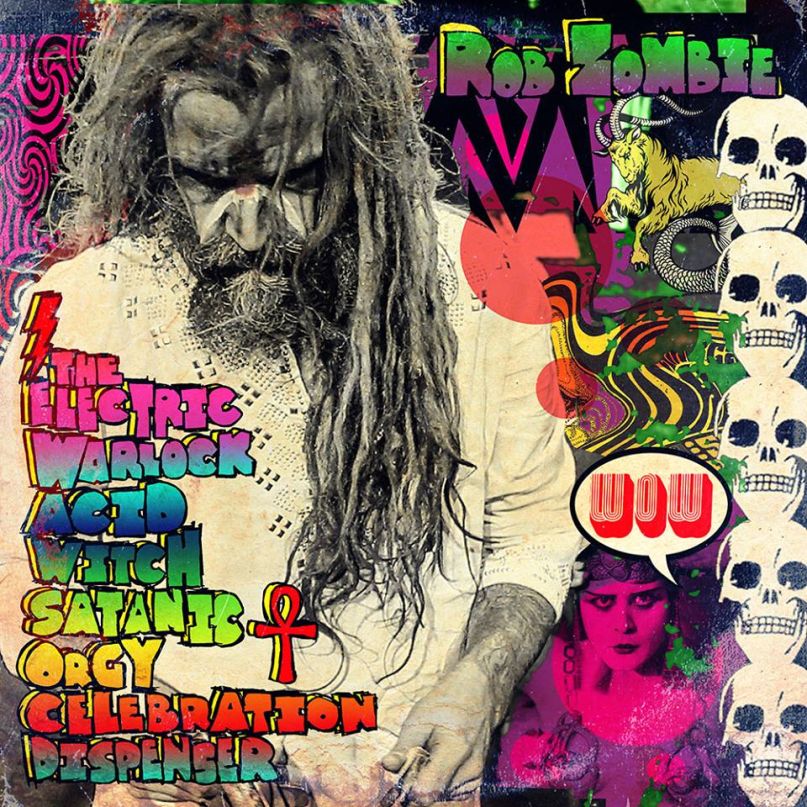 This collage approach is nothing new for Zombie, who’s been listing stuff as far back as White Zombie’s 1987 debut, Soul-Crusher. But on The Electric Warlock Acid Witch Satanic Orgy Celebration Dispenser, he all but abandons any sense of narrative or linear thought, opting instead for a Necronomicon full of mad libs to write his lyrics. 2013’s Venomous Rat Regeneration Vendor had a similarly cherry-picked title, but at least contained a handful of songs that valued some semblance of cohesion. Most notably, “Dead City Radio and the New Gods of Supertown” imagined Zombie’s perceived neutering of modern rock music as a sci-fi dystopia. While not the most original concept (or stance on modern rock music), it was still more compelling than him rattling on endlessly about what a spooky badass he (or one of his characters) is. Even though much of Electric Warlock‘s supposed to be tongue-in-cheek, tongue-in-cheek horror is still horror. It still needs to be scary. It still needs to be mysterious. And even if it’s meant to be funny, the joke still needs to have a clear trajectory. It shouldn’t just be a laundry list of weird shit.

To his credit, Zombie has penned exactly one song on his newest LP whose humor and story live up to its batshit title, not to mention its depraved music video. That would be “Well, Everybody’s Fucking In a UFO”, where he adopts a Claypool-ian twang to patter-sing about a midget unable to catch the alien orgy he knows is taking place in the sky above him. Unabashedly profane and silly, the yarn finds Zombie drawing from his pop culture fetishes — gory schlock, science fiction, comic books, and classic rock — to create a genre tale that’s singular and clarified in its vision, something he often has a hard time doing in his music as well as his films.

Although Zombie’s B-movie-in-a-blender lyrics come up short, Electric Warlock at least stakes a claim at being his most musically heavy album since 1998 solo debut Hellbilly Deluxe, or maybe even White Zombie’s Astro Creep: 2000. Faster and less danceable than the likes of Venomous Rat and 2006’s Educated Horses, most of the briskly paced songs rely on the dual-piston jackhammer of John 5 and Piggy D’s guitars, more focused on intensity over groove than Zombie’s previous work. On top of lending the album an industrial heft, the bluntness makes the slower macabre touches all the more pronounced: Ginger Fish’s military drums on “Satanic Cyanide! The Killer Rocks On!”, the finger-plucked acoustic scale to “A Hearse Overturns With the Coffin Bursting Open”, the Alan Howarth synths of “Super-Doom-Hex-Gloom Part One”.

Not coincidentally, two out of those three tracks are the latest of Zombie’s instrumentals (the very first being Hellbilly Deluxe opener, “Call of the Zombie”), Frankensteined to life with hissed demon breath, crackling movie quotes, and apocalyptic black noise. To say he should never sing would be reductive and offensive, and yet I can’t help but wonder what a wordless Rob Zombie album (save for the samples) would sound like — perhaps a shock-rock answer to MF Doom’s Special Herbs. Zombie’s music has always been indebted to movies, and Electric Warlock is most cinematic when it’s riding on atmosphere, not grindhouse randomness.