Experimental singer-songwriter returns to the Bard for inspiration 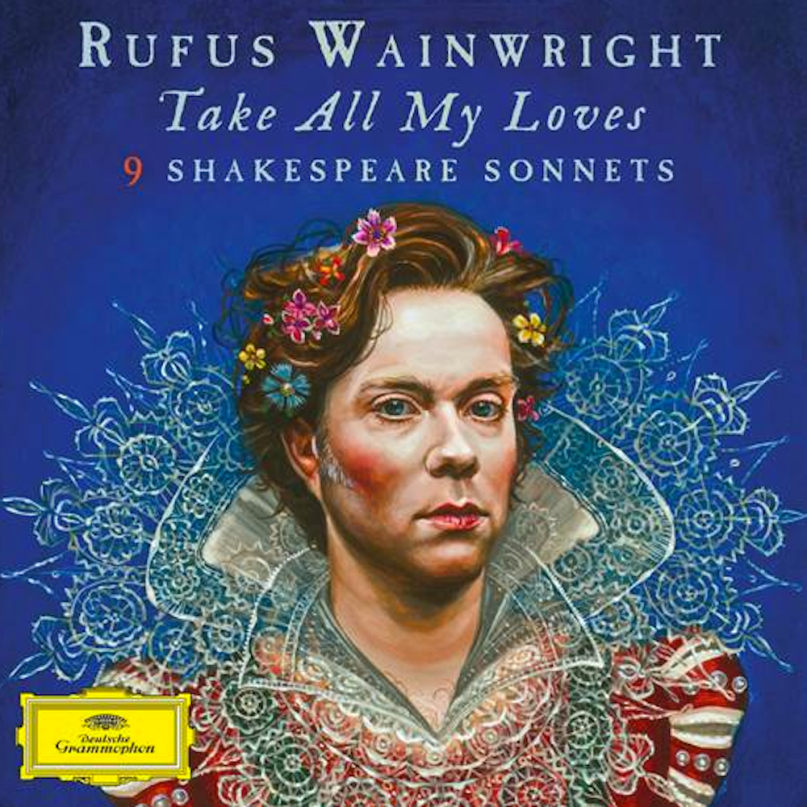 It’s hard to imagine how someone whose last album was an opera could out-do themselves, but Rufus Wainwright has achieved just that with Take All My Loves: 9 Shakespeare Sonnets, to be released via Deutsche Gramophon on April 22, 400 years after William Shakespeare’s death.

Wainwright has a history with the Bard’s sonnets: The San Francisco Symphony commissioned Wainwright to orchestrate five sonnets, and the singer-songwriter also composed music for playwright and director Robert Wilson’s Shakespeare’s Sonnets. Wainwright’s 2010 album, All Days Are Nights: Songs for Lulu, included three of these, including “A Woman’s Face”. Rather than stick exclusively to his symphonic and theatrical sonnet ties, Wainwright returned to other old collaborators. Marius De Vries, the producer of Wainwright’s Want One and Want Two albums over a decade ago, collaborates on this new album, which largely pairs gilded orchestral pieces with readings by guests including Helena Bonham Carter, Carrie Fisher, and William Shatner.

Two interpretations of “A Woman’s Face” demarcate the album’s 16 tracks — a “pop” version done by Wainwright and an operatic version by Austrian coloratura soprano Anna Prohaska, who sings four other tracks on the album. Both are gorgeous, but the source material suggests interesting interpretations. Sonnet 20, lyrically written in the voice of a man, essentially translates to, “You’ve got the good looks of a handsome man, but you attract both women and men. But since nature gave you a dick, I’ll keep your love and women will enjoy your body.” Four hundred years later, this sort of complex feeling remains relevant, demonstrating how beauty is a fine, genderless line, and that grappling with sexuality is futile.

Another enduring message drives tracks 11 and 12 from Sonnet 129, linking to our current age of Tinder and online dating, proclaiming that sex is a way of squandering vital energy. People go to absurd lengths in its pursuit, only to disproportionately hate it once they’ve had it because it drives them crazy. They’re extreme when pursuing sex, extreme when having it, and extreme once it’s over. While you’re anticipating it, it seems like a joy; afterward, like a bad dream. Recited by William Shatner and sung by Prohaska, the melody builds into a wild, dissonant stair-stepping, like an Arnold Schoenberg composition, ricocheting between the highs and lows experienced by someone with a dynamic sex life.

A similar discord arises between the lines of “Unperfect Actor (Sonnet 23)”, except the drama is formed from Bonham Carter’s breathless recitation, Fiora Cutler and Martha Wainwright’s piercing vocal duties, and the quartal and quintal harmonies between the lead melody and a lot of noise. It falls somewhere between Robert Fripp’s guitar work and the audiovisual scheme of Emerson, Lake & Palmer’s Tarkus, sonically steamrolling every other track on this album. A close second is Sonnet 40, which sounds like a marriage between orchestral instruments and synthesizers inside of a Rube Goldberg machine — each little mechanical tick occurring in sequence, until the whole thing becomes a busy, whirring fever dream of someone in pursuit of love. And if anyone can sell that complex, theatrical, beautiful depiction of humanity’s deepest emotions, it’s Wainwright.