Sorority Noise – It Kindly Stopped For Me 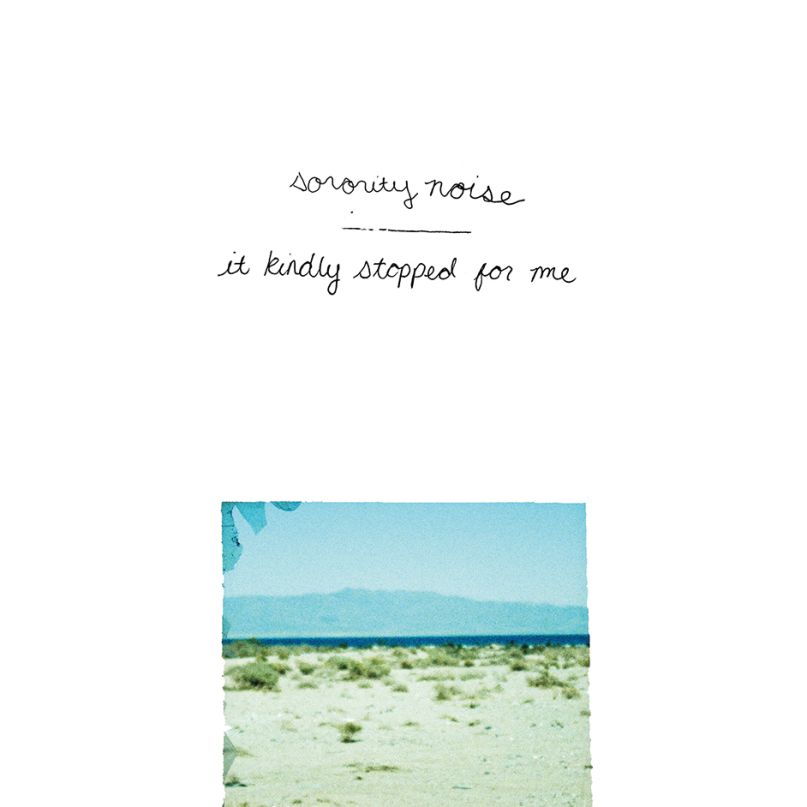 Sorority Noise frontman Cam Boucher hit a wall when he first started playing music — at least, that’s what he told Washed Up Emo founder Tom Mullen in a video interview last August. “I got stale and I didn’t know what to write about anymore,” Boucher said. That is, until he submerged himself in the emo of yore. “Then I opened this world of, like, ‘No, you can talk about your real feelings, not trying to relate to an audience, strictly yourself. And you can be a freak onstage, and people might not like it, and that’s ‘cause you love what you’re doing.’”

Boucher dove into emo, and the genre is better for it. His tenacious adherence to his vision, no matter how peculiar it can be, fueled Sorority Noise’s breakthrough sophomore album, last year’s Joy, Departed. This wasn’t a solo endeavor, but on Joy, Departed, the Connecticut four-piece operates like a single unit, traversing euphoric power pop highs and somber, quasi-symphonic lows together. The band had only been together a couple years when Sorority Noise dropped the album last June, and it’s evident in the frayed edges and splinters.

But Boucher used those bumps to his advantage, tying into the scars formed once the relationships and drug abuse he sings about had become a memory to put into words. As dark as Boucher can get, his voice and music show a person with dimension and contours — and that’s because he’s willing to try music on a whim. It’s a strength that’s not only given him the ability to flesh out and excise his demons, but to invoke the troubles of an animated character. In October, the band covered “Tiny Rick (Let Me Out)”, a tune the brilliant, alcoholic scientist Rick Sanchez from Adult Swim’s Rick and Morty sang while trapped in the body of a younger version of himself. Sorority Noise’s version hints at the show’s humor while infusing it with an empathy that wasn’t quite there before.

Empathy is key to the best Sorority Noise tracks, and that emotion anchors It Kindly Stopped For Me. The four-track EP barely exceeds 10 minutes, and the short run time is a necessity. Boucher and company sift through so much loss and death in very little time that any additional music would verge on excess, or dilute these intimate ruminations on loss. It Kindly Stopped For Me is largely quiet; Boucher’s voice often slips into a murmur, and on a couple of tracks the movement in the air is as much an instrument as an acoustic guitar. But the EP is intimate because it so often feels like it’s ripped from private moments. On closer “XC”, a tender, twinkling melody that blossoms into a tiny symphony, Boucher sings about how death has taken hold of more of his friends than he’d care to consider, and his hushed singing hovers over the track like a voice emerging from the back of your head late at night. Turns out that’s when the lyrics for “XC” popped in Boucher’s head: He told The Fader he wrote the song on his phone’s voice memo app while driving overnight while on tour.

The in-the-moment catharsis spills into much of It Kindly Stopped For Me, which has something to do with the way Boucher conceives his songs. Boucher was diagnosed with manic-depression in 2012, and in his interview with Washed Up Emo, he talked about how writing music has helped him through manic episodes. Listeners so frequently graft their own feelings onto a pop song that’s helped them through rough patches that it’s easy to forget these three-to-five minute bursts of notes and emotion are borne from specific experiences, not our own. Boucher puts forth his inspirations in blunt and unflinchingly personal detail, and even though he shields the people in his life from public scrutiny, he isn’t afraid to lay his thoughts bare. Wed with Boucher’s dedication to writing music that feels genuine to his guts and ears, Sorority Noise reliably make songs that reverberate, and It Kindly Stopped For Me often does.

The EP reaches its apex with “Fource”, its shortest and most challenging song. “Fource” splices together a nimble, acoustic guitar melody and what sounds like a voice-memo recording Boucher made while walking through a wooded path or on gravel-strewn terrain — the crunch of land beneath Boucher’s feet is audible as he sings, timidly. The first words out of his mouth: “We lost another one today.” From the sound of Boucher’s semi-spoken melodic lunges, “Fource” operates like a stream of consciousness. It’s a lullaby Boucher sings to himself while working through a private moment of grief.

Emo, like any genre of music, can be a source of comfort, and for Boucher it’s an empowering vehicle that’s allowed him to see through moments otherwise too difficult to process. “Fource” is difficult because it’s a capsule of a vulnerable moment and the way it immediately affects a person’s actions. Boucher chose to confront his feelings through song, and he did it for himself. The fact that he decided to share it with others seeking solace through sound is a gift.