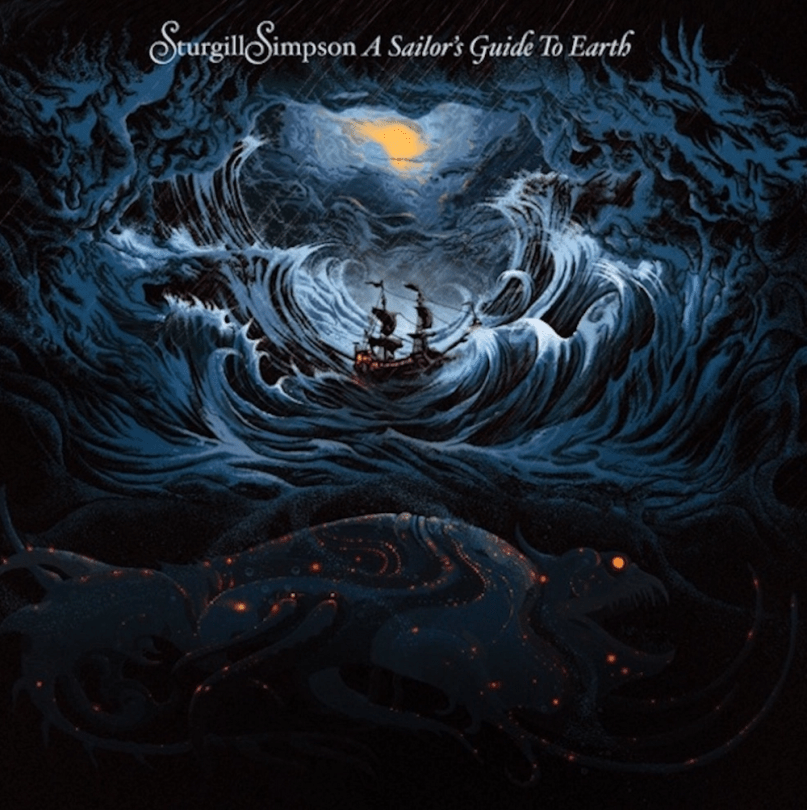 Want a surefire way to ruin a night at the symphony? Try sucking up every available moment before the conductor raises his baton unsuccessfully convincing a stubborn rockist boyfriend that Sturgill Simpson isn’t a (cough, cough) country artist.

Yes, the 37-year-old Nashville-by-way-of-Kentucky transplant possesses a deep-throated drawl easily bouncing between whimsy and danger — the kind that makes you weak in the knees and prone to hasty decisions. And, yes, pedal steel guitar oozes into every crevice of his material like chocolate syrup showing a bowl of vanilla ice cream who’s boss. Hell, Simpson himself told Rolling Stone: “I’m never going to make anything other than a country record. As soon as I open my mouth, it’s going to be a country song.” But, the Grammy nominee runs circles around any other performer in the genre with his devilish punk attitude. That’s why his 2014 breakthrough Metamodern Sounds In Country Music is awash in psychedelia and rockabilly. This fluid configuration of musical styles is even more pronounced on his highly anticipated follow-up, A Sailor’s Guide to Earth, where gritty Skynyrd rock makes out with tarnished Memphis soul while hip-swiveling Elvis plays hall monitor.

Slapping Simpson with a one-size-fits-all label misses the point. Just look to his gripping cover of Nirvana’s “In Bloom” for confirmation. Simpson produced the record himself — his first for a major label — in Nashville while gaining his sea legs in the fatherhood department, which adds to the album’s isolated narrative. First-time parents rarely acknowledge, in between the flood of baby pictures posted on Facebook, just how transformative and lonely bringing a life into the world can feel. That initial year is a period of intense joy and fear, highlighting both the majestic possibilities of the world and its brutal truths. It’s a cosmic thing that Simpson captures in a nine-track song cycle where he addresses his son directly on everything from car maintenance to drug addiction.

“Keep It Between the Lines” buries a manual for living a happy and healthy life underneath a torrent of skronking horns and gleaming organ, courtesy of The Dap-Kings and Simpson’s regular bandmate Bobby Emmett. In interviews, Simpson doesn’t shy away from an unruly past that led him — starving for structure — to join the Navy before settling into songwriting. So, it comes across as a bit of wishful thinking when he guides his son toward the straight and narrow. “Keep your head out of the clouds/ And remember to be kind,” he offers. “And just stay in school/ Stay off the drugs/ And keep between the lines.” He knows these nuggets of wisdom will probably go unheeded, but damned if he ain’t gonna try with the phrase every father has uttered at least once: “Do as I say/ Don’t do as I’ve done.”

Lead single “Brace For Impact (Live a Little)” lives up to its title thanks to Laur Joamets’ roiling guitar and an irresistible swampy groove while imparting the sad reality that time is limited, so you best get out there and kick its ass. “Welcome To Earth (Pollywog)” doles out stately strings best reserved for a dignified night out in heels before going rogue in the middle with an Amy Winehouse-worthy strut that sympathizes with the working parent’s plight. Moaning pedal steel guitar mimics the solemn call of seagulls on the melancholy “Breakers Roar”, which gently lays out the tools for coping with a depressive episode.

But the album’s lessons don’t solely come in bursts of soul man calisthenics or bumping bravado. “All Around You” is steeped in the tradition of the Staple Singers in both music and message. A lush, horn-bathed pep talk for the lowest of the low times, the song relinquishes control to something bigger than Simpson. “God is inside you, all around you and up above/ Glowing, showing you the way,” he bellows, offering a path to perfect peace. Fiery album closer “Call To Arms” is a screed against authority, with special attention paid to the military. As a former Navy man and new parent, Simpson doth protest not enough. A monster storm of squeaking horns, roadhouse guitar, and hyper keys emphasize his furor. He lets out a squawk like a crowing Peter Pan before spitting out a steely coda through gritted teeth: “Bullshit on the TV/ Bullshit on the radio/ Hollywood telling me how to be/ Bullshit’s got to go.”

Written for one lucky baby boy, A Sailor’s Guide to Earth also welcomes the unmarried, infertile, abandoned, and middle-aged with unconditional love. If Father’s Day is just another Sunday, let Simpson be your proxy.

Essential Tracks: “All Around You”, “Call To Arms”