Pop punk outfit channel their full energy into the absurd 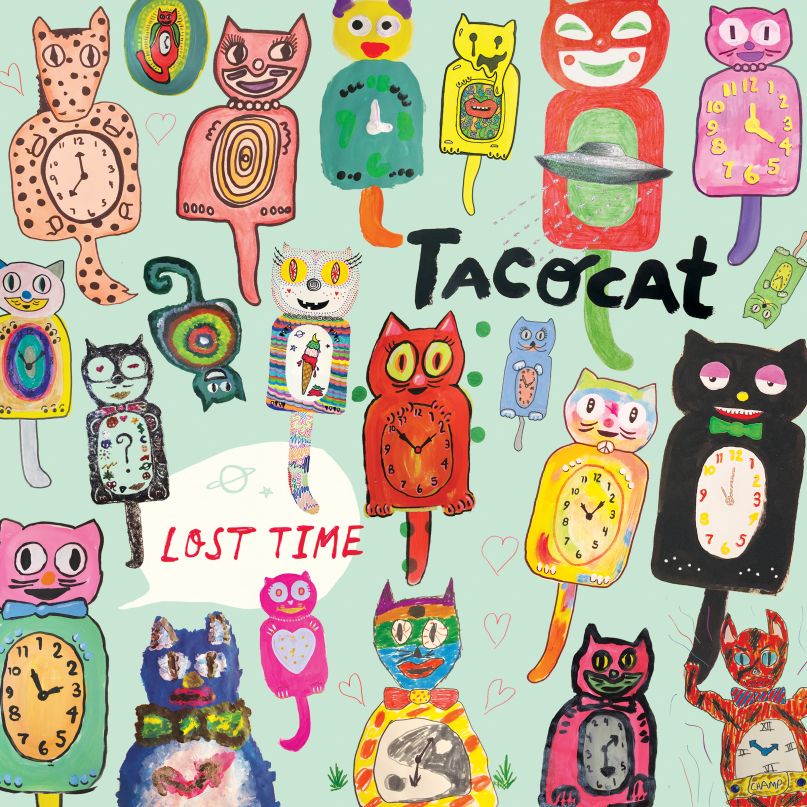 Tacocat love to be silly. From music videos with dancing lobsters and gumball-covered album art, to their space-age fashion and candy floss hair, being a goofball is practically in their job description. Their latest release, Lost Time, fits the bill, embracing the ridiculous with open arms. Don’t let the antics fool you, though, as a method is revealed in the madness over the course of the album. Tacocat have some things to say, and they chose this pop punk vehicle because they don’t want to be ignored.

For this reason, Lost Time is at its strongest when it picks a good target. The distaste for office workers getting too crazy makes “I Hate the Weekend” one of the funniest, and most fun tracks. The energy kicks in right away through fuzzy riffs and furious, shouty verses. Emily Nokes has a gem of a punk voice, and its casual strength comes out even further in the grinding sarcasm of “Men Explain Things to Me”. The biting irony in simple rhyming lyrics — “Though I know all about the words you’re spitting out, the floor is yours without a doubt” — get the point across, and the sentiment would make Rebecca Solnit proud.

That said, it’s a shame to see Nokes not stretch her limits, and there are times the band would benefit from being bolder or angrier. Uptight weekend warriors feel like the right enemy for Tacocat, a band that can’t stand to take themselves too seriously. While a lot of these songs have a purposeful feminist bent, there are just as many that aim purely for laughs. The opening track, “Dana Katherine Scully”, lauds the beloved supernatural detective of X-Files fame. Similarly, “Horse Grrls” mostly details girls who are particularly passionate about horseback riding, although it does argue for shirking societal expectations in favor of their equestrian dreams. Bafflingly, this is one of the most energetic songs on the release, with an explosive and noisy chorus. Only Tacocat would decide to channel the full force of their punk feelings into something so absurd.

As the release never lulls in speed or spirit, it gets a bit exhausting as a whole. The intensity causes that fatigue some, but the lack of variation is the real culprit. The band’s stamina for short, power chord-driven songs never fails, but some listeners may wish for a quick break. Without much variation in their pop songwriting, some of the second half of the album starts to blend together into an extended punk anthem with inconsistent themes. These tracks are still undeniably fun, though, and like much of Tacocat’s work, feel produced with live performance in mind.

Lead single “Talk” offers one brief moment where the album shifts away from this propulsive tone. The moody track builds slowly into a single, chaotic chorus that is so satisfying it feels a shame the song isn’t longer. Nokes’ voice is once again the star, and as the song unravels, she reaches a wild new power. This track suggests that the band could easily venture further away from the bright sound that has become their signature. It doesn’t negate what the rest of the album is doing, but it does open up a window for future exploration.

Is it okay for a band to just want to have fun? Even though the more earnest and pointed moments of Lost Time shine brightest, the answer is still yes. Tacocat so clearly thrive in the realm of the amusing and the ironic, and it would make no sense for them to turn their backs on that. Instead, they continue to work out straightforward messages in their silly statements. Tacocat want to be taken seriously, but they definitely don’t want to be a serious band.

Essential Tracks: “I Hate the Weekend”, “Horse Grrls”, and “Men Explain Things to Me”