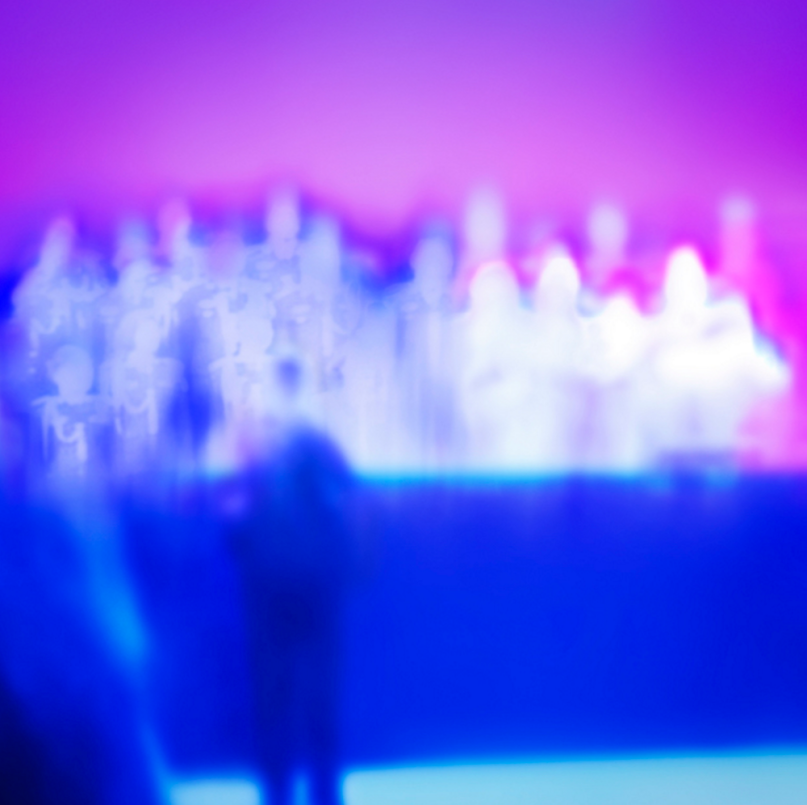 “I did an interview once, and the guy was expecting to meet Nosferatu or something, and I’m basically Larry David instead,” Tim Hecker laughed when I spoke with him a couple of years ago. That reporter’s expectation wasn’t unfounded; the Canadian electronic composer’s music can give off an air of mystic darkness, of elemental seriousness. But listen closely and there’s a mischievous, subversive sense of humor there too — much like Curb, the darkness is something to laugh about as frequently as it is something to be unsettled by.

Depending on your expectations, that either couldn’t be more clear or more obfuscated by the start of Hecker’s new album, Love Streams. There are elements that sound borrowed from New Age. The record was tracked in Iceland, and the synths capture the Northern Lights. The eight-person choir intone peaceful, droning mantras that will om you into bliss. But this isn’t the album where Hecker goes full Yanni. There is, instead, a clever tweak to those tones and a darkness lacing through the grandeur.

His aim, as he explained to Rolling Stone, was to “eviscerate and interrogate the voice.” To that end, he brought in Oscar-nominated composer Jóhann Jóhannsson for choral arrangements, which the Canadian musician then rearranged after recording. The choir were given Latin lyrics (of whose origin Hecker is apparently unaware, provided by Jóhannsson), which were then reversed prior to singing, and then further chopped and rearranged by Hecker in the editing process. He was inspired by 15th century composer Josquin des Prez, but the final results’ intersections, competing layering, and haunting echoes feel like a chilly postmodern wasteland. He’s compared the music to a “river … streams of transcendence,” and that water runs deep and cold. Or maybe, considering “Up Red Bull Creek”, a better word might be fizzy.

To that end, Love Streams achieves Hecker’s goals. Perhaps the most natural communicative tool, the voice, here is twisted and clouded. While some may even struggle with the Renaissance compositions that inspired these twists, the de-languaged artifacts here are just the beginning of the disorientation. On the appropriately titled “Voice Crack”, for example, brilliant female voices are elongated to globe-circling length and sifted through crumbling square-wave synths that stutter and squelch just as they start to form a recognizable time signature or pattern.

Hecker also described eating whale sashimi and having hangovers from Icelandic liqeur, as if his swirling compositions needed any more justification for their spinning. That whimsical image carries through in the music as well. Though Love Streams lives up to the majesty of the land in which it was recorded; the playful push-and-pull has a knowing charm. Opener “Obsidian Counterpoint” grows from pulsing winds to epic tubular bell synth patches, as if the monolith from 2001 were falling in the middle of a light-show at the world’s edge. The concussive “Castrati Stack” pairs some of the largest, clearest choral arrangements with headphone-bouncing tones and blocks of burnt synth noise. “Music of the Air” trills and glitches the vocals into an approximation of Auto-Tune, yet not even actually reproducing that familiarized version of defamiliarizing natural voices. It’s as if you can see Hecker smirking as he tinkers with the samples and your expectations.

“I think the risk of doing digital audio in this time, is, like, when does technology become like shitty CGI? When does it become like Michael Bay Transformers of sound?” he asked in that Rolling Stone interview. “That’s taste, and that’s a judgement you can’t teach.” Luckily, Hecker has impeccable taste. Very few composers can achieve this kind of beauty or this kind of experimentation, and yet Hecker does both, time and time again. Love Streams feels a lot like drifting along a cool river under the Northern Lights on a sailboat, until the boat sprouts wings and zooms into the heavens.