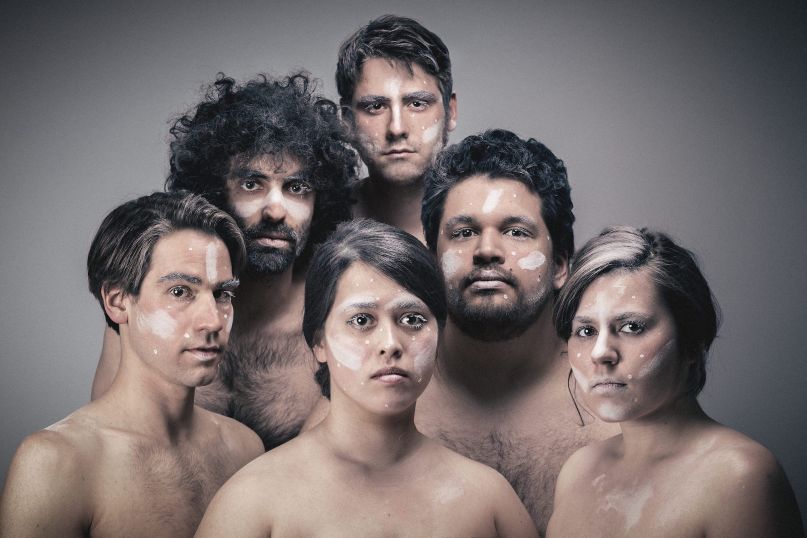 Boston’s Bent Knee proudly occupy the grey area where baroque pop, rock, and the avant-garde meet, but even they are sometimes caught off guard by their intricately woven, surrealist stylings. The element of surprise and desire to fuse disparate sounds was felt throughout their sophomore record, 2014’s well-received Shiny Eyed Babies. It shines through even brighter on follow-up album Say So, due out May 20th through new label home Cuneiform.

A press release dubs the forthcoming LP a “thrilling, aural roller-coaster ride with arrangements designed to make listeners throw their arms up in wild abandon.” Surveying Say So’s heady yet meta subject matter, it’s easy to see how such a varied sort of record could come about.

Along with “the emergence of personal demons,” the new full-length sees Bent Knee digging into the abstract, specifically “looking at the bigger picture and figuring out where we as individuals stand, and how we carve out meaning in this giant universe,” according to violinist Chris Baum.

While complex, contrasting compositions might be in Bent Knee’s DNA, much of the “surprise” in Say So can likely also be attributed to the unconventional space in which it was recorded. “A friend of ours pointed us to an empty, unlocked, million-square foot industrial complex in Boston,” says frontwoman/keyboardist Courtney Swain. “It felt like zombies were going to jump out anytime. It was a foreboding locale and gave the session a distinctly dark vibe.”

As a first look at the album, the band has unveiled a new song called “Leak Water”. It’s a relatively straightforward number compared to their past releases, as Bent Knee note; still, a potent sense of urgency tingles in the air. In a statement to Consequence of Sound, guitarist Ben Levin explains the track’s backstory and how it’s captured in the corresponding official video:

“‘Leak Water’ is written from the perspective of a little girl whose mother is pulling her through a painful morning beauty ritual. With this in mind, for the music video we wanted to feature a little girl singing the lyrics while being thrown around in some way. The video was directed by Greg Bowen, who also created the album art for Say So. Greg makes amazing art in just about any medium you can imagine, and we decided to take advantage of his range by stylizing this video like a collage.”

Check out “Leak Water” below.