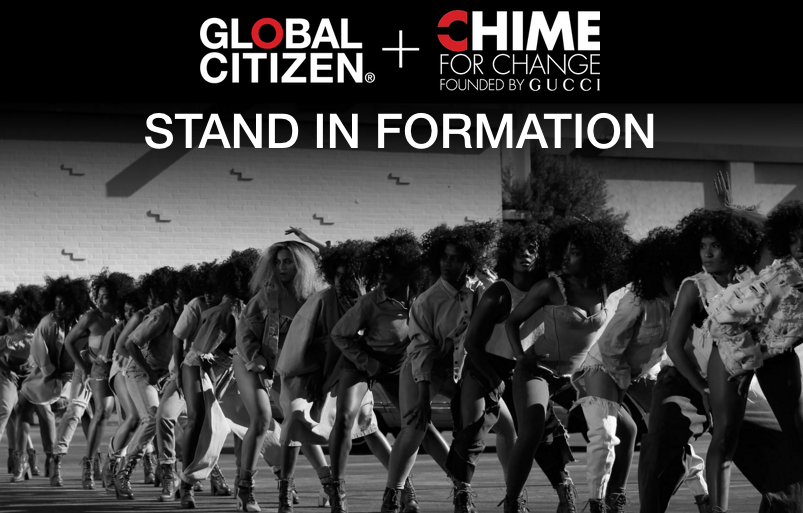 In 2013, Beyoncé launched BeyGOOD, a charity umbrella for her global initiatives. For her upcoming Formation World Tour, BeyGOOD has partnered with a trio of charity organizations to help fans get more involved with giving back.

In particular, the campaign will focus on providing aid to the residents of Flint, Michigan. United Way will set up an online donation center where fans can contribute to the water crisis relief while entering to win VIP tickets to one of Beyoncé’s concerts. The charity group will also be present at all of the Formation World Tour stops, including a special event set up around the singer’s show in Detroit.

Similar events will be held in Houston and Compton, each benefiting local causes. In Beyoncé’s hometown of Houston, the event will fund Pastor Rudy Rasmus and his work with Bread of Life, which seeks to feed the city’s hungry. The Compton event will benefit youth music and arts outreach programs through the Urban Education Institute.

Chime for Change (which Beyoncé co-founded with Salma Hayek) and Global Citizen have also signed on for the tour and will target select markets. While the Flint water crisis will be at the forefront of all aspects of the campaign, each city on the tour will see the particular issues of their community being addressed by the charity organizations.

“The Formation World Tour creates another exciting global opportunity for people everywhere to BeyGOOD, pay it forward and lend support to those in need,” said BeyGOOD’s Director of Philanthropy Ivy McGregor.  “Through our collaborations with our strategic charity partners, we’ve created simple ways for everyone to participate. Because we believe together we can make the world better – standing, living and giving in Good Formation.”

Find the complete Formation World Tour schedule, which kicks off in just six days, below.