How one Manchester-based DJ, musician, and producer is putting mystery back into techno 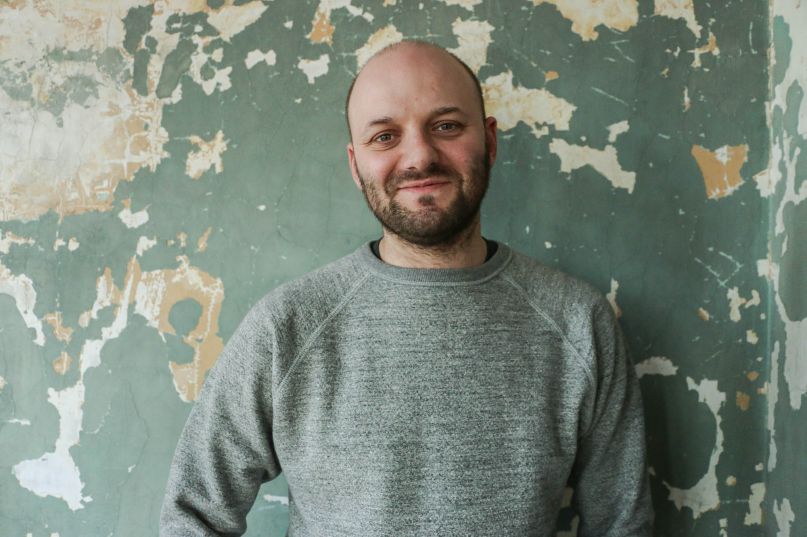 In 2016, the words “dub” and “techno” mean something far different to the average music listener than they did in the late ’90s. They signal the neon flashes of EDM festivals and deadmau5’s comically large glowing head; the immediately recognizable stuttering of “Sandstorm”; and the bass drop that’s been mocked by Saturday Night Live and parents alike. But for those who have been listening to techno and dub since the genres were birthed in Detroit and swept across the pond, they take on a peaceful meaning. Techno is an opportunity to get lost in your own cathartic interpretation of primarily machine-made sounds, and Andy Stott — the Manchester-based producer and musician behind some of today’s most moving house — morphs the two electronic genres into his own sound, now 10 years into his career.

“In the past three years, I don’t think I’ve sampled anyone’s work,” he tells me over the phone, as if astonished himself. “I’ll intentionally write a quick track in 20 minutes, but it will have effects, atmosphere, reverb, and a little bit of something I can do quickly. I write that intentionally, so I can put a sample in, stretch it, and find interesting space between two sounds that you didn’t realize was there. If you’ve got it in your mind, you can make nearly anything you want quite quickly.”

Those home-grown samples are what made 2012’s breakthrough record, Luxury Problems, such a success. With a field recorder in his pocket, Stott trudges into England’s terrain to find awkward sounds and only removes the recorder’s SD card a month later when most of the samples’ origins begin to fade from his mind. Each record sees new samples embedded. Everything is sourced from that period in time. No samples are rehashed or spliced. “I remember being on the train once, and the sound the tram made as it was slowing down was amazing, like a big gear wearing down. It dipped down and became this big, fat sound. So I sat on the tram and waited for the next stop to record it,” he says.

Those samples ditch organic tones for metallic textures. Stott places the industrial sounds of someone like Nine Inch Nails into the open space of an artist like Tim Hecker, securing a rumbling bass that somehow keeps an otherwise eerie sound from scaring listeners away. Over the past decade, his style has shifted into one undeniably his own — and aspiring musicians are taking note.

“In the early days, I felt like I was listening to a lot of music and would try to make my own versions of the songs I liked. Without knowing it, I was replicating a lot of others’ material,” says Stott. “Then it switched.” Shlom, the manager of Modern Love, Stott’s record label, suggested he try capturing field recordings. It quickly drew him into a new world. “Through sampling, I realized, ‘If I make tracks myself to sample, god knows what I might be able to find.’ There’s a constant interest in me to discover how music is made. I think that openness keeps growing larger but in a way that no longer replicates others.”

That’s when, in 2006 at the age of 24, he released his debut full-length, Merciless. Complete strangers flooded him with praise for the first time, allowing him to realize songwriting could transition from a hobby into a shared passion. Now younger musicians look up to him as an inspiration for the type of work they want to do. “The fact that people might want to base their sound off of something you’ve created? That’s crazy,” he says with a pause. “I don’t know why I haven’t thought of that, but to potentially be an artist that someone like me when I was younger was mimicking is odd.”

Over the course of our conversation, he lowers his voice at unexpected points, a reaction he later attributes to the judgement of those surrounding him. He’s taking over the phone in one of Heathrow Airport’s business lounges. Uptight men in business suits keep glancing at Stott, making no effort to hide their confusion as he babbles on about midi keyboards and gloomy electronica. It’s a comical scene that articulates his place in music without meaning to. Andy Stott is the content, relatively short fellow talking quickly with a thick British accent — the inquisitive version, not the smug version — while the music world applauds his feats and the rest of the world remains oblivious. Frankly, Stott would like to keep it that way. Fame of Electric Forest levels doesn’t suit him.

Stott’s the type of musician who slinks into the self-made recording studio in his basement that acts as a writing bunker. Softly lit walls lined with hardware make space for a single couch, a stack of instruments, and a chair placed in front of the main desk. There, on the outskirts of Manchester, is where he writes dozens of songs. “The neighbors say they can’t hear anything, but I think they’re lying just to be nice,” he laughs. “They know what I do, and it’s actually an ongoing joke. When any of them see me leaving my house, they ask where I’m going, if I’m off to play a big gig.”

Since the release of 2014’s remarkable Faith in Strangers, Stott has been busy writing over 100 songs in under a year, eventually getting to a point where he could choose nine that would make it onto this year’s Too Many Voices. It was a year of newfound inspiration thanks to Shlom and the neverending pool of grime music he was finally introduced to.

DJ Slimzee co-founded Rinse FM, London’s pirate radio station that bumped dubstep and house for young folk, back in 1994. He helped expose some of the first grime music of that time, and with it came plenty of extraordinary sessions that now prove difficult to track down. Not only had Shlom heard several of them, but he couldn’t stop telling Stott to give them a listen, particularly those between Slimzee and rapper Dizzee Rascal. “He’s been talking about it for ages, but it took him a long time to find the exact record he was speaking about,” says Stott. “You know when someone talks about something for so long that by the time you hear it the description was better than how the real thing sounds? Well, this was everything he said and more. It blew my mind — and I don’t even know what tracks Slimzee was playing.” The moment grime hit Stott’s ears, he threw himself into research mode, quickly grabbing the name of the keyboard used in Slimzee’s sessions — a Korg Triton — and heading to eBay to purchase himself one. The instrument shaped his songwriting so much that it became the backbone of Too Many Voices.

Stott became fascinated with the Korg Triton’s velocity. A single key could power double or triple voices through the instrument, allowing him to fake the sound of an entire choral group. “It’s like [the keyboard] takes control and tells me what to do – and I don’t quite know how to describe that,” he says. “It’s really, really weird. You’re creating a choir through plastic means.” Eventually the sound took shape in another form: the album’s title.

But Too Many Voices goes beyond that keyboard. “Butterflies” brings Stott into an airiness never heard before in his music, where a broken tuning oscillator allows the pitch to gradually float up and down, giving it a woozy feeling. He uses the same drum machine from his past two records as a crutch, lending the abrasive tone that makes “Selfish” sound like the older brother of 2014’s “Damage”, both of which were written entirely on said drum machine. But then comes the title track, a completely beatless number that moves with its own angry, hostile breath.

There were no goals on Too Many Voices. Instead, Stott turned to Dead Can Dance, Ryuichi Sakamoto and David Sylvian’s “Bamboo Houses”, and Yellow Magic Orchestra for inspiration on how to write constantly with texture at the forefront. “If anything, I followed the same goal I have since the beginning: not to do the same thing twice,” he says. “They offered a fourth-world feel to the record. It’s this alternate reality where you get a keyboard to sing for you. It tries to recreate a human voice, so why not get a human to sing for you? Because it’s twisted, and that’s what I drew from them.”

Those vocal effects he chased came from both the keyboard’s patches and regular collaborator Alison Skidmore, his childhood piano teacher. Once again, the two never sat together in the same room to work, but her vocals — this time pitched lower than ever for a darker style — turn into something otherworldly. “She’s as excited to receive a file from me as I am to receive a file from her,” laughs Stott. “We both want to see what the other comes up with and how the two fit together. I won’t ask her to re-sing anything that doesn’t fit quite right. I’ll just bend it to where I want it, and that’s where some of the cool manipulations of her voice come into play.”

What makes Too Many Voices a departure from Stott’s previous material are the ways in which Shlom helped Stott realize where he unconsciously hoped to end up. Out of the 100 tracks Stott wrote, most were forwarded to Shlom who then sent edit notes back. More often than not, he picked out a specific sound and encouraged Stott to stick it onto another song entirely. “He’s hearing something that he hasn’t heard elsewhere; it’s these illegal avenues that we exploit in some back-and-forth process that works very well,” Stott says of the label owner. “When you work with someone for over 10 years, you try it. If it works, amazing. If not, you move on once more.”

Throughout all of this, Stott’s contributions to the electronic world dissolve equally into house and techno, if not leaning farther into experimental realms with Too Many Voices in particular. There’s an emphasis on space that sees Stott at his most bare, making his point with fewer sounds than usually employed. “I had to learn how space creates tension and the restraint that comes with that,” he says. “When I listen to Too Many Voices start to finish, I can hear what I’ve learned, what I’ve changed, what I’ve deconstructed to work out these techniques. I feel like I’ve moved on without resting on my laurels.”

A flight attendant calls out a final boarding warning. Stott and I both seem to remember where we are. I zone out of the pulsing bubble of techno we were blocked in by moments ago. He remembers there are inquisitive eyes staring him down from lapel-snapped men. “I can’t tell you how massively these songs changed,” he says, as if to sum up his experience now that others are glaring again.

“When we sent the record off for mastering, [Shlom] played me some of the earlier versions of tracks. Some are nine months old, and honestly it was bizarre to hear a melody from one track in an old song. It was just like…” Stott cuts off, pulling the phone away from his mouth to mutter “Oh my god” repeatedly, as if pacing in circles. “It’s like looking back at a photo of you in your teens and you think, My god, what am I wearing?”

The same could be said about current techno trends, but in reverse. There’s an emphasis on gimmicky drops and oversized swells, but thankfully Stott is busy luring techno and house into darker, fanciful corners where they can be strengthened and redefined. It’s the work of a man who’s spent the last decade exploring the genre and releasing that work into the world. As he himself says a matter of seconds later: “Thank god.”