Coachella is losing its shit over Sia’s performance 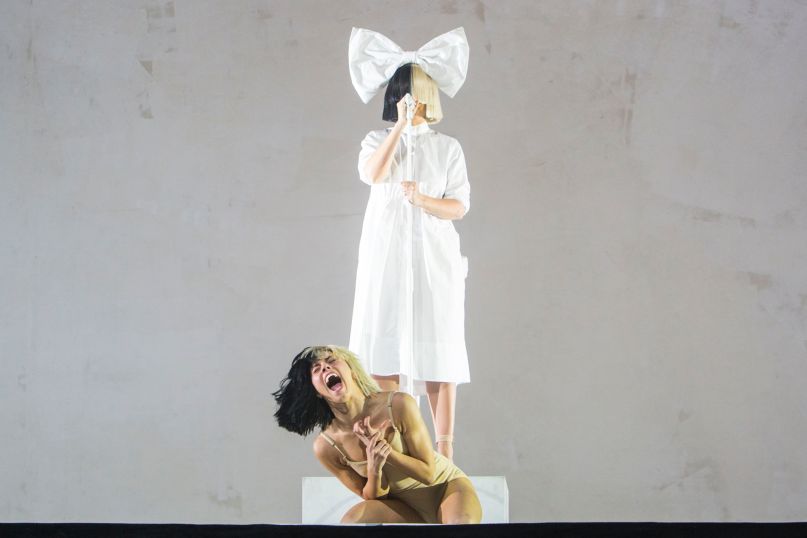 Technically Calvin Harris served as the headliner of Coachella’s third and final day, but it seems like Sia’s performance is all anyone wants to talk about. The South Australian singing sensation hit the stage in Indio Sunday night for her first full concert set since 2011, and by all accounts, it was truly something to behold.

Sia performed a 13-song set jam-packed with her many penned hits, including Rihanna’s “Diamonds”, “Cheap Thrills”, “Bird Set Free”, “Elastic Heart”, and “Chandelier”. An impressive troupe of celebrity dancers, including Maddie Ziegler, Kristen Wiig, Paul Dano, and Tig Notaro, visualized each performance, appearing either onstage or onscreen. As she has in so many music videos, Zielger served as the singer’s emotional trope, bringing to life the rawest of emotions. Dano served as a customer service rep, answering phone calls between songs, and at one point, dancers donned giant stuff animal heads. It was all very surreal.

“The oddity of seeing something closer to performance art than pop music onstage during Coachella was captivating for thousands, but seemingly confounding for just as many,” wrote Billboard in its review. “At a Coachella defined by surprise pop-star cameos, Sia’s performance Sunday night cleverly flipped the script,” said the Los Angeles Times.

Over on the Coachella subreddit, the top-trending tread is titled, “Sia just gave the concert performance of a generation,” with words like “unique”, “magic”, flawless”, and “impeccable” being thrown about in the comment section.

Whether you missed the performance live, or just want to experience it again, the entire thing is streaming in below. Our full review will be posted later today.