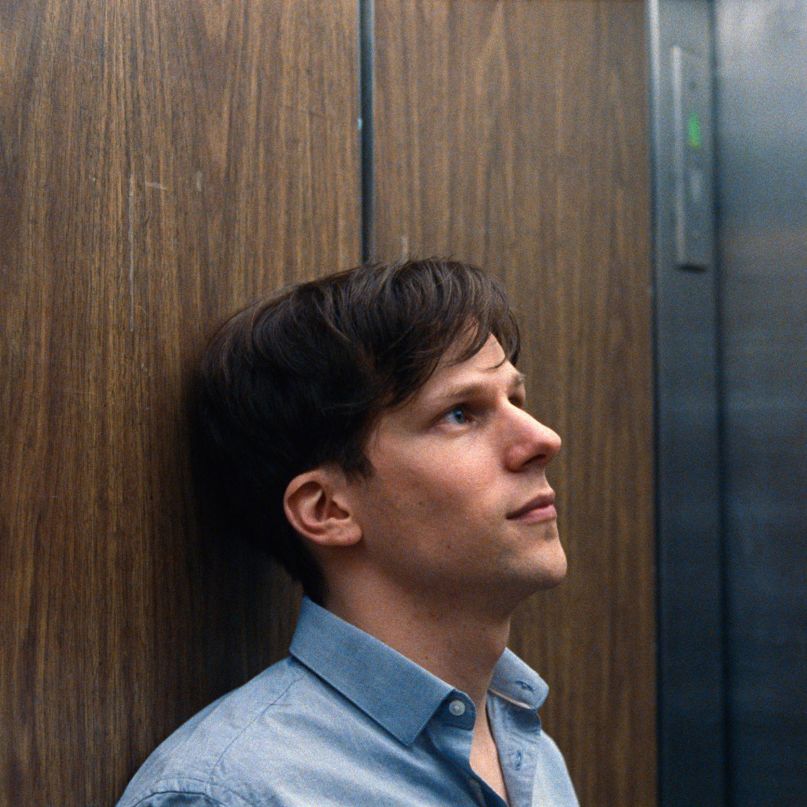 Joachim Trier’s Louder Than Bombs is a ghost story disguised as a domestic drama. The ghost in question is that of famous photographer Isabelle Reed (Isabelle Huppert), whose life ends with a cruel dose of irony: all her life she has survived working in war zones, but within months of retiring she is killed in a head-on collision back home in the States. Perhaps irony is the wrong word, because we learn early on that Isabelle may have been the culprit in her own demise, bored into suicide after permanently moving back in with her husband Gene (Gabriel Byrne) and two sons Jonah and Conrad (Jesse Eisenberg and Devin Druid).

The film opens a few years after Isabelle’s death, with all three men still picking up the pieces and trying — mostly failing, really — to achieve some degree of normalcy. Jonah has moved out and married a woman who has just given birth to his first child, but he can’t seem to look straight into the eyes of a future that’s far happier than his past. Wandering the corridors of the hospital mere hours after his son’s birth, he runs into an ex-girlfriend (Rachel Brosnahan) and decides to rekindle things then and there. It’s a preposterously unlikable move followed later by several others, but the fidgety Eisenberg somehow retains a degree of empathy as he slowly alienates himself from his new family. He’s much more at home here than in the acting horrorshow he put on in Batman v Superman, and it’s a reminder that repulsive actions aren’t the sole province of supervillains. Sometimes, they’re perpetrated by the people we love the most.

Jonah leaves his new family to return to his old one, retreating to his childhood home and burrowing himself in his mother’s old photographs in search of something resembling an answer. His father, Gene, is short on answers of his own. Conrad has morphed from a precocious 12-year-old into a teenage portrait of angst; though he was never told exactly how his mother died, he remains psychologically devastated by the loss. And so this is the situation we find ourselves in not 15 minutes into the film: confronted with three men at various states of maturity, all of whom remain haunted by the ghost of the woman they loved most.

The film’s real irony isn’t the nature of Isabelle’s death, but the fact that her surviving family members feel so much more comfortable communicating with the dead than with the living. Gene tried half-heartedly to initiate a conversation with Conrad, but his efforts veer into creepy territory — he stalks his son after school and even creates a character in an online computer game in order to hunt him down in virtual reality. Jonah essentially ignores his wife and baby, checking in on Skype periodically but mostly cloistering himself in his mother’s old office as he learns unsettling truths about her life. And Conrad can’t bring himself to so much as talk to his crush, resorting to writing a long and strange diary entry that he plans on just leaving on her doorstep; it seems as if creepiness runs in the family.

All three men, however, have a rich relationship with Isabelle’s ghost. She appears to them in dreams and fever dreams, in photographs just now being unearthed, and in flashbacks that enter the film unannounced, forcing the viewer to sit up and pay stricter attention. Trier, whose previous films include the fantastic Reprise and the equally fantastic Oslo, August 31st, has a distinct way of making reality seem like a dream and vice versa. He adheres mostly to a linear narrative structure but plays around with it haphazardly, inserting Isabelle liberally within fantasy sequences and flashbacks until we can hardly tell the difference anymore.

This may come across to some as sloppy filmmaking, and it may be true that Trier has bit off a bit more than he can chew here. But it also reflects the reality of the film’s three protagonists, who live so comfortably inside their pasts that the present becomes vague, blurry. And don’t even talk about the future. Louder Than Bombs moves along at a deliberate — and, at times, plodding — pace, though again in doing so it is merely reflecting the reality it portrays. The only character who can be said to take a meaningful step forward is Conrad, who ends up walking his drunken crush home from a party on the same night he finally learns about the circumstances around his mother’s death. When she stops to pee in a driveway, he turns around and cries. It’s probably the film’s most powerful image, Conrad realizing in two ways at once that people aren’t always what you build them up to be.

By the time she’s zipped up, however, he’s wiped his tears away and returned to his stone-faced self. This is typical of a film in where there are no grand speeches, no violent screaming matches, and only quiet modes of resolution. Louder Than Bombs doesn’t provide much catharsis. The big reveal about Isabelle is apparent pretty much from the start, and it can’t be said that the men she leaves behind ever truly learn the error of their ways. This isn’t to say that Trier’s film is not profoundly moving; at times, it is. But it also acknowledges that life doesn’t hinge on simple turning points — that you don’t wake up one day, as David Byrne might, and realize that this is not my beautiful house. Real emotional change is such a slow and rare thing that, when you finally do perceive it, the feeling is almost supernatural.