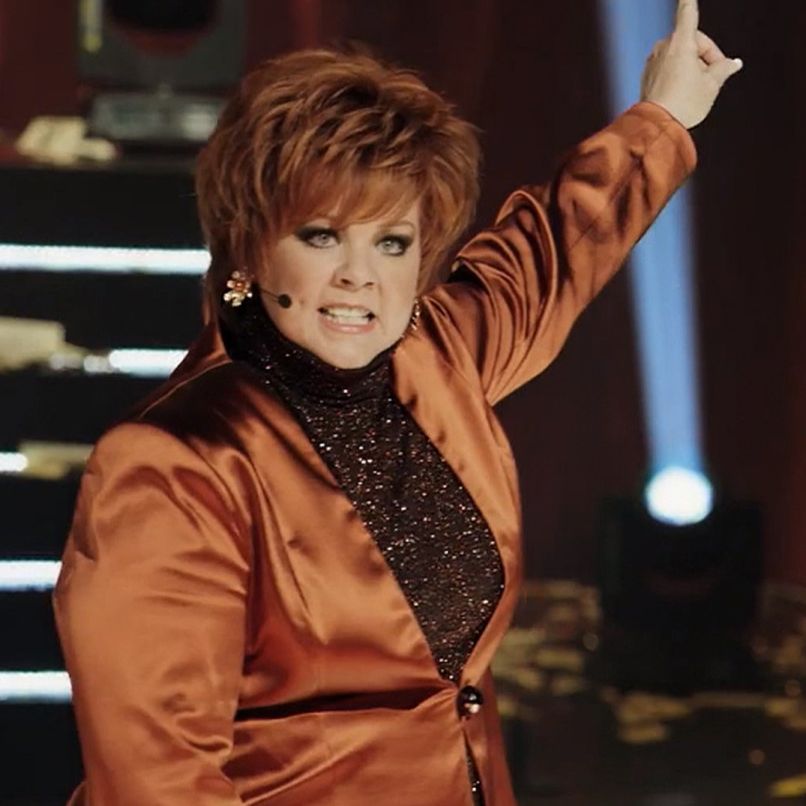 Early on in The Boss, the prickly Michelle Darnell (Melissa McCarthy) is trying to schmooze old colleagues at a country club and get back on her legs. They find her tangerine veneer off-putting, and her volume upsetting. Think Trump, but less political, more securely motivated, and just as grotesquely loose with tanner. All these guys in argyle vests roll their eyes and turn their backs. One particularly effete golfer dad stresses to Darnell that nobody likes her.

Not only does Darnell reject this claim, but she dresses all of these dudes down one by one. McCarthy was born for the fast-talking comedian’s game, and as a job strategy, it’s curiously tempting wish-fulfillment. McCarthy’s vulgarity is amazing, and she doesn’t mince words so much as she mangles guys with them. She bangs on their insecurities, faults their corporate ladder whoredom, slams their geeky outfits, and totally gets the last word, walking away the victor in spite of a dopey gag where she falls down a few stairs. Never mind that she’s contradicting herself, the pleasure’s in the surreal anger of her words. Wife’s dead, fella? Aww, so sorry, but Michelle assures the man she’ll say hello to his wife in hell. McCarthy is aces at roasting and eviscerating. It’s a testament to the creation and presentation of McCarthy’s character that her bluster walks, talks, and manages to take down a few jerkoffs along the way, and it’s just satisfying.

It brings pleasure to conclude that The Boss is a medium-good movie. This is Troop Beverly Hills: The Reckoning. After their muddled but well-meaning Tammy, McCarthy and her husband Ben Falcone’s follow up is a superior mix of jokes, to the point that even when the film misses its mark, McCarthy and her crew wheel and deal to the bitter end.

McCarthy is the titular Boss, and Darnell a fallen finance maven. She has a hustler’s ambition and graceless taste (absurd amounts of bright glitter and silk below her turtlenecks), but most importantly, she’s good at what she does: making money. Michelle’s introduced at the United Center for a full-house finance seminar with T-Pain on the mic, back-up dancers, and a flaming phoenix that carries her in. It’s a grand orgy that would make Tony Robbins blush. Of course, she’s bemoaned as shrill or blunt by colleagues and peers. But you know, to cop the Laurel Thatcher Ulrich quote, which is so key to The Boss’ successes, “well-behaved women seldom make history.”

The plot quickly arrives as Darnell’s scorned colleague and lover of all things Sun Tzu, Renault (a splendidly awkward Peter Dinklage), gives her up to the feds for insider trading. Busted, broke, and without a friend in the world, Darnell squats in her former assistant Claire’s (Kristen Bell) tiny apartment in Wrigleyville. What does it matter that the apartment’s in Wrigleyville? It should be noted that McCarthy is like the new Vince Vaughn: her career spun off from a $200 million summer comedy hit, she’s equally verbose, and her roots in and penchant for Chicago shows.

Darnell befriends Claire’s daughter Rachel (Ella Anderson), and together the three brainstorm the next great American venture: a brownie business for young girls that puts profits back into college funds. “Darnell’s Darlings,” Darnell brands her guerilla girl org. On the way back up, Darnell strong-arms the Margaret Dumonts of the world, hea-butts and tries to stab the competition, and verbally assaults anybody and everybody, all while learning a thing or two about humility and family.

Overall, the film is meat-and-potatoes comedy: establishing shot, scene, funny quip, next scene. And those scenes are marked by rambling improvisation until a moment has some comedic value. Boss is certainly post-Apatow in that regard, and from a formal standpoint the film’s not especially dynamic. Falcone slacks when it comes to drumming up emotions or big ideas about cut-throat business. Perhaps there’s a sneaky big business comedy a la Big Short beneath the punching-bag humor, but The Boss isn’t interested in it. This is humor less about intent and more about brash actions and harsh words. What counts is how funny the lines are, and McCarthy’s a worthy investment. She’s never bland, even when she whiffs.

McCarthy’s craft is the crass, and she’s pretty easy to label as “worth the price of admission.” At one point, Darnell asserts that her “tongue’s always been her sword,” and … well, yeah. Absolutely. McCarthy has millions of similes, punchlines, and unembarrassed deliveries in her word bank. She spends five committed minutes likening Bell’s breasts to “wet sand,” “sad basset hounds,” and countless other images. McCarthy, with an open robe, cheerily brags about her “vag-univation.” Soon after, she makes common-sense jabs at complacent Girl Scout badges like “Social Butterfly” that are given to young girls who can politely carry a conversation. Darnell suggests the badge just depict a woman ready for blowjobs, and demands something prouder. Granted, those are the highs in Falcone’s film, and it warrants mention that, for each big laugh, there’s usually a little dead air surrounding it.

Take an early bit where Darnell gets her teeth whitened. Several minutes consist of Darnell wearing hooks in her mouth, talking inaudibly, and waiting for a shine job from Claire. The joke’s a little tricky to find, but eventually the scene turns into the Mr. Show “Everest” sketch, evidencing the “rule of infinity”: keep repeating, linger on the joke as long as it takes, and eventually it will be funny. Here, after all the gibberish, eventually Darnell’s wide-open mouth becomes funny, if nonsensical.  A few scenes roll like that, but the promise of the film’s premise typically delivers, and it’s all thanks to McCarthy. She always fights for laughs in that way, and she’s savage here. She dominates The Boss.