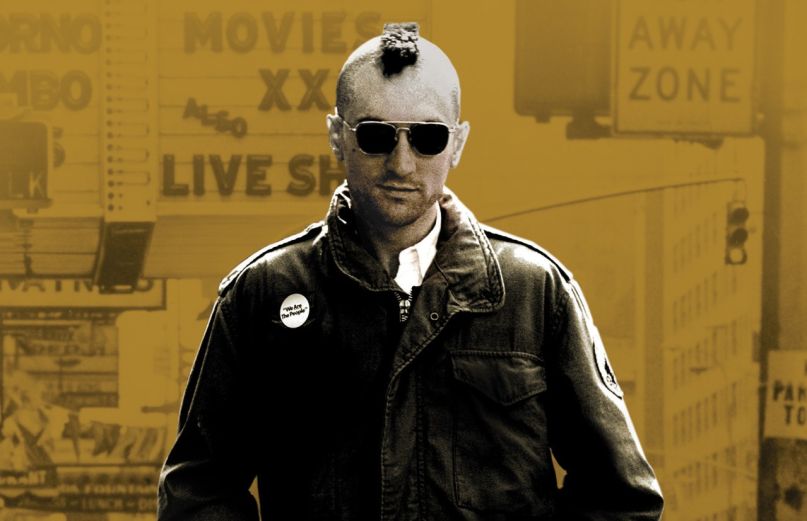 Forty years ago, Martin Scorsese sent electricity down the spines of cinephiles and critics worldwide with his fifth feature film, Taxi Driver. Set across the sprawling, dangerous streets of 1970s New York City, the psychological thriller captured the post-war terror of Vietnam and shed a light on an American nightmare that most preferred to ignore.

On April 21st, the film’s cast and crew will reunite at Tribeca Film Festival for a special screening and panel. This week, however, The Hollywood Reporter published an intriguing and in-depth oral history that paints the behind-the-scenes picture of not only the film’s production but also the era that gave us the film.

We’ve collected five startling takeaways for your leisure, but know it’s worth a full read.

On the impetus behind the film:

Paul Schrader: I had a series of things falling apart, a breakdown of my marriage, a dispute with the AFI, I lost my reviewing job. I didn’t have any money and I took to drifting, more or less living in my car, drinking a lot, fantasizing. The Pussycat Theater in L.A. would be open all night long, and I’d go there to sleep. Between the drinking and the morbid thinking and the pornography, I went to the emergency room with a bleeding ulcer. I was about 27, and when I was in the hospital, I realized I hadn’t spoken to anyone in almost a month. So that’s when the metaphor of the taxi cab occurred to me — this metal coffin that moves through the city with this kid trapped in it who seems to be in the middle of society but is in fact all alone.

I knew if I didn’t write about this character I was going to start to become him — if I hadn’t already. So after I got out of the hospital, I crashed at an ex-girlfriend’s place, and I just wrote continuously. The first draft was maybe 60 pages, and I started the next draft immediately, and it took less than two weeks. I sent it to a couple of friends in L.A., but basically there was no one to show it to [until a few years later]. I was interviewing Brian De Palma, and we sort of hit it off, and I said, “You know, I wrote a script,” and he said, “OK, I’ll read it.”

Paul Schrader: I had written the character of the pimp [that Harvey Keitel plays] as black, and we were told by Columbia we had to change it to a white guy because the lawyers were concerned “if we do this and Travis kills all those black people at the end, then we’re going to have a riot. And we’re going to be liable for this.”

Jodie Foster: Part of the deal was that any scenes that felt uncomfortable sexually, they would have an adult be a stand-in. So my sister Connie, who was over 18, stood in for a couple of over-the-shoulder shots.

As a kid, I thought it would be a job like all the others, but when I got there, I realized it was creating a character from scratch, which I’d never done before. I’d just been asked to be myself. It was eye-opening for me. Robert De Niro and I had a bunch of outings, where he took me to different diners around town and walked through the script with me. After the first time, I was completely bored. Robert was pretty socially awkward then and was pretty much in character, which was his process. I think I rolled my eyes at times because he really was awkward. But in those few outings, he really helped me understand improvisation and building a character in a way that was almost nonverbal.

Paul Schrader: During preproduction, I headed uptown, just talking to people on the street, looking for the great white pimp, and in the middle of it all I ended up at a working girl’s bar and struck up this conversation with this girl [Garth Avery] who was kind of strung out and very, very thin. Very close to this character that I wrote. I asked her to come back to the hotel — we were staying at the St. Regis because it was cheap — and told her I’d pay her, but it was not about sex. Around 7 o’clock in the morning, I slipped a note under Marty’s door that said, “I’m going downstairs to have breakfast with Iris. You must join us.” We watched her pour sugar on top of her jam, the way she talked, and a lot of that is in the diner scene in the movie.

Jodie Foster: She plays the girl who stands next to me in the street in the movie. I talked to her a little bit, but they were more interested in her mannerisms, how she dressed and walked. I hated my costumes, though. At the fitting, I was sniffing back tears because I had to wear those dumb shorts, platform shoes and halter tops. It was everything I hated. I was a tomboy who wore knee socks. But I got over it.

On creating sets and the dangers:

Michael Phillips (producer): We built Travis’ apartment and Iris’ apartment in condemned buildings. We had to hire a gang to protect us from other gangs. It was very arduous. It was a tight schedule, we were over from the beginning, and there was lot of pressure from the studio.

On the iconic mirror scene:

Paul Schrader: Bob called me and said, “Well, in the script, it says that he pulls out the gun, looks at himself, talks to himself. Well, what’s he saying?” I said, “He’s just a kid in front of a mirror playing with his gun. Just make up stuff.” I figured whatever he made up would be better than writing those kind of lines.

Martin Scorsese: It was the last week of shooting. We were in a building that was about to be torn down on Columbus Avenue and 89th Street. We were running behind schedule, and I knew Bob would have to say something to himself in the mirror, and I honestly didn’t know what it would be. I just remember squeezing in this scene on that angle that you see in the film, the head-on angle. I was sitting at Bob’s feet, and then he just started talking to himself. So I just kept encouraging him to do that.

Robert De Niro: I was having difficulty with the gun, but we got it and that was used in the scene. The mirror thing was just something that I improvised that felt right. Marty was always good and easy about trying things.

Martin Scorsese: After about an hour and a half, our assistant director was pounding on the door to say we’ve got to get going. I opened the door and said, “Please, just give us another 15, 20 minutes. We’ve got something really good here.”