A 4/20 show at a Sunoco was never meant to be, but a crowd of rowdy fans showed up anyway 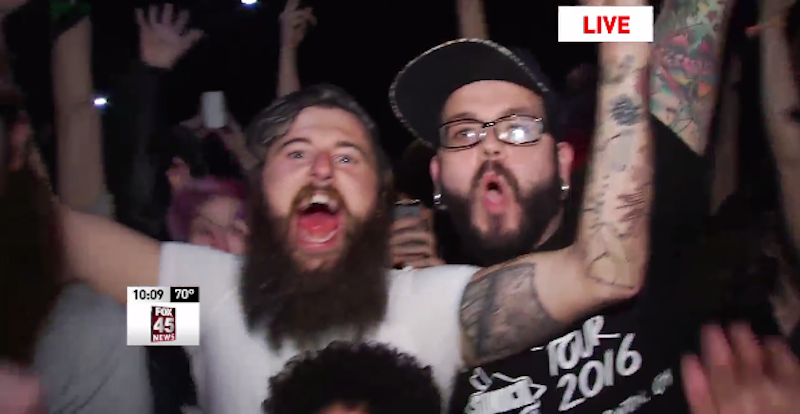 For all the uncertainty of life, there were two things I thought I could claim were real truths. One, that Limp Bizkit fans were largely a thing of the past, and two, that the last interesting thing to happen in Dayton, Ohio was the invention of the airplane. In one unbelievable news story, the latter belief was solidified, while the former was demolished.

In the days leading up to April 20th, the marijuana enthusiasts’ holiday known as 4/20, a hoax went viral across Facebook. The post claimed that Limp Bizkit would be playing a free show at a random Sunoco gas station in Dayton to celebrate the smoke-friendly day. Frontman Fred Durst and the Dayton Police Department both came out and said the show was not real, and the guy behind the hoax even confessed. Yet despite this, a crowd of fans still showed up at the gas station, forcing it to close for the evening.

According local network affiliate Fox 45, the Sunoco shut down in anticipation of the non-event, so the crowd of rabid Bizkit heads gathered in a grassy knoll across the street. Though most in attendance seemed like good-humored, slightly intoxicated folks who knew full well the concert wasn’t real and were just looking for some fun, there were a few who felt let down by Limp Bizkit’s no-show.

“It’s a little disappointing, but [Fred Durst] might be around here,” said one fan who drove about 30 minutes with his friend to see their favorite band. “He might be in one of them buildings watching us. So we really don’t know that.” God bless that optimism and logic.

Other fans told Fox 45 they hoped the hoax would “see the band get a lot of notoriety,” which is something they desperately need in 2016. Another saw the media attention as a good thing for the city, saying, “I’m hoping that the community can rally around Fred Durst and Limp Bizkit’s music and just make Dayton a kind of cool spot that we could all come to and rock out.”

Police eventually told the crowd to disperse, which they did without incident. Look, it’s impressive that there are enough diehard Bizkit fans to even make this story a reality. On the other hand, how little must there be to do in Dayton on 4/20 that this story is a reality?

See Fox 45’s coverage of the 2016 Limp Bizkit Sunoco Shutdown below, along with a few Instagram images of the crowd.

Previous Story
Would you like fries with Michael Keaton? Trailer for McDonald’s biopic The Founder drops — watch
Next Story
R.I.P. Prince, legendary musician has died at the age of 57
Popular
More Stories
[fu-upload-form form_layout="media" title="Submit Your Photo"][input type="hidden" name="ugc" value="1"][/fu-upload-form]