A strange and wild Localchella bill proves quite successful 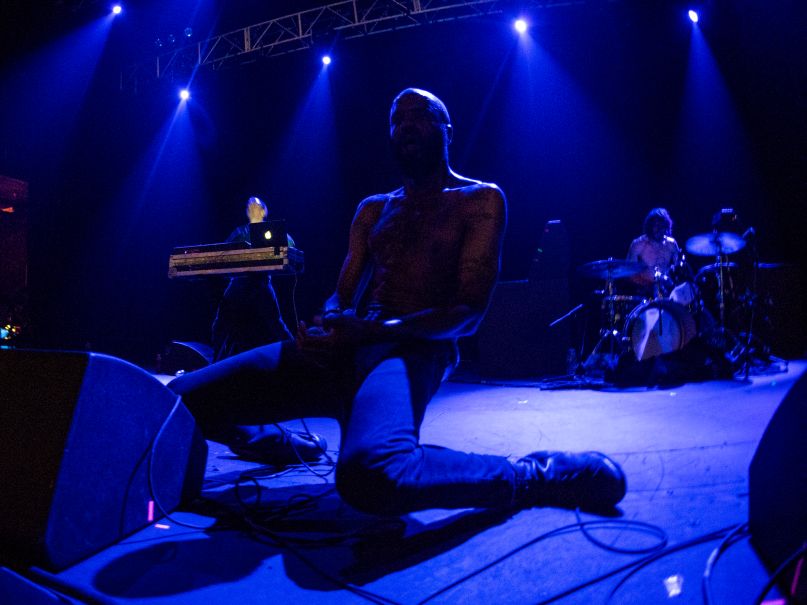 Among all the Localchella lineups, Wednesday’s pairing of Death Grips with openers Savages at Pomona’s Fox Theater was the most successful.

At first glance, it was probably puzzling for most. First off, Death Grips rarely (if ever) has openers, and of all possibilities, why place a post-punk band with an experimental hip-hip group? Yet a more in-depth side-by-side of the two acts reveals the reasons: both of them make music with an aggressive streak that translates into an assault on the senses live, they’re equally steeped in the “noise” genre, and, at the simplest level, their names sound cut from the same cloth.

Ultimately, though, the unraveling of events at this particular gig established the strongest case.

A quick scan of the capacity crowd – overwhelmingly teenaged and brimming with antagonistic energy — suggested that most people showed up solely for the headliner. A quick verbal survey of the front rows seemed to confirm it: The majority (I’d guess about 80-90 percent) were diehards for Death Grips, and virtually no one among those ranks had any knowledge of Savages beyond their moniker. They were largely ambivalent toward the U.K.-based quartet.

But that changed quickly when – among dramatic white accent lights and plumes of fog – frontwoman Jehnny Beth began lunging and sneering at the crowd during opener “I Am Here”, not wasting any time in signaling her approval of a rowdy crowd by climbing on top of people to crowd-surf and snarl through “Sad Person” and “Husbands” while guitarist Gemma Thompson, drummer Fay Milton, and bassist Ayse Hassan mercilessly deployed their sonic battering ram.

After pummeling the audience with some of the heaviest off recently released sophomore album Adore Life (“Surrender”, “When in Love”, “I Need Something New”), the band annihilated the gates of inhibition with “The Answer”. the harbinger of a full-on mosh pit that Jehnny literally dove into, raging with the floor-level fans for the duration of “Hit Me”.  At other shows, Savages have thrown in some more of their brooding/melodic tunes like “Adore”, but here they stuck to the hard stuff, keeping up deafening volume with closing cuts “No Face” and “T.I.W.Y.G.”.

It was a perfect tactic – they assuredly won over at least a few hundred of Death Grips’ faithful, a few of whom will likely catch Savages’ Coachella fest encore tonight in the Mojave tent. More importantly, they provided the perfect warmup for the literal riot incited by the headliners.

It’s no exaggeration: From the confused cacophony of “Lost Boys” through the industrial din of “You Might Think He Loves You for Your Money but I Know What He Really Loves you for it’s Your Brand New Leopard Skin Pillbox Hat” all the way through manically unhinged closer “I Break Mirrors with My Face in the United States”, the audience appeared as a maelstrom of flying fists, elbows, and occasionally entire bodies as more than a few crazed fans in the upper floor level launched themselves purposefully over the railing, some of them quick enough to barrel into the GA throng while other unfortunates got tackled by vigilant security guards.

To an outsider, all that may sound like a pointless parade of violence, especially because it was nearly impossible to actually see the band (the room was kept almost pitch-black with only minimal blue backlighting on stage). But in a roundabout way, there is a goal.

Their shows function like real Fight Clubs without actually leaving each other broken and bloody. They’re about attaining mental and physical release as the trio – wild-eyed and shirtless MC Ride, constantly snarling keyboardist/producer Andy Morin, and wildly thrashing drummer Zach Hill – overwhelms fans’ faculties with the sonic ethos of a hardcore band. Seeing the contented looks on countless young faces – a few bruised but none overly worse for wear – as they filed out revealed that aim achieved. And no matter how you look at it, catharsis camaraderie amid utter chaos is a beautiful thing.