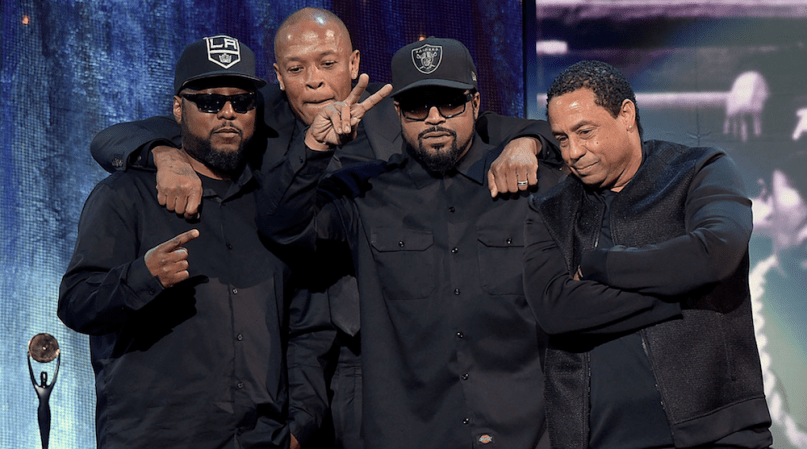 N.W.A. were formally inducted into the Rock and Roll Hall of Fame last night following a heartfelt speech from Kendrick Lamar. The legendary MCs, who chose not to perform during the evening’s ceremonies, expressed gratitude for the mighty honors with their own powerful acceptance speeches.

As Variety notes, the remaining members of N.W.A. — Dr. Dre, Ice Cube, MC Ren, DJ Yella — also used their time at the mic to call out Gene Simmons, who recently made some controversial comments about hip-hop and its future. Speaking to Rolling Stone, the KISS rocker claimed that “rap will die” and that he is “looking forward to the death of hip-hop.”

MC Ren hit back first, saying, “I want to say to Mr. Gene Simmons that hip-hop is here forever. We’re supposed to be here.”

Ice Cube then told the crowd why N.W.A., as well as the hip-hop genre, have a rightful place in the Rock and Roll Hall of Fame. “The question is: ‘Are we rock ‘n’ roll?'” asked Ice Cube, “And I say, ‘You goddamn right we rock ‘n’ roll.”

He concluded, “Rock ‘n’ roll is not conforming to the people who came before you, but creating your own path in music and life. That is rock ‘n’ roll, and that is us.”

Ice Cube had plenty more to say in his speech, and you can read the whole thing below (via Rolling Stone):

This is really very exciting for us, you know. We’re very humbled tonight. We’ve come a long way from being so hated, even in the industry, to making it to the Rock & Roll Hall of Fame. It just shows that if you believe in yourself, believe in what you doing, nobody can stop you. You can only stop yourself, and that’s what got us here, and I’m very grateful and humble tonight.

I’d like to thank my parents, Doris Mosie Jackson, my brothers and sisters, Clyde, Pat, Sophie, for putting up with them turntables and speakers and all that damn noise we was making. I’d like to thank my lovely wife, Kimberly. Who’s been there since day one, through the thick, the thin, and the thick again. And my kids. Darrell, O’Shea, Jr., Karima, and Sharif. Thank you for putting up with this crazy life of mine in entertainment. This crazy schedule. You guys make everything normal for me. You guys make everything normal and I love y’all for that.

Starting with Dr. Dre. Man, thank you so much, Dre. I wouldn’t be here without you at all. And thank you for believing in a 15-year-old B-boy, letting me ditch school and hanging out with you and make music. Stay in school kids, goddamnit.

MC Ren, who’s always a ruthless villain. He’s our temperament in N.W.A, he’s our conscience. He keeps us on track.

DJ Yella, man, thank you, man. He kept it fun, as you can see. DJ Yella kept it fun. Even when the whole world seemed like it was against us, DJ Yella was just like, “Fuck that, where the party at?” I love you for that.

I want to thank D.O.C. He’s a member of N.W.A too because he helped write a lot of lyrics, and know Ice Cube gets a lot of the credit, but it was a team effort with me, Ren, DOC, Dr. Dre, Eazy-E, and so I want to acknowledge D.O.C. for being down for so long. I wish he was here.

Yo, and to the man. The man. The late great, often-imitated, but never duplicated Eazy motherfucking E. This is his vision. He wanted us to be honest, he wanted us to be truthful, say what we feel. He didn’t care if we got any record play. He didn’t even care if we got signed to a major label. All he cared about was for our story to be recognized and heard. So we love Eazy, we miss him. I think about him all the time because he was such a smart businessman and he knew the pulse of the people. So we going to miss Eazy-E and we’re grateful to his family for allowing us to do the Straight Outta Compton movie. We just all feel blessed for Eazy-E’s life, and I hope we all remember him forever.

So rock & roll is not conforming. Rock & roll is outside the box. And rock & roll is N.W.A. I want to thank everybody who helped induct us into the Rock & Roll Hall of Fame, and I just want to tell the world, “Damn, that shit was dope.”